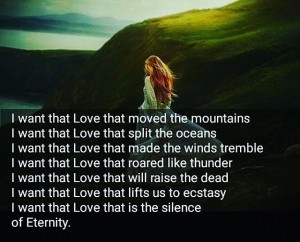 Revolutionary love, or any kind of love, has not been considered the purview or state of being of all people.  Scholars have played an important role in using ideas about love to reassert feelings of estrangement, difference, and exclusion.  Europeans in the 18th and 19th century used love and its connection to Sufism to create distinctions between Western civilization, European culture, colonial society, and the Islamic tradition.  More recently, both Muslims and non-Muslims have used the idea of Sufism and its connection to love to distinguish between authentic and inauthentic Muslims. By uncritically adopting the theme of Revolutionary Love and positing love as universal, the AAR has overlooked how “love” has been and continues to be used to construct “the West” through the exclusion of Muslims.

In the 18th century, European scholars introduced the term Sufism to European languages. These scholars were working within a colonial context, and their work conformed to the social and political expectations of their time.  Islam was often viewed with hostility; it was opposed to European culture, legal and harsh in its monotheism, and overly ritualistic. Scholars were often confronted with data, such as Persian poetry, that seemed to challenge these preconceived notions.  Some of this data included Sufis who believed that a person could annihilate his or her sense of self and move closer to realizing tawhid (unity with God) by loving God. This passionate love of God was often symbolized, in poetry, through romantic love between humans.

To dispel this dissonance, scholars separated these writings, which they found appealing, into the category Sufism.  By disconnecting “Sufism” from the category Islam, they also separated Sufism from the social and political context in which it was practiced.  This made love something outside of and opposed to the Islamic tradition.  Scholars could then look for the origins of Sufism outside of the Islamic tradition or Arab culture.  Sufism was rendered as a disembodied philosophy that reflected timeless, transcendent wisdom, making it safe for Americans and Europeans to enjoy and consume.

The construction of Sufism was not only a project to create distinction between European ruling classes and colonial subjects.  It was part of the construction of a modern, Western identity. The positioning of “Europe as harbinger of universal history, as a prototype of unity amid plurality” allowed Christian ideas to be presented as universal, Western ones.  This identity was constructed as unifying, while also a promotion of plurality, but exclusion was a necessary step in creating this new identity.

Divisions between Sufis and Muslims continue to be employed by groups besides early European scholars.   Modern and revivalist Muslim groups employed the split by blaming Sufism for a host of issues troubling Muslim society during the colonial era.  For them, Sufism was something that needed to be removed for Muslim societies to once again flourish. Alternately, internet pop culture on Instagram and Facebook presents Sufi love poetry, especially that of Jalal al-din Rumi, as universal, not Islamic, wisdom.

One of many examples on Instagram of people presenting Sufi poems about love as timeless, universal wisdom.

These memes promote the inclusion of Sufi (often framed as distinct from Islamic) ideas into our universal understanding of love. When Sufism’s Islamic context is acknowledged, it is often framed as authentic or true Islam, opposed to or persecuted by bad or inauthentic Islam (which is legalistic, ritualistic, opposed to the West, etc.).  For example, during the Park51 controversy Sufis were categorized as good Muslims, as a group that stands for love, pluralism, and tolerance. The continuing distinction between Sufis and non-Sufis, good and bad Muslims, allows us to acknowledge the important place of love in the Islamic tradition, while nevertheless excluding many contemporary Muslims from it.

Focusing uncritically on revolutionary love as an inherently inclusive topic encourages scholars to authorize certain kinds of Islam over others as part of our ongoing engagement with and construction of the West.  Revolutionary love has been used to exclude as well as include, and it is important that we do not embrace a theme that forces us to do the former.  If we do, Bruce Lincoln’s concept of “disappointed love,” the practice of fine-tuning and mobilizing familiar feelings of estrangement to insure alien groups are still seen as such, might be a better theme.

One thought on ““I belong to no religion. My religion is love”: Sufism, Religious Studies, and Love”