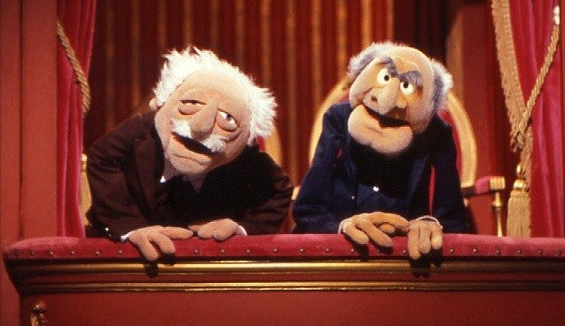 A yesterday a colleague posted a blog with three hypotheses on the topic of studying a thing called American Religious History — concerning how it may very well be a nationalist project, from start to finish (no matter how it is done), and that it is a discourse that may have historical continuities with (and practical effects akin to) the world religious discourse that so many in our field now claim to critique.

His point, as I read him, was not how to do it better but why we do it in the first place.

Apart from agreeing with much of the post — after all, how much convincing would we need to see a [insert some other country’s name here, especially one you generally disagree with] scholar’s focus on religious history in [re-insert that other country’s name here] as a nationalist exercise? — I found particularly interesting one of the comments that followed the post. It reads:

To my surprise, I really liked your ideas in this piece, especially the idea of how Robert Baird has helped frame what counts as worthy to be studied as “religion in America.” I say “to my surprise,” because I think that deconstructionist projects like this often focus on what one recent scholar has in JAAR has typified as the production of knowledge alone, not on its consumption (one of the major problems this scholar had with Russell McCucheon [sic]). So…it’s great to have scholars like you focusing on the production of categories, but its not so great if that’s what every scholar does all the time. I get worried that some scholars, like McCucheon [sic], suggest that we should just be doing the former as religious studies scholars. I don’t think you’re advocating for that.

Without worrying too much about the journal article being cited (which, yes, I read a couple weeks ago and which seems to me to be using my work as a bit of a strawman, to be honest — that is, I don’t think that particular author and I are talking about the same things at all, to be honest), what I find fascinating about the above comment is that I don’t think I’ve ever offered a critique without trying to make plain not only the alternative assumptions that allow me to make the critique but, more importantly, without outlining (sometimes in a fair bit of detail) an alternative way of, for instance, going about doing our research, designing and teaching our classes, carrying out faculty searches, professionalizing graduate students, or maybe even organizing departments and their curricula.

This started with the very first article I published; in fact, the last chapter to my first book, Manufacturing Religion (1997), opens as follows: 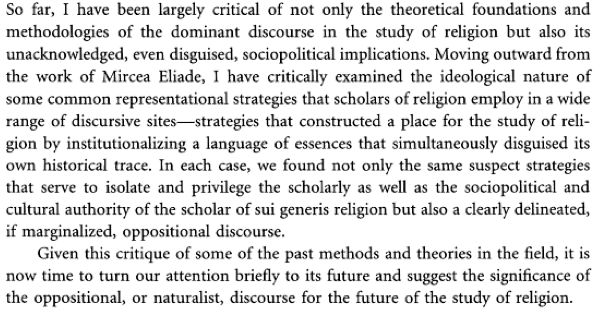 I then went on to offer a chapter on how I (at least back then) thought the field ought to be organized and our work carried out. Some of my views have changed since then, yes, but there’s always an alternative on offer.

So what am I to make of someone who says that I never offer constructive suggestions, that all I do is criticize other people’s use of categories without every offering alternative ways to do our scholarly work?

Well, it seems to me that this reading of my work — a reading I’m rather familiar with, actually — confirms much about the problems that I see with the field, for it seems that the truths that I call into question are so sacrosanct that inviting readers to re-consider them is read as exceedingly controversial, so much so that some may not even be able to continue reading to the end of the essay or the chapter, or stomach tackling another piece by me. I’m being provocative for effect here, of course, but how to account for readers not seeing the alternative that’s being proposed by means of the critique, as the very basis for the critique?

Perhaps because the alternative is, to some readers, utterly unimaginable given the unquestioned place, for them, of the item I’ve called into question. For everyone now seems to know all about the critique of the category religion — yawn — but that hasn’t stopped everyone from still studying religion, right?

To rephrase: if it’s unthinkable to critique X then how much more difficult will it be to imagine doing Y in its place? So they don’t see the alternative because no alternative is imaginable.

So I’ll close by offering a hypothesis of my own:

Readers who disagree with the proposals I’ve made over the years, and thus those who disagree with the sort of field that might result from their implementation, sometimes opt not to even see those proposals as proposals — which seems a pretty good way to caricature my work as overly negative, deconstructive, just lobbing insults from the balcony, and not offering constructive alternatives. It’s yet another way of making an easily toppled strawman.

It’s a rational response some readers might have. Either that or all they’ve read of me was an article someone picked for them one week in a method & theory grad course. Or maybe they just saw the cover of one collection of essays that had the word “critic” in the title.

9 thoughts on “A Word from the Balcony”