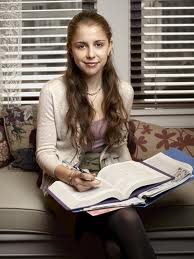 Kate Burton also plays attorney Victoria Adler on the series The Good Wife, and to that show I would now like to turn. The Good Wife‘s central character is Alicia Florrirck (Julianna Margulies), a woman estranged from her politician husband, Peter Florrick (Chris North), whose misdeeds force him to be removed from public office as Cook County state’s attorney. A recording of Peter’s adulterous affairs is aired endlessly on all forms of media; on account of his political crimes, he is incarcerated in the Cook County Jail for a time during which Alicia, who had been a housewife for the last decade or so, realizes she must make her own way in the world. She eventually lands a job as a first-year intern in the prestigious law firm of her former Georgetown classmate (and subsequent lover) Will Gardner (Josh Charles).

Religion appears on this program explicitly from time to time. During the first season, for example, Alicia defends a family of orthodox Jews whose practice of Sabbath day rest is the point of contention in a lawsuit. Additionally, the religious affiliation of one of Alicia Florrick’s law partners (and her husband’s political advisor) has been referred to in numerous episodes over the years. Indeed, writer Rachel Shteir has described the character Eli Gold (Alan Cummings) as “the future face of careful, largely deracinated Jewish-American politicians.” But for the most part the characters depicted in the program lack both religious background and commitment.

In this context, two representations of religion stand out. In the first, Peter Florrick attempts to make amends with his political base, the African American community. As part of a campaign to get his old job back now that he is out of jail, Florrick approaches Pastor Isaiah Easton (Gbenga Akinnagbe), whose church is a significant center of power and influence (recalling Jeremiah Wright’s Trinity United Church of Christ, perhaps). An early appearance during a worship service with his reluctant wife and estranged family is awkward. Subsequently Florrick meets with Easton for spiritual counseling. But the classic “born again” narrative (the same paradigm Juliette Barnes rejects in Nashville) does not seem to track well with voters and is perceived by some, perhaps even Florrick himself, as an empty political gesture. The gesture comes to a halt when the church council suspends Pastor Easton and endorses one of Florrick’s opponents.

The second appearance of religion arises in relation to the Florrick’s teenage daughter, Grace. In an effort to make sense of her father’s infidelity, her parent’s separation, a new school and a new home, and other changes, Grace starts to follow a young on-line evangelist, Jimmy Patrick (Ismael Cruz Cordova). Patrick’s sermonettes are highly critical of parents in general and are pitched to a teenage audience that is “looking for answers,” as Ulysses Everett McGill (George Clooney) says in O Brother, Where Art Thou? (2000).

On one occasion, Grace goes missing for a day. It turns out she went across town to be baptized. Her devotion to Bible reading and religious questions has been a recurring theme in the show, much to her mother’s befuddlement. In a recent episode, Grace initiates a conversation about death with her mother in the aftermath of a great tragedy: “If there is no God,” Grace asks, “why is that any better?” “It’s not better, it’s just truer,” her mother replies; “it’s just not wishful thinking.” This conversation will likely continue in episodes to come.