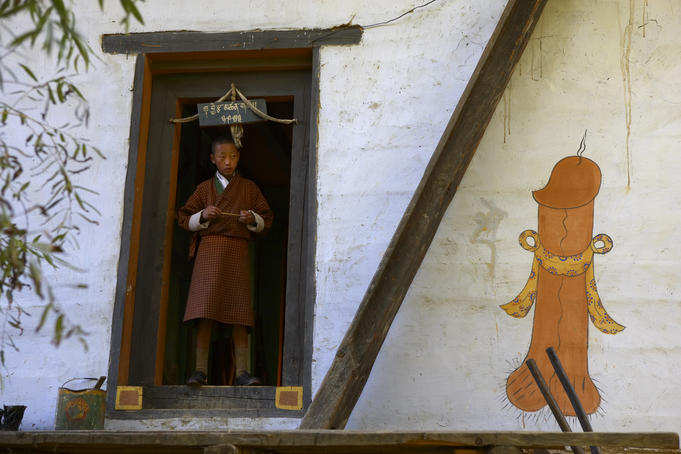 THIMPHU, Bhutan (RNS) For centuries, Buddhists in this tiny landlocked Himalayan kingdom have had a special devotion to the most unusual of objects: the phallus. Painted on the walls of their homes, hanging from the eaves of their houses and seen in vehicles and on rooftops, images of the phallus are an essential part of Bhutan’s traditional ceremonies….

So opens a recent Huffington Post article, ripped straight from the 19th century’s headlines. For if you want to see how very little has changed over the past 150 years in the public discourse on “the Other,” then just read this article.That our own titillating hang-ups with “private parts” is on display in such stories, far more than those fanciful paintings of penises, is the least interesting thing here, to me, though it’s pretty interesting, of course. After all, quotes such as the following, from a 2011 Huff Post piece on the very same topic, are all about us, not them.

“Oh, golly,” said an elderly woman visiting from Seattle, when she stepped off the bus in the Punakha valley and found herself surrounded by an alarming concentration of penis imagery, set against a magnificent Himalayan backdrop.

And yes, gender issues are surely ripe for discussion too, but I’ll leave that to others to tackle. Instead, I find fascinating the article’s much repeated notion of “phallus worship” (or “penis worship” as phrased in that 2011 piece), as if these people are somehow devoted to male reproductive organs.

That is, while we have tremendous nuance when it comes to understanding our own in-group habits (“Oh, it’s about what the flag represents…”), we quickly resort to such simplistic generalizations and shallow descriptions as soon as it comes to understanding anyone else. Sure there is a hint that the imagery is linked to fertility practices (of which we have many ourselves, right? So why are these so intriguing?), but the article nonetheless rings of our European intellectual predecessors arriving on distant shores and pronouncing the locals as being “idol worshipers.”

Now that’s a grabber of a headline. How can you not click that? And there’s photos!

Case in point: who among us would say that Christians worship a cross? What’s more, in a literal reading, the cross is nothing but a symbol of ancient Roman imperial might, the means by which is put criminals to death, right? So, if we adopt the same interpretive approach as this article to all those crosses on people’s necks or walls of their homes, what would they end up looking like to a reader? Sadistic death worshipers perhaps? Or maybe even law and order buffs? How odd would that be?

Sure, the article seems to celebrate this seemingly ancient tradition, but the fact that it stands out as interesting at all, worth writing about — whether it is valued or shunned — strikes me as part of the problem that deserves some attention. For at least as scholars of religion, as opposed to sensationalist journalists, I think we can do better than to trot once accepted but now antique evolutionary theories of religion — the thing driving the article’s claim that

An animist ritual, which predates the arrival of Buddhism in Bhutan, is still practiced in western Bhutan….

to make sense of what people do with their time and their energies. For if this is animistic then what good luck charm, what claim about tradition, even what reader attributing meaning and intentionality to the leftover writings of a long dead author, isn’t animism?