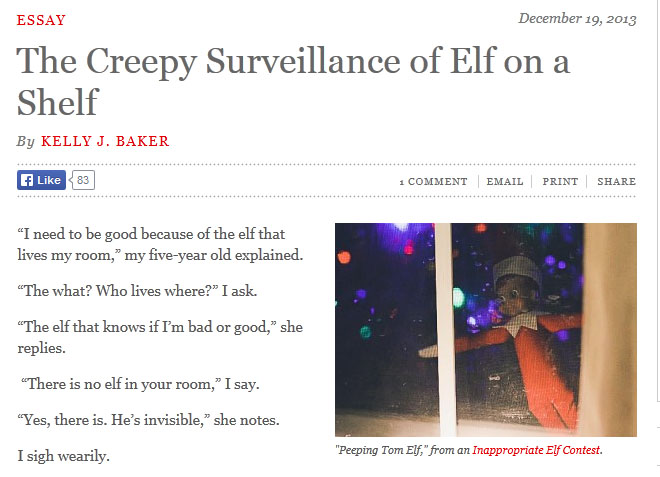 Did you spot this essay online? Maybe you already know about the phenomenon known as The Elf on the Shelf — if not, it’s creepy. Or at least that’s what we’re told — a story book and accompanying toy elf that sits quietly, watches and listens, and reports back to the North Pole.

The creators … encourage children to talk to their elves—especially to share secrets. The elf can learn more about the children, the more they share. Telling the elf secrets seems to secure a space on the nice list.

The parallels to the NSA wiretapping are too powerful to be overlooked.

What I find curious is how the parallels to, say…, the widespread belief in an all-knowing, all-powerful God seem to be overlooked. Re-read the essay and put “God” everywhere you read “elf” or “Santa,” or maybe just re-read that above indented quote and think about prayer — which some scholars are now taking very seriously — and then what would you make of the article?

My point? I continually find it fascinating what scholars of religion think they can criticize and what they think they can’t — that is, how they distinguish between what they must take very very seriously as deeply deeply meaningful and what they can just dismiss as kind’a creepy. So, as a scholar, I don’t much care if having Big Brother, Santa, or an omnipotent God looking over my shoulder is naughty or nice; instead, what’s interesting to me is how people (colleagues included) seem to normalize some intrusions and not others. For I can’t imagine Religion Dispatches publishing a critique of how creepy it is to tell God your secrets in hopes of finding oneself in heaven some day.

Because I’ve caught a fair bit of flack over the years for advocating the role of critic and not caretaker, this topic attracts my attention. So, given RD‘s description of itself — “Because we’re observers (but not necessarily observant), respectful but not reverent, we tackle stories that others can’t, or won’t” — I wonder how they navigate when to be irreverent and when to tow the party line?

For when is creepy surveillance just endearing attentiveness?