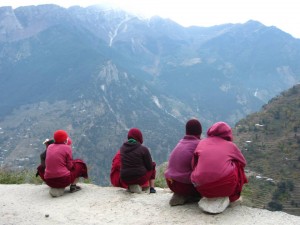 Hannah Etchison, a graduating senior majoring in Religious Studies with a minor in Asian Studies, spent six weeks of this fall in India, staying primarily at a monastery where she learned from the women staying there and helped them with their English. Don’t miss her previous posts about her experiences (Hannah Goes to India 1, Hannah Goes to India 2, iPhones, Monks and the Images We Construct, Immediate Relativism).

I’ve been getting it a lot: “how was India?” I generally follow up with adjectives like amazing, incredible, life-affirming, or “the best place ever.” But I’d be more than happy to go into more detail, since I think at least some people are genuinely interested in what it’s like to teach English on a mountaintop Tibetan monastery to a bunch of Indian nuns.

Some interesting information on where I went: Jampa Choling is a small women’s monastery located in Meeru, Kinnaur. There was one Tibetan teacher and 20 nuns, 18 of whom I taught English. While there was one 40 year old and two elderly nuns, the rest were between the ages of 11 and 29. I expected an older crowd, as most people do when they hear the term “nun,” but the majority of the nuns were preteens and young adults. There was lots of energy at Jampa Choling which was necessary because of the hard work the nuns had to do each day, from maintaining the modest facilities to growing and preparing the food for 22 people, not to mention twice daily prayers, English, Tibetan, and philosophy classes, and huge portions of Tibetan text they had to memorize.

The nuns were from the villages in the area, coming almost entirely from non-Buddhist families, they had chosen to convert to Buddhism and join this small nunnery (the only one in lower Kinnaur) at surprisingly young ages. When they joined the sangha (monastic community), they took on Tibetan names and eventually received Tibetan Buddhist titles, like “Tenzin.” Their families and friends, who they still have contact with, are generally unfamiliar with Tibetan Buddhist practices, even though it was historically present in that area. They are still called by their Indian names outside, and often within, the sangha. They each have a nickname, with “Negi” being the moniker for the Kinnaur area. They spoke a mixture of Kinnauri, Hindi, and Tibetan among each other, with Kinnauri and Hindi being the norm outside of the sangha. Most of the older nuns could carry on conversations in English, thanks to the efforts of previous volunteers.

Without too much information on everything I did (six weeks passed quickly but not quickly enough for a single blog post), here is the rundown of “what it’s like” doing what I did where I did it.

After the two ten-hour bus rides I landed in Choling, which is more or less a bus stop at the foot of a mountain near a huge construction project. I was hours earlier than I was expected, but managed to phone the nuns who sent a taxi to collect me. I was then deposited at an apparently abandoned public telephone house, from which people in fact came and went. Eventually, after failing at making friends with some baby cows (apparently they don’t like Clif bars), the nuns found me and started guiding me up the mountain. I was told it was about an hour hike. That might have been true if I were going downhill with no heavy bags (I wasn’t even carrying them, the nuns were) and without the exhaustion of altitude difference. As it was, it was three or more hours to the top, with rests every five minutes or so. I did, however, survive and get to almost the summit of this Himalayan foothill to my new home, Jampa Choling.

Tea, welcome, dinner, bed. Well, it should have been. But when the excited but shy nuns left my room, assuring me that I could call on them whenever I needed, I saw it

It had eight legs and murder on its mind (probably).

I’m sure you can tell that I’m not a fan of spiders. Snakes, lizards, insects, even other arachnids, sure. I’ll be fine. Spiders? NOPE. But I wasn’t the first freaked out volunteer and the twelve year old nun next door made me feel like quite a coward as she expertly removed the spider to an outdoor location (what, you didn’t think Buddhists killed them, did you?).

I suppose I should be thankful for the incident, since it helped the nuns to relax around me and worked as a bonding moment (as it did every time thereafter, as well). In any situation with strangers, having a common experience helps to ease conversation and create friendships, though the warmth and love they showed me would have been more than enough without the spider adventures to cement the affection I have toward these girls and women.