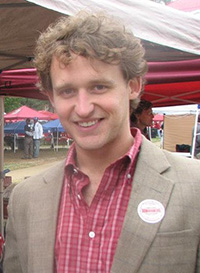 Tim Davis earned his B.A. in Religious Studies and Spanish in 2006. He went on to earn his J.D. at UA’s School of Law. He is now practices law, with an emphasis in civil litigation, in St. Clair County, AL. Tim wrote this piece for new REL students shortly before graduating.

As an entering freshman at The University of Alabama I knew that my older sister, a junior at the time, was a Religious Studies major but I had no clue as to what she studied. Because she told me that she had taken courses in Tibetan Buddhism and the Hebrew Bible, I assumed that Religious Studies majors did all of their coursework studying descriptive information about the different religions that are found throughout the world. In other words, I thought that my sister spent her day listening to lectures on topics like why Hindus don’t eat cows and what is the special relationship between Native Americans and the environment. So, I entered the program with the hopes of obtaining general knowledge about the major religions of the world, such as Judaism, Christianity, Islam, Hinduism, and Buddhism.

Assumption 1. “Religion” is a Stable Category

One of the first questions a student in an entry level Religious Studies class, such as REL 100, investigates is “What is Religion?” Students soon realize that defining religion is not an easy task, for they discover that opinions differ widely as to what practices, beliefs, and institutions get to count as religious. For example, it is clear that Karl Marx, who claimed in his work The German Ideology that “it [religion] is the opium of the people” and further that “the abolition of religion as the illusory happiness of the people is required for their real happiness,” would not agree with someone such as Mohandas K. Gandhi who, instead, claimed that all religions were true and beneficial to humanity. These respective definitions vary widely on how religion should be classified. Without a doubt this classification matters, because it portrays the interests of the respective definers. For instance, Marx’s definition of religion serves his ideology of revolution that would create a nonreligious communist state, and Gandhi’s definition serves his interest of bringing together Hindus, Muslims, and other religions to create a unified, independent India. Given these differences, students can come to recognize that religion, as a category, is not stable but, rather, is a highly debated topic. Further, students see that defining what gets to count as religious is one of the most important studies that the scholar of religion can undertake, because many times much is at stake in definition and classification. To take one final example, a group’s status as a religion in the United States is decided by the Internal Revenue Service, and whether the IRS recognizes a group as a religion or not has implications ranging from the group receiving or not receiving nonprofit tax breaks to receiving the protection of free exercise of religion under The Constitution of the United States (for example, see a recent US Supreme Court case in which the ability of a group to practice Santeria was challenged).

Assumption 2. One Must be a Religious Adherent in Order to Study Religion

Another misconception that is widespread regarding the study of religion is that one must be religious in order to study or know about religion. This assumption comes from the fact that many people believe religion to be a word that names a collection of privileged — that is, beyond critique — beliefs and behaviors. On the contrary, religion, as it is studied in the secular state university, is both a category and an aspect of human behavior that must be subjected to the same types of scrutiny as any other category of human behavior that one may study. For putting the word “academic” in the phrase, “The Academic Study of Religion,” indicates that one uses the same methods in Religious Studies that would be used in the study of other social sciences. Bruce Lincoln, a prominent University of Chicago scholar, makes this point in a brief article entitled, “Theses on Method” by saying: “The same destabilizing and irreverent questions one might ask of any speech act ought to be posed of religious discourse…. Reverence is a religious, and not a scholarly virtue.” By pointing out that one ceases to be a scholar when certain sets of data (in this case, religious data) are placed beyond critique — and by critique I mean granting no concession to a set of data while evaluating the motives behind the data and historical context within which the data is situated — Lincoln makes clear that religion (both the word and that which it identifies) is not privileged. Therefore, one does not have to be religious to study religion, much like one does not have to be an artist to study art.

When people learn that I am a Religious Studies major, it is common for them to ask me, “What religion are you?” People most likely pose such a question because they assume that Religious Studies markets different religions to its students so that they can each pick one from the list and become an adherent. In the same vein, Religious Studies is not a tool that helps one further a personal spirituality or faith. Likewise, Religious Studies does not seek to dissuade anyone from their particular religious beliefs; rather it merely studies religion as human behavior in the same way Political Science or Psychology study particular human behaviors. Hence the scholar of religion studies and teaches religion without advocating or denouncing the object of study (an approach known as methodological agnosticism, meaning that the types of tools, or methods, that scholars use prevent them from ever taking a stand on the truth of the thing being studied — what they may think in their personal life may be another thing, however); the scholar’s approach, then, seeks to ask questions about and find answers to those human behaviors categorized as religious. So, Religious Studies, as pursued in the secular state university, helps one to critically analyze the beliefs, practices, and institutions classified as religious, but does not teach one how to be religious. Since The United States’ Constitution guarantees that “Congress shall make no law respecting an establishment of religion, or prohibiting the free exercise thereof” and because state institutions (e.g., The University of Alabama) receive federal funding, then Religious Studies, as pursued in such institutions, must take the methodologically agnostic approach elaborated above.

With these common assumptions on the table, one can now see what the student pursuing a degree in Religious Studies strives towards: studying the who’s, when’s, what’s, where’s, and why’s of that set of data referred to as religion. By asking these questions with the methodology of a scholar such as Bruce Lincoln, the student of religion sees his or her object of study as an interesting facet of a complex human socio-behavioral world. Thus the student of religion studies those human behaviors that discourse — the sum total of assumptions, ideas, conventions, etc. concerning a subject — deems as religious. When one begins to ask the right questions, and look into the historical context of the data being studied, then one realizes that people the world over contest the category “religion.” In this light one sees that the student of religion not only studies world religions, but also that the student evaluates how and why an institution, movement, or group gets to count as a world religion.

So if studying both religion and the category “religion” as an interesting feature of the complex system of human behavior called society sounds appealing, then perhaps the Religious Studies major is right for you.