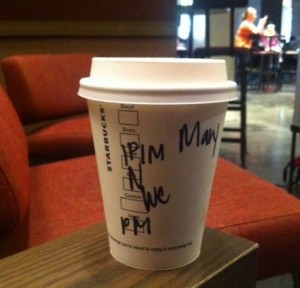 Becky is a PhD Candidate in the Department of Anthropology and will graduate just as soon as she finishes writing her dissertation on the Virgin of Guadalupe. She joined the Department of Religious Studies as a Graduate Teaching Assistant in the Fall of 2012, and was immediately enamored by the charming atmosphere, lofty office space, and pencils with “religion in culture” printed on them.

Recently in Dr. Ramey’s “Introduction to Religions of the World” class he was covering a topic dear to my heart: rituals. After class, a student asked, “So, any prescribed action done on a regular basis would be a ritual?”  Good question! Would it? The line between what is a ritual and what is a mundane act can be fuzzy, especially when the concept is placed in a classroom setting. (Funny how the “fuzzyness” of those topics we discuss so confidently always comes to the surface in a classroom setting.) I tried to explain that maybe it depends on how important that action is to you, drawing on my extreme fondness for my morning cup of coffee.

My response left me unsatisfied, but got me thinking… what if we thought about rituals from a slightly different perspective: the cost associated with non-performance.  I’m not sure if anyone has discussed rituals from this angle, but for me it brought some additional insight and (perhaps) clarity to the matter.

First of all, if the cost of non-performance of a particular act is a “tangible” cost (like if I don’t brush my teeth every night, then I could get a cavity), then would the act still be considered a ritual? I think not. I think what makes a “mundane act” different from a “ritual” is the intangible cost of non-performance. Back to my morning coffee to illustrate this point.  The tangible cost of not drinking coffee in the morning is falling asleep and/or being unproductive all day. This could easily be remedied with a soda or instant coffee on the go. But the act of drinking coffee is not really the ritual for me. To me the ritual is stopping by Starbucks each morning, being greeted by a cashier who knows my name and understands the logic behind my decision about what drink to order, waiting at the end of the bar for the cup with my name on it, and sitting down with my laptop and “enjoying” my coffee while I scan though the morning headlines. (I am quite sure the Starbucks marketing folks are well-aware of my morning ritual, as they have played a strong role in manufacturing it.) So in this case, I must look beyond my caffeine dependency and identify the intangible cost of non-compliance for me as something like a loss of joie de vivre, one little pleasure in life that keep me smiling. Doesn’t seem like such a big deal, right.

That leads me to a second insight of thinking about rituals from a “cost of non-performance” perspective: How great are the perceived costs? I use the word “perceived'” cost because I think it’s worth noting that the “intangible” cost would normally only apply to those who prescribe to the ritual. If you don’t “enjoy” coffee, then a mile-long line at the Starbucks counter ten minutes before class is insignificant to you; the perceived cost would be nothing. On the other hand, for the ancient Maya, the perceived cost of not performing human sacrifices was tremendous; the sun would quite literally refuse to rise the next day. The perceived cost for some Nigerians of not performing the yam festival is that a year of crops will be lost to famine. For some Mexican villagers, the perceived cost of not parading the statue of Saint Isidore in the face of drought is that rain will continue to elude them. What about other “costs” such as loss of social status? Loss of political position? I think we are even able to talk about these more subtle aspects of ritual performance from this perspective.

I’m not quite ready to start writing my book yet, but the topic of rituals is something that tends to emerge often in my own studies. So, maybe soon… but for now I shall simply enjoy my morning cup of coffee.

One thought on “Can Anything be a Ritual?”