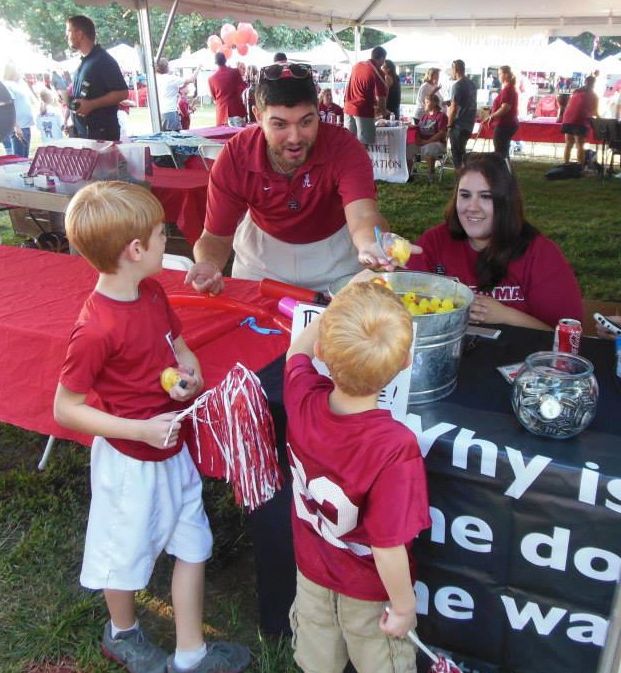 Several of our students and faculty members were at the College of Arts & Sciences’ tent this past Saturday for Homecoming, when Departments are invited to staff a table or two for a few hours and do something creative for fans and alumni attending the football game. There’s face painting and beanbag games, lots of candy and performances by students from the School of Music. While we can’t compete with the huge snakes that the Department of Biology always brings, we did have badly made balloon animals that were a big hit.

But the thing that we did that’s worth mulling over is that we had a rubber duck game — colored dots on the bottom of yellow ducks floating in water and, when kids picked a duck, they got a prize — trouble is that regardless how much attention our students paid to learning the color of their duck’s dot (and, to their credit, the students — like Lexi and Ben, pictured above — staffing our table really sold it each time), it turned out to be meaningless information because the prize was always the exact same duck that the kids had just plucked out of the water.

Some kids were a little disappointed, yeah, but most looked perplexed and were clearly trying to figure out what had just happened; the older ones thought it was neat (in fact, some turned the game into an experiment by repeating it, to see what prize they’d get next time) and all the moms and dads just stood back and laughed.

It was a lesson in a failed ritual exchange that causes anxiety in the participants — producing, in this case, the strange looks and the laughter. Chalk one up to critical thinking in practice.

I recall my dad, in the gas station that my parents owned and operated and in which I grew up, once being asked by a customer: “Can you change a $20?”. My dad said yes, took the man’s twenty dollar bill and put it in the cash register while taking out a different twenty and then handing it straight back to the man and closing the register’s drawer.

It was also very sophisticated.

[Thanks to Sarah Rollens for the above pic.]