One of the curious items from today’s announcement from the Vatican that Pope Benedict XVI will be stepping down at the end of February was that he made his announcement, at a meeting of Cardinals, in Latin. So few reporters there understood Latin that it gave quite a competitive advantage to Giovanna Chirri, who works for ANSA (Agenzia Nazionale Stampa Associata), Italy’s main news wire service. As noted on the UK’s The Guardian real-time news blog:

Might this be a pretty good argument for the value of a liberal arts education that includes the study of foreign languages? After all, unlike the video that was uploaded later (click to watch)… 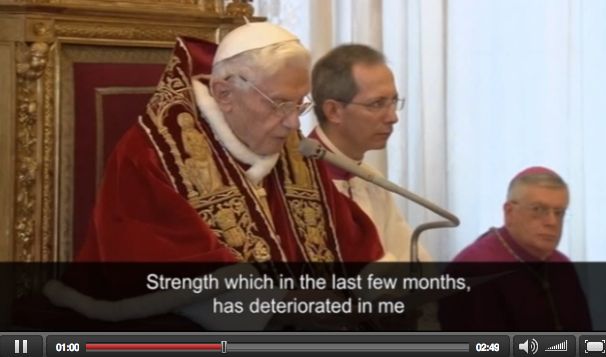 …, reality moves in real-time and doesn’t come with translations, subtitles, replays, or highlighting.