It’s not news to anyone to hear about the decline of the family-owned farm in the U.S. For example, consider this chart, from a 2007 article (click the graphic to go to the article), which tracks the dramatic increase in farm size, over the past 50 years, coupled with the equally dramatic decline in the total number of farms: 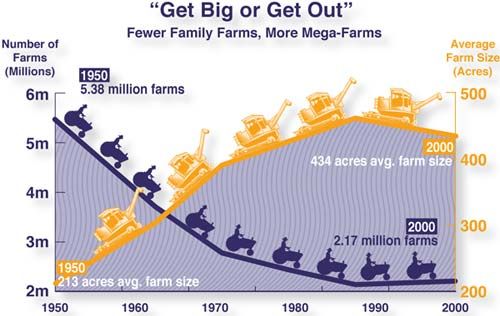 What, then, is one to make of the still strong nostalgia for hard-working, salt-of-the-earth family farmers that is easily found throughout modern U.S. culture? For example, consider the following commercial–narrated with somber authority by the late radio broadcaster, Paul Harvey (from a 1978 speech he delivered at a Future Farmers of America conference)–that aired yesterday, during the 2013 Superbowl:

Demographic Fact: family farmers are disappearing, to be replaced by large corporate-owned farming operations–agribusiness, fueled by changing economic and political conditions over the past several decades. Yet the idea of family-owned farms, and the hard-working, Marlboro-esque men (yes, mostly men are pictured) who once farmed them, are still venerated. So much so that artfully colored still photographs of this endangered species, posed in their natural habitat, prove useful to car manufacturers trying to sell their trucks.

So although there’s almost none of these actual farmers left, there’s apparently a little of them in every consumer.

What might a critical thinker make of all this?

6 thoughts on “So Madison Avenue Made a Farmer…”