It seems to me that much of this in-fighting results from squabbling over the scraps left after the real sciences–the Natural Sciences–get their bite of the budgetary pie. For its no small secret that research in the disciplines that comprise the Natural Sciences costs considerably more than research in the other two branches of the modern university (as I’ve jokingly said before, give me some books and a computer and I’ll produce and publicize some new knowledge), that the practical application of its findings is thought to be far more closely linked to private enterprise and therefore the profit-motive, and thus that its pay-scale is considerably more than the Humanities or Social Sciences (all of which likely pale in comparison to, say, the Business School or the Athletics Department, but that’s another story of the modern university…).

And besides, only the real sciences are based on hard data–that’s why we call them the hard sciences. Right?

When viewed from the position of, say, Physics or Chemistry, it’s not difficult to sit in judgment of the soft sciences, the pseudo-sciences–as the once famous physicist, Richard Feynman (1918-1988), phrases it in the following clip from the interview entitled “The Pleasure of Finding Things Out” (1981).

No wonder humanists and social scientists fight it out, if this is the position that sets the tone for what counts as legitimate, authentic scientific work.

At this point in a post, the astute blogger would try to turn the tables and might write something like: “It would be nice to have the opportunity to discuss with someone like Feynman the non-scientific rules that the real sciences have in place, but which their practitioners generally fail to see–in the same way that you and I fail to see the rules of grammar as we read and speak, type and listen–that enable them to have the impression of objectivity and control over their data.” Maybe such a blogger would then go on to add: “It would be refreshing to have a scientist reflect on, for instance, how the regularity of observation in no way makes what they call a law into a fact but, rather, a probability.” Perhaps even a reference or two would be in order to the manner in which the famed Logical Positivists‘ much coveted verification principle was eventually hoisted by its own petard, as they say, when it became painfully evident that it could itself not be verified empirically, making it (according to its own irresistible logic) a senseless (just “made-up,” as Dr. Feynman might ironically phrase it?) way to distinguish sense from nonsense.

But I’m not nearly that artful, being the fake scientist that I am; so, instead, I think I’ll just cite a recent business book that puts into practice much humanistic and social scientific research from the past fifty years, or so (ever read Theodor Adorno?), and thereby lays out a step-by-step process for making lots and lots of money by spinning a fiction around consumers, so that they no longer buy discrete items when they go to store but, instead, buy a lifestyle when they put their mass-produced gourmet coffee, their patented small-batch artisan bread, and their tastefully packaged cage-free eggs into their rustic, bleach-free recycled Trader Joe’s tote bag. To rephrase: no one wants to eat the demonic looking Patagonian toothfish but isn’t Chilean sea bass delicious? Or, as TV host and chef, Anthony Bourdain recently phrased it, while in Ecuador eating guinea pig, if they called it instead “petite suckling mountain pig” then people in the US would be ordering it in restaurants. 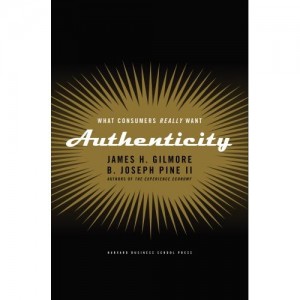 If you ask me, it seems pretty darned close to a law if Starbucks and Disney are getting rich by doing it, if we’re now so hungry for that rebranded ugly fish that we’re eating it nearly to the point of extinction, and if these authors and their publisher can make a profit from simply telling you how to do it for yourself. (There’s even a series of workshops!) Maybe humanists and social scientists would take some pleasure in finding out that their research has such practical, real world applications.

But then again, like the esteemed Dr. Fenyman, I too don’t know the world very well and so I might be quite wrong.