To be fair, I ought to answer my own question. And so…

When I use the word “Humanities,” not descriptively (as it now happens to be) but prescriptively (as I think it ought to be)–or, to put a finer edge on it, I’d prefer to talk about the Human Sciences, though I hardly mean the term as it is often used now–I think of a loosely knit collection of intellectual pursuits that focuses on the study of people (whether alone or in groups, themselves or the artifacts left behind) so as to complicate things. And they do this in a few ways: by taking the contingency of historical existence seriously–with a nod to Fredric Jameson’s slogan, “Always historicize!”, our motto should be “Things could have been otherwise” (it would sound so much better in Latin, I know); by keeping an eye on both individual agency and social structure at the same time (what I previously referred to by means of the old nugget, turtles all the way down); and by never forgetting that, while scholars are no less (and, of course, no more) a person than anyone else, they are also not necessarily involved in the social worlds that they happen to be studying. Scholars, in trying to say something about people that the people are not already saying for themselves, therefore bring their own interests (what we sometimes sloppily call a viewpoint) to the table. Organized systematically, and stated in a way that it could be defended, we could go so far as calling this a theory.

That’s what I mean when I use the word “Humanities.”

For me, then, the Humanities is a designation not so much for a unit of organization within the University, or a set grouping of academic disciplines, but, rather, for a style of scholarship, a set of attitudes, that we could find–but, sadly, too often fail to find–all across the University, regardless the subject matter under examination. It is a stand defined by the professor in class, the researcher in scholarship, the colleague in conversation, and not something determined by the supposed value or meaning of the object that happens to catch our eye. Somewhat akin to the starting point of the literary movement that we associate with the phrase, “the death of the author“–in which the idea of long-past authors leaving symbolic clues in a text concerning their intentions and meanings is re-thought as, instead, being a construct of subsequent readers, each of whose idea of the author overlaps little, if at all, with some actual human being who wrote the text (identified by Roland Barthes as the scriptor)–I see the object of study, whatever it is, not as defining the approach that ought to be taken in its study. Rather, the starting point is that scholarly theories and interests make things more or less interesting to us, worth paying attention to. I therefore side with Humpty Dumpty over Alice (in Through the Looking Glass [1871]): we are the master and not the objects that we study or use.

This is the attitude that I’d say characterizes the Humanities as I would like to see them practiced.

As an example of what it is that this sort of scholar ought to be doing, consider Jonathan Z. Smith, who is, perhaps, the most influential scholar of religion today, and yet one who has also written widely, throughout his long career, on higher education and pedagogy. That he has taught introductory courses all along, focusing mainly on undergraduate education, and has (despite this or because of this–now that’s the question!) been one of the most rigorous and prolific writers in the field, is what, for me, sets Smith apart. And it is with the introductory course in mind–not a survey, mind you, but, as Smith is careful to distinguish in his choice of words, an introduction, an initiation into a domain of knowledge, much as someone might introduce a new species into a specific environment–that I think we can best see what I have in mind when I think of the Humanities as a practice that complicates matters.

In an essay that has long been used by the University of Chicago (Smith’s almost career-long employer) to help train incoming graduate students to become teachers, Smith argues that the introductory course is not a place to simplify (as many assume it to be, such as those who teach surveys of English Literature or World Civilizations that pack in as much as they can in how many ever weeks they have at their disposal), for such an approach unnecessarily hides from our students (not to mention parents, taxpayers, and legislators, to name only three other stakeholders in public education) the hard work required to study human beliefs, behaviors, and institutions. The human choices, especially of the Professor who made the syllabus, and thus the economy of signification (a term that, for Smith, is the tip of a complex matter), is hidden from sight. And we do ourselves no favors, Smith argues, when this is the picture of our profession that we present to our students. In that essay, he writes: 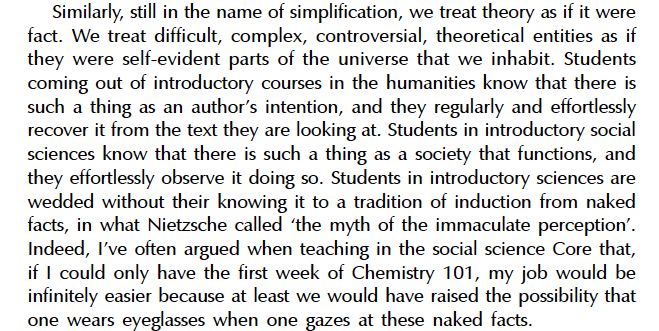 That my own interest happens to revolve around the category religion itself–its history and the utility of using it, in this or that way, to name parts of our social world in distinction from yet other parts–means that the taken-for-granted knowledge of my students, their folk knowledge about what is and what is not religion, is the very thing that I wish them to examine (Know thyself, as the old saying goes, gets written now as Make data of thyself). So it means that my own work in the classroom involves starting out by asking question that assume my students to be the experts–they, after all, know what religion is or isn’t–but then slowly complicating what may end up seeming to them to be, in hindsight, a surprisingly simple narrative. And because many of my peers in the field are from the same culture as my students, and thus work with the same folk knowledge that allows them to name this or that as religion (as pure, as authentic, as original, etc.), so as either to pay homage to it or criticize it, much of my writing adopts the same approach–take a simple thing, like say, a brief, two page 1893 U.S. Supreme Court decision on whether a tomato is a fruit or a vegetable, but then use it as an opportunity to complicate things, so that we can see some of the intricacies of the social situation of which this seemingly simplistic artifact is but the tip. The high court’s decision–like any artifact of human being–might end up being not as simple as it seemed.

While being no Platonist myself, I find this approach, ironically perhaps, to be in-step with the Socratic method that is much valued by traditional, Renaissance-inspired Humanists who assume that we are here to teach students the tools necessary for learning the art of living well–except now we seek complex answers to simple, seemingly naive opening questions. “Of all the ways to live, dear Euthyphro, which will count as living well?”

I recall talking, a few years back, to a Mathematician on my campus and asking him what he was teaching that semester. “A course on deriving proofs,” he replied, and, without me asking any further questions, he went on to express his frustration with the fact that the students were finding it very difficult. While many of them were quite advanced in terms of working within the rules (i.e., those tennis lines that we call axioms) of mathematics, few of them were able to consider that the rules themselves were historical products (i.e., the artifacts of past agents working within structured settings not of their making) that could be argued for or critiqued. 1 + 1 = 2 was, for them, the simple fact of the matter. These were the students, I presume, that Smith would like to get his hands on, during the first week of Chemistry 101, to suggest to them that, in order to get on with the business of talking about the content of any class, a number of interconnected assumptions needed to be in place, assumptions that are themselves historical products. I try to do much the same when I bring to my introductory students’ attention D. G. Burnett’s wonderful book Trying Leviathan, which focuses on an 1818 New York state “trial that pitted the new sciences of taxonomy against the then-popular–and biblically sanctioned–view that the whale was a fish” (to quote from the publisher’s blurb). For if I can persuade my students that the self-evidency of their judgment that a whale is a mammal has something to do with the onetime (but now exotically curious) self-evidency, to yet other people, that it was simply a big fish (as Herman Melville has Ishmael state in Moby Dick: “Be it known that, waiving all argument, I take the good old fashioned ground that a whale is a fish, and call upon holy Jonah to back me”), then I will have succeeded in complicating their taken-for-granted world and, perhaps, made them curious how elaborately authorized, and endlessly repeated, systems of classification, made by people and for people, make it possible for us to move around efficiently in the world by taking for granted that green means go and red means stop.

For the last time I checked, the world struck me as pretty complicated, e.g., an ally one day is an enemy the next, and your freedom fighters are my terrorists. It is a complication harnessed, to varying degrees of success no doubt, by our tireless efforts to simplify (what we euphemistically call understanding, translation, and interpretation, but also meaning, prediction, tradition, heritage, fate, etc.). Studying people and their past efforts to simplify therefore requires us to muddy the waters considerably, to recover yesterday’s choices so that, perhaps, students can be empowered to consider which decisions they wish to make tomorrow.

The Humanities therefore ensure that our students become players, whatever way they choose to play the game. The first step toward that is for the Professor to stop professing and, instead, to assume the role of the modest inquirer. The trick is in slowly persuading students that their expertise is itself the thing that should attract our attention. If done well, they won’t run off at the end, as poor Euthyphro did.

If you’re able to do that in a Religious Studies class then you’re in the Humanities. But if you’re able to do that while teaching the proofs to Math students (and keep in mind that the proofs for axioms are no more or less human products as well), then you’re also in the Humanities, regardless how an institution divides up the bureaucratic pie for ease of managing the payroll.

So when I use the word “Humanities” that’s what I stipulate it to mean, neither more nor less.