So, just what are “the Humanities”? We know that, at the University of Alabama, the 23 or so Departments that comprise the College of Arts & Sciences are divided among three divisions: The Humanities and Fine Arts; the Social Sciences, and the Natural Sciences and Mathematics. The Department of Religious Studies, like the Departments of English, Theatre and Dance (the British spelling is not a typo), and the School of Music, are grouped together in the Humanities, to name just a few of the others. The Department History, which, throughout the history of the European university was commonly placed within the Humanities–such as in the Alabama Humanities Foundation‘s description (below)–is, however, classed on our campus within the Social Sciences, along with such Departments as Psychology, Anthropology, Criminal Justice, and New College, to name but a few Social Science units–though, come to think of it, New College describes itself as an “interdisciplinary liberal arts program,” which complicates things further, for we now need to inquire into the relationship between the liberal arts (sometimes known as the liberalizing arts) and the Humanities. More on that below. 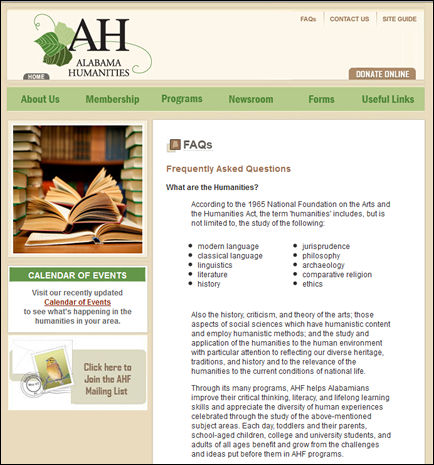 There once was a time when it was relatively easy to talk about “the human experience” or “the human condition,” as well as “the human spirit”–all things that scholars as far back as the Renaissance, and further back yet, thought all people shared inasmuch as they were human–sentiments, embodied in the artifacts that we create, that could not just be studied but also expressed, in a variety of ways. Unlike the quantification and explanatory analysis that we see in what we today call the Social Sciences–or so the standard argument goes–there is presumed by some to be a way to study this universally shared human experience that prioritizes finding meaning over causes, and thus relies on interpretation over explanation. (Geisteswissenschaften is what 19th century German scholars called this collection of systematic, scientific [German: wissenschaft] pursuits–those that focus on various sites where we find the manifestation of this human spirit [German: Geist], such that the reduction of the object of study–say, some cultural artifact that strikes us as curious–to merely mechanistic laws is seen as completely inadequate.) While the Social Scientist might wish to explain why someone is religious, the Humanist, as it was classically understood, wants to understand what it means to be religious. And for some, explicating and thereby reproducing that meaning is an inherently worthwhile pursuit. Thus we arrive at a common defense of the Humanities.

But today it is not difficult to find scholars from all across the university who critique the  notion of a universally shared “human experience”–seeing claims about “the human condition” instead as but one way that powerful but nonetheless local understandings are generalized and thereby exported outward to other people, sometimes on distant shores. For instance, to the question, “What is the American experience?” such a scholar might inquire as to whether you had in mind the experience of living in a ghetto or the experience of living on a private yacht. Or consider the way that feminists a generation or two ago had to rethink their use of “woman” once it was realized that its use in their scholarship had subtly normalized a very specific sort of woman–white, liberal democratic, upper-middle class, North American/western European. (Want an example of this type of critique? Consider the mid-20th century French scholar, Roland Barthes, and his little essay, “The Great Family of Man” [PDF], from his book, Mythologies.) In light of this critique–one that focuses on material difference over immaterial similarities–what sense does it make to talk about a universal, trans-historical sentiment that is somehow accessible by means of a coherently arranged set of intellectual pursuits called “the Humanities”? To rephrase: just what does the academic study of religion have to do with musical performances or theatre?

In 2009 Emory University began an initiative to talk about more publicly about the Humanities and their importance to the university curriculum; consider what Prof. Michael Elliott (of their English and American Studies Departments [though only the former are in the Humanities on our campus]) has to say about what the Humanities are by means of outlining what they have to contribute:

Which brings us all the way back to the liberalizing arts, or a liberal arts education–which is a modern way of talking about what was once considered a classical education in antiquity or even medieval Europe. A liberal education was one that was thought to that prepare a person (well, keeping in mind the dangers of generalizing, let’s be specific: that prepare free, land-owning men) to take on a responsible role as a citizen of the state, involving the study of rhetoric, grammar, and logic (you can see here the key role played by learning how to persuade others of your opinion in a public forum). To be liberal was therefore to be free (Latin: liberum)–free, in a somewhat ironic manner, to contribute to the larger social group as expected of you based on your place within it and your standardized training as a rhetorician.

So where does that leave us? Just what is the Humanities and what do it study? What do the academic disciplines organized under this umbrella have in common and contribute? Is “Humanities” merely a convenient placeholder for arbitrary bureaucratic organization? Does it name a shared exploration of transcendent human meaning as it is manifested across a host of cultural artifacts? Are these intellectual pursuits a way for (some? all?) citizens to prepare to contribute to the state? Or, keeping in mind how easy it is to overlook that only free men were once educated in this manner–that is, how a certain sort of self, the self-as-consumer for example, is authorized as if it is the only one–is it what the late-20th century French philosopher Michel Foucault might have called a technology of the self, a way of creating and managing a certain type of self, in specific sorts of of relations with others (or what he called governmentality)?

3 thoughts on “Just What Are “The Humanities”?”