I sometimes think of religion as an exquisite vase, passed down to me through many generations. I imagine its thin porcelain walls luminescent, burning with the sacred aura of its history. With pleasure I gaze upon the vase, until one day it tumbles from the shelf, shattering into numerous pieces. But I do not dismay; I gently fasten each shard together until, from fragmentation, a brilliant object once again emerges. I place it back on the shelf. Now as I gaze upon it I observe each tiny fissure, and through its translucent walls I indubitably perceive the specter of its social genealogy. Nevertheless, before me sits a magnificent vase.

In Mythologies Roland Barthes discussed the dialectic a cultural mythologist faces when confronted simultaneously with both object and knowledge. Barthes writes, “…we constantly drift between the object and its demystification…for if we penetrate the object, we liberate it but we destroy it; and if we acknowledge its full weight, we respect it, but we restore it to a state that is still mystified.” My personal odyssey through Religious Studies left me with a similar vertigo, drifting between my history and my existential experience.

Since I was a small child I attended a United Methodist church several times weekly with my mother. I always harbored a great fascination with doctrine and church history. At twelve I thought I might become a church historian and prayed dutifully that my true Christian vocation would be revealed. When I began in the Religious Studies Department I retained a nebulous interest in Theology and Christian history. The spring of my sophomore year I studied at the Hebrew University in Jerusalem. Jerusalem hemorrhages expressions of religiosity: a colorful Coptic mass outside the Holy Sepulcher, Orthodox Jewish men and women davening at the Wailing Wall, Muslim men performing the ablution outside the Al-Aqsa mosque before noon-time prayer, evangelical pilgrims attending the Stations of the Cross scattered along the Via Dolorosa. In the North of the country there are small Druze villages, Roman and Crusader sites, and the gardens of the Baha’u’llah. In the South, the Judean Desert is home to Bedouin tribes, Christian monasteries, Qumran, and secular kibbutzim. In the Palestinian territories there are the magnificent ancient cities of Bethlehem and Jericho and vibrant local markets. The landscape blooms with the prodigious beauty of diversity, of histories and traditions. However, the sacred canopy laid across the land is sheer and does not conceal the scars of conflict and violence and the economic inequality that persists for the Palestinians. I returned to the United States with images of astonishing beauty, but also with the sense of a world no longer animated by anything other than socio-economic forces. The faculty at UA helped me to ground my observations in social theory, and I began to see religion as a vital form of social behavior.

Despite my adamant agnosticism, I remain interested in the positive function of symbolic thinking in modern society. I approach religious myth as a device that assists a culture in naturalizing its history and social behaviors. While not discounting the more disturbing capacity of myth to communicate ideology in order to advance political and social hegemony, I am fascinated by the role of symbolic interaction in manufacturing social solidarity. There is an imperfect match between how practitioners of a particular tradition behave toward one another and the behaviors they direct outward to practitioners of opposing traditions. Nevertheless, certain religious myths (forgiveness, sanctuary, charity) improve the fitness of a group by creating a hospitable ground for social interaction. The capacity of religions to facilitate social cohesion leaves me optimistic and eager to continue my studies in graduate school.

Editor’s Note: Stephanie Cusimano has applied for Fall 2005 admission to several M.A. programs in Anthropology and Folklore Studies at universities across the country. 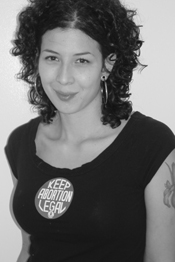