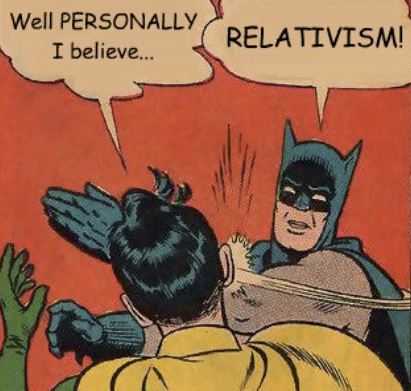 Relativism, and criticisms of it — “Oh, you’re a relativist!” — strike me as similar to claims of reductionism: the problem isn’t (as critics of reductionism claim) that one reduces one’s object of study to something other than what it already is, but that someone else reduces it to something different than what you want to boil it down to. That not a lot of so-called religious people are walking around spontaneously reporting that they’ve experienced a hierophany of a structure of human consciousness called the sacred (as one well known arch-nemisis of reductionists everywhere might have once phrased it) suggests that no matter what a scholar thinks lies at the base of religion, inasmuch as they think there’s a universal base they are all deeply invested in reducing complexity and difference to unity and simplicity. END_OF_DOCUMENT_TOKEN_TO_BE_REPLACED