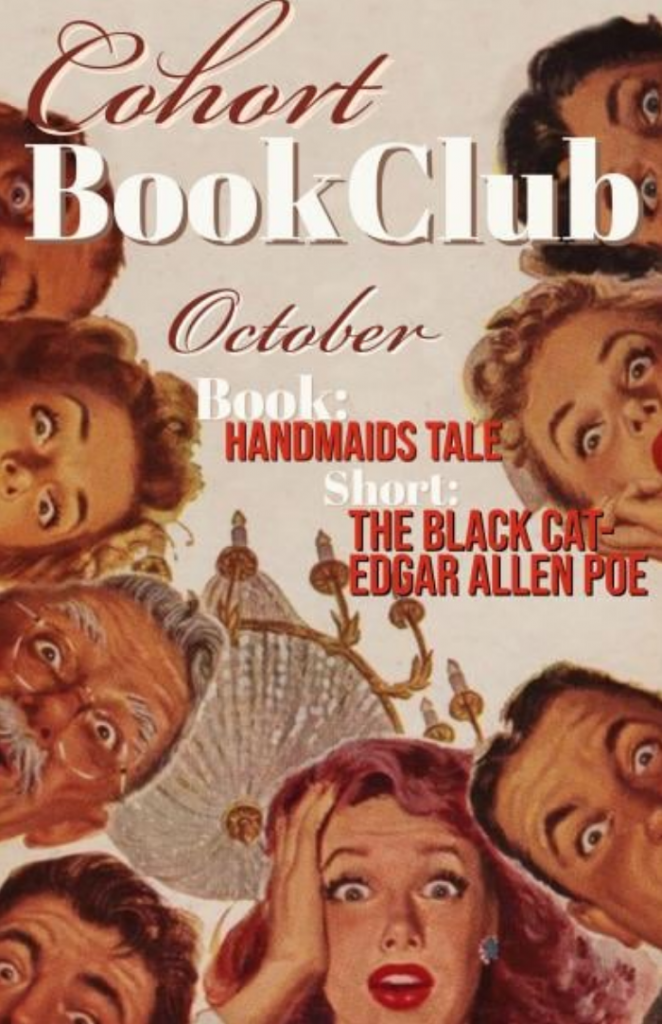 Erica Bennett, in her first year of REL’s MA, completed an Honors degree in Religious Studies/Sociology Anthropology at Millsaps College in Jackson Mississippi, where she spent much of her time either playing volleyball for the college’s team, participating in several different clubs and organizations, or coaching a local youth volleyball club. Once at UA, she wanted to create something that might help to bring her cohort together, in a year as divided and isolated as 2020 had been. REL shows great interest in expanding students’ writing and reading skills so she thought that there was no better way to do this than to start a book club and blog about the books — with this being her first, with more to come.

This was the baptismal month for the newly formed Cohort Book Club. This group was formed with the goal of reading a new dystopian themed novel each month. Partly to help our minds escape form the terrifying and almost dystopian America/world we seem to now inhabit, but to also give the members a way to be introspective into our ever-changing society. This is a place for insight, discussion, and criticism of our world while also a place to analyze what could be worse. For the first month, a month before the national presidential election, I decided that reading The Handmaid’s Tale would be most appropriate for this occasion.

Our maiden month was not a participant-heavy event. Only two members were able to read the book (we’re are all busy graduate students, after all). Yet even with only two people we had a great discussion of the book and our fears of it becoming reality. If you have never read The Handmaid’s Tale, I highly recommend it, but here is a quick summary:

Parts of America are now controlled by a once militia group based on conservative evangelical Christian beliefs. This new state is called Gilead. The state was formed out of desperation and fear brought out by a staggering drop in human fertility. Most people are no longer fertile or only give birth to very deformed babies leading to a dramatic decline in human population. This group believes that God is angry with humans, so in hopes of getting back to God’s path, we must live as close to the bible as possible. Women can no longer read or write, men control every aspect of life, clothes are extremely modest, life at every turn is controlled by what “the bible says” and there is very little technology (it’s all very Amish-like). Many people in this takeover were killed or converted. If you were a female sinner in the before time (characterized by premarital sex, non-heterosexual relationships, legal abortions, adultery, etc.) but could still have children then you would now become a Handmaid — women whose only job is to have babies for married couples who were unable to do so by themselves. This book is the mental journal kept by such a Handmaid.

During discussions we talked about what role we would want to play as part of such a society (a question I would like to keep for future books). There were answers such as “let me die, I would not want to be in this world” but also an interesting answer of being part of the rebellion. Though the main character doesn’t learn much about the group, there is an underground rebel group called Mayday. At the end of the book it ends with a cliff hanger of whether or not our main character will be saved by the group or doomed to her death. I found the common answer of “I want to be part of Mayday” interesting because I think we give ourselves too much credit. We love the idea of being the heroes but would that happen if we were put under the amount of brainwashing or physical and psychological torture as most of these characters were put under. Would we have the strength to do so? Maybe some of us would, but it is still curious that we all think of ourselves as having this ability to topple the oppressive regime. Maybe that is the goal of this book, to give the readers confidence that we do have the power to topple the institutions that do oppress us in our real lives.

This book is extremely sad while also finding places to bring joy in the case of rebellion. It makes you worry about the extremist fundamentalism today and if such groups will ever gain power, one day. Though the book only gives a glimpse of the life before the takeover, it also points to a world that’s nature was irreversibly damaged by nuclear power mishaps, climate change, and loads of other man-made disasters. It is a cautionary tale of what humans are capable of when under immense stress and fear of our species survival.