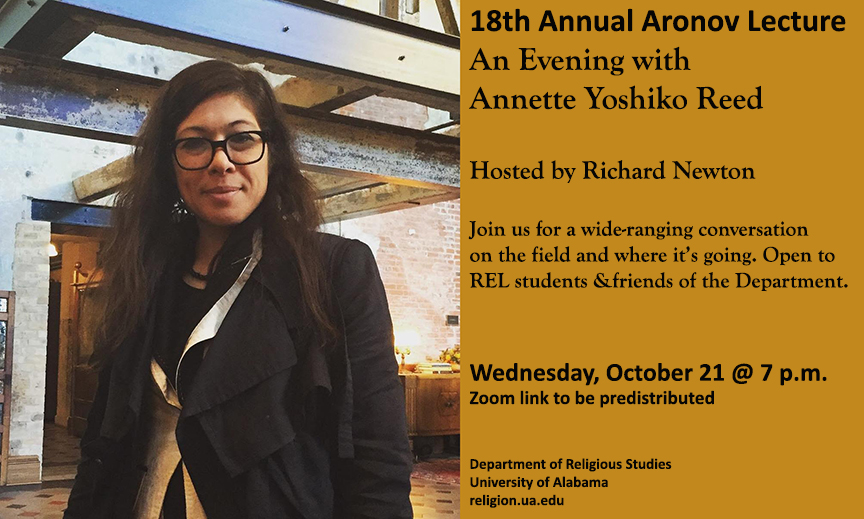 The Aronov Lecture brings to the University of Alabama renowned scholars of religion whose work can communicate lessons and insights relevant to the broader human sciences. One of our department’s two annual lectures, we are excited to host this year’s speaker, Dr. Annette Yoshiko Reed on the evening of Wednesday, October 21 at 7 pm (central time).

Dr. Reed is Professor in New York University’s Department of Religious Studies and the Skirball Department of Hebrew and Judaic Studies. Those familiar with her scholarship will know that she has been instrumental in reshaping how historians understand the tensions, rhetoric, and myths invoked in the construction of Jewish and Christian identities in the Late Antique Mediterranean.

You can get a sense of her incisive blend of social theory, historical analysis, and interdisciplinarity in some of her public-facing essays on the difficulties with defining Jewishness in the ancient world, the political ramifications of Christian imaginings of Jewishness, and “demons” as tools for social construction and critique.

Prof. Richard Newton will lead our in-house and informal virtual session where students will learn about Prof. Reed’s professional journey, her current research interests, and her view of the field. We are also excited to announce that a published version of her remarks will be published in a future issue of the Bulletin for the Study of Religion (whose editorial home is hosted by the Department).

The link to this Zoom session will be distributed to
students and friends of the department via email
shortly before the event.