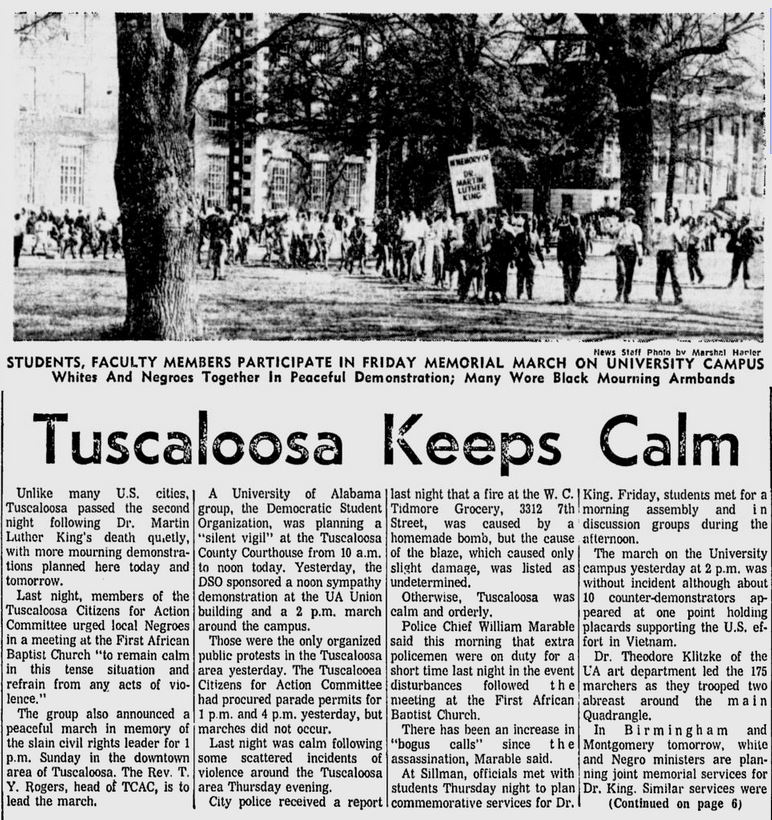 Dr. Joseph Bettis was the first Chair of UA’s Department of Religious Studies, and the following article was commissioned for and then published in our Spring 2005 issue of the Department newsletter; it is reposted here, in its original form, with his kind permission. (The above photo is from the front page of the Tuscaloosa News on April 6, 1968.)

I came to Tuscaloosa in 1964, one year after George Wallace had “stood in the schoolhouse door” to prevent Autherine Lucy’s registration at the University. At the time, I had no interest in civil rights or politics. I did not come to the University of Alabama in 1964 to join the civil rights movement. I came to teach religious studies and to participate in the creation of a Department of Religious Studies. I was fresh from graduate school, full of academic arrogance, ego, and enthusiasm.

At the time, Religious Studies courses were taught by various campus ministers and listed in the Philosophy Department. The quality of the courses was mixed. Leon Weinberger, who was a rabbi, and a Presbyterian Campus Minister, whose name I have forgotten, taught respectable courses with small enrollments. Other campus ministers taught courses that were notorious for being “an easy A” and they had very large enrollments. Iredell Jenkins was Chair of the Philosophy Department, and he knew that this was not a good situation.

They tried me out for a year and then decided to create a separate Religious Studies Department and asked me to Chair it. I was promoted to Associate Professor, and my annual salary was raised from $7,000 to $14,000. I was also given tenure, a decision that I suspect many administrators and faculty members later came to regret.

To inaugurate the Department we held a series of Lectures. Joseph Campbell, Franklin Littell, Stanley Hopper, and Will Herberg gave outstanding lectures. We were going to publish them but it didn’t happen. We did, however, make a department. I wrote a proposal to the Danforth Foundation and on the recommendation of their consultant, Prof. Van Harvey, they gave us a grant. I hired an old friend, Pat Green, and I also hired Leon Weinberger. The other campus ministers were invited not to teach any more. There was unhappiness about that. Oh well.

Three good teachers with solid credentials: we were on our way.

But it was impossible to remain in the Ivory Tower. Civil Rights were everywhere. The Selma March unfolded that year — March 21, 1965. I can still clearly remember standing in my kitchen and receiving a call from my grad school friends, Jim Sessions, Bruce Felker, and Don Jones, saying that they were at that moment in the Newark Airport, on their way to Selma. When I said I would meet them, they told me not to come. “We will leave Alabama after the march,” they said, “You will still be there.” I hung up the phone and cried. (I believe Jim still runs a poverty center in Knoxville and Don recently retired from a professorship at Drew University.)

The Presbyterian Campus Minister and Al Nelson, Professor of Sociology, got me involved. Al and I met in his home with Jo Malisham and Ross Bonner, local members of the Southern Christian Leadership Conference (SCLC). Al would close his blinds before the four of us met, and Ross and Jo came in through the back door. Tuscaloosa was the home of Bobby Shelton, Grand Wizard of the Ku Klux Klan. My real education was beginning.

Al was targeted for a time by the Klan, but after Jo Malisham parked his truck in front of Al’s house for a few days, the threat receded. I carried a gun, but I was afraid I would blow my own foot off, so I got a Doberman who went with me everywhere — even, for a time, to class.

While there may be those who do not want to remember those days — full of fear, anxiety, struggle — they need to be recorded. The administrators — Frank Rose, David Matthews, Alex Pow, Jeff Bennett — were useless. They resisted every advance and then took credit for the victories won by the nameless courageous. Bear Bryant could have made a huge difference, but he refused to recruit black players, even when given the opportunity to field potentially great athletes. Later, of course, when there was no risk, the Bear joined the parade.

For every vicious act of hate there was a victorious act of love, and for every coward who capitulated to the forces of racism there was a hero who stood up: T.Y. Rogers, later killed in Georgia in an automobile accident that may not have been an accident; Bill Herzfeld, now Bishop Herzfeld; Jo Malisham; Ross Bonner; Mrs. Green, from First African Baptist Church; Al Nelson; Jeff Buttram; Ray Fowler; and so many others.

I had not been in Tuscaloosa long before I heard the name of T.Y. Rogers. He was the local SCLC leader and minister of First African Baptist Church, where the congregation had been tear-gassed by the Tuscaloosa police a year or so earlier. I was warned repeatedly that T.Y. Rogers was a radical trouble-maker, a very bad dude to be avoided at all costs.

I expected a black hulk, breathing fire and smoke. But when I finally met T.Y., I found him to be a mild, even rather timid, though courageous Baptist minister. He was a graduate of Crozer Theological Seminary, a devoted husband and father, and a quiet, thoughtful, inspiring man. He, along with Bill Herzfeld, who is now a Lutheran Bishop, were the leaders of the civil rights movement in Tuscaloosa.

Dr. Martin Luther King was murdered on April 4, 1968. A memorial service was held a few days later at Tuscaloosa’s First African Baptist Church, as services were held at black churches throughout the South. In attendance were about 3000 black people and about three whites. The church holds about 300, so there was quite a mass of people outside. I tried to hide inside, behind a post. But as the black ministers entered, one (Rev. Godfrey) saw me: “Hey Rev. Bettis,” he said, “do you want to march with the ministers?” That was the last thing I wanted to do. But I did. And I am proud of it.

T.Y. preached an incredibly powerful sermon. Here is something of what he said: “I was on the balcony. And I held Martin’s head in my lap, and I felt Martin’s blood in my hands, and I knew that Martin was dead. But Martin is not dead. When we march today, Martin will march with us and will continue to lead us. I knelt on the balcony. And I held Martin, and I knew Martin was dead. But Martin is not dead. . . .” T.Y.’s cadences continued to echo in the church and outside as they gave voice to unspeakable grief. After the sermon, 3000 people marched down the main street of Tuscaloosa, from First African Baptist Church, past the office of Bobby Shelton and the Ku Klux Klan, to the courthouse. The march was led by six black ministers — and me. There is a picture somewhere in the archives of the Tuscaloosa newspaper.

Meanwhile, back at the Department, there were still three faculty members. I had been lobbying the administration for another position, but given my extracurricular activities — some of which were admirably shared by Pat and Leon — I was finding it difficult to get additional budget for office supplies, much less a new position.

But then Dean Fred Conner told all the department heads that the University could no longer avoid hiring a black faculty member. Fred said that he was holding a line open for the first department that could recruit a black prospect. I saw this as a way to build our Department. I asked T.Y. if he would accept an appointment. He said yes, so I told Dean Conner that I had a black prospect, with good credentials, who would take the appointment. He was very pleased and asked me who. When I told him, he just looked stunned – incredulous — and said, “No.” End of story. (Fred was a good man — he was just reflecting administration policy and position.)

So I asked Fred if I could have some recruiting funds. He said given the trouble I had caused, he could not give me any funds to recruit. I went to see my friend Ray Fowler, head of Psychology, whose department was large and had discretionary funds. We announced a series of lectures on “Psychology and Black Religion in the South” and invited several distinguished black academics to form an advisory board. I remember Jim Cheek and Hosea Williams. This group helped us recruit a black faculty member. Thus Dorsey Blake became the fourth member of the Department of Religious Studies, teaching with us from 1972-77, and the first black faculty member at the University of Alabama.

There was more. These were the days of the anti-Vietnam War protests. For ten days at one point during the anti-war demonstrations, I could not leave home for fear of being arrested by Alabama State Troopers or attacked by the Klan. I wasn’t sure which would be worse. Students chained themselves to the flagpole in front of the student center. It was rumored that the CIA burned the ROTC building in order to create a pretext for the National Guard to occupy the campus. Universities were closed across the country. The University of Alabama was kept open by a large contingent of heavily armed National Guard troops. It was not a happy time.

The government had decided that the draft would be selective depending on a student’s grades. Only students with low grades would be drafted. I didn’t think I wanted my grades used that way, so I told a class that I would give everyone an “A.” One of the most moving experiences of my life happened in class the next day. A student asked to speak. She said that a number of women in the class had talked. They were afraid that blanket A’s would not work and would get me in trouble. The women had all agreed that they would accept lower grades to make the record look legitimate. I still remember their courage and my tears of respect for them.

In 1968 I sat behind Autherine Lucy at her graduation. George Wallace’s stand in the schoolhouse door had failed. Another student, who majored in Sociology and Religious Studies, became the first black sheriff in Green County since Reconstruction. In this context of civil rights and war protests, the Department of Religious Studies began forty years ago with a commitment to academic excellence, religious toleration, and social justice. In those days we debated how these interests were to mesh. Whereas some academics then and now believe that academic objectivity requires a distancing from issues of social justice, the Department of Religious Studies was begun with a belief that academic rigor and social activism can and must inform each other in creative and vital ways. How else were we to understand then the intricate relations between white religion, black religion, civil rights, and the Vietnam War? And how else are we to understand today and really impact the unfolding events surrounding Christianity, Judaism, and Islam in the Middle East?

From what I can tell at a distance, the Department continues to thrive. I feel certain that the debate remains lively.