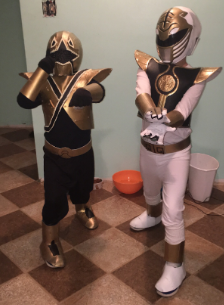 The time is Halloween 2018, and my nephews—ages nine and seven—are focused on one thing. They eat, sleep, and breathe Power Rangers. For them, these action heroes make the world go round. So naturally, at Halloween, the only costuming option as far as they are concerned is…you guessed it, Power Rangers. The only problem is that their love for the franchise is bigger than the amount of options available at stores. So, we set out to make their outfits from scratch. Several sheets of craft foam, plasti-dip, and spray paint cans later…here we are.

To some, these are just Halloween costumes, of course. But to these two kids, they work like ideology. They can come home from school, put on their costumes, and head outside to stop imagined villains. James H. Kavanagh describes ideology as the “science of ideas” or a “philosophy of mind.” For my nephews, the costumes allow them to perform in public ways their philosophy of mind, suiting up and saving the world, all before bedtime.

It can be easy to think about these performances as special occasions or as holiday exceptions. But we’re performing all the time…it’s just that often the costumes are so ordinary that they go unnoticed. James David Bonner is a good example of this. Mr. Bonner is something of a local celebrity in Tuscaloosa. You can find him in front of the Bojangle’s at their five-points location early in the morning and later in the evening, pretty much every day. He stands there day in and day out holding a sign that reads “Jesus Will Save You.” Just like my nephews, he performs his priorities, complete with costuming. 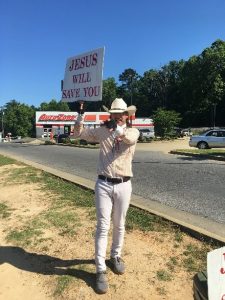 His performance has been developed and honed over the course of several years. The sign and the outfit showcase the way ideology and habitus work together. Habitus is the way that people see the world around them—the way they shape and are shaped by it. Craig Martin tells us that “one’s habitus is the result of socialization and is related to the fact that one develops habits linked to one’s social class.” I stopped and chatted a bit with Mr. Bonner to take this picture, and he was more than pleased to allow me to do so. We are invested in the ideological performances we give, and he offers a nice example of this devotion on full display.

No matter our standpoint, we are always performing. My nephews perform as Power Rangers, but they also perform as schoolchildren. Mr. Bonner’s performance might be called religious, but it is also political, social, and situational. We all wear masks to perform the task known as life. 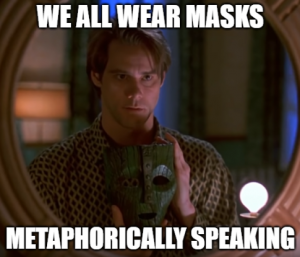 *Zach Gaff is a senior majoring in Electrical and Computer Engineering