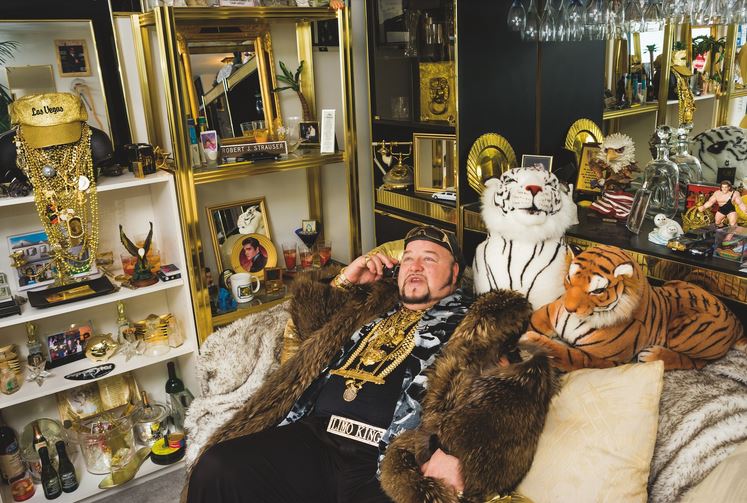 Ryland Hunstad, a student in Prof. Simmons’s REL 100 this past semester, is a sophomore from Denver, Colorado majoring in finance & management information systems, with interests in politics, philosophy, & religion.

In the following post he offers some further reflections on a group of people who were originally studied, in the mid-1950s, by the anthropologist, Horace Miner.

Since the last expedition to the land of the Nacirema, anthropologists have had several more opportunities to visit these people and observe their customs and social practices, in an attempt to decode the seemingly cryptic meaning behind their traditions and religious practices as it relates to their society. Those outsiders studying the Nacirema, by learning the language and acquainting themselves in general with the members of the Nacirema tribe, have begun to understand these customs in more depth, especially as they relate to the class system present among the Nacirema. Our hope in this piece is to relay their findings so that these social practices may be studied and analyzed in greater detail.

For the readers who have not been introduced yet to the peculiar case of the Nacirema, we must set the stage accordingly. The Nacirema are a North American group living in the territory between the Canadian Cree, the Yaqui, and Tarahumare of Mexico, and the Carib and Arawak of the Antilles. Nacirema culture is characterized by a highly developed market economy which has evolved in a rich natural habitat. Much of the people’s time is devoted to economic pursuits, as one’s status is directly correlated with the ability to show one’s economic success in the form of physical displays of prosperity. Several bizarre customs have evolved in direct relation to this preoccupation, which we will discuss below.

The first practice that perplexed anthropologists is the nature of the class system among the Nacirema. While the observance of class systems is prevalent across many different groups throughout history, the specific nature of the Nacirema class system is worthy of attention. The class system revolves completely around the economic success of an individual, with a direct correlation between an individual’s class and their wealth. The people who command the highest amount of admiration and influence among the Nacirema are those who have shown themselves to be successful in the art of accumulating wealth. In many other cultures with a class system, occupation is the primary determinant of one’s social class. For example, India’s class system favors priests above merchants and traders. Thus, it is peculiar to learn the Nacirema have a certain apathy to occupations. Their primary concern in respect to occupations seems to be the occupation’s ability to generate wealth; in most cases, it is of no great matter what specific occupation one finds oneself in, as long as it produces a maximum amount of wealth possible. The Nacirema display a religious focus on the accumulation and display of wealth; many aspects of tribal life are directed towards these efforts, as we will continue to discover below.

Wealth is shown primarily with the size of the tribal huts, as well as the location (large huts seem to be concentrated near one another, creating a segregation between those with large dwelling huts and those with small ones). Some members of the tribe have even been observed to possess two or more dwelling huts, although the reason for possessing multiple huts, beyond functioning as a further display of wealth, is yet to be discovered. Wealth is also displayed with the clothes and jewelry one wears. Clothes are not made by the individual family units, as is the custom among many other tribal groups; rather, clothes are made by specially designated individuals in the community. Further, certain clothes and jewelry-makers are deemed arbitrarily better than other clothe-makers. The clothe-makers designated as top-tier are thus able to demand more wealth in return for their product. Wearing clothes produced by these clothe-makers is another way of displaying wealth, most likely due to the significant amount of wealth one must sacrifice to obtain them.

It is peculiar to find, considering the Nacirema’s obsessive preoccupation with showing wealth, that it is considered taboo and unacceptable to discuss specifics of one’s economic and financial situation. Being extremely visible in showing their wealth, anthropologists were puzzled to find that discussing the specifics of one’s wealth was considered taboo in day-to-day life. This bizarre relationship must be studied more before it is fully understood.

Another interesting aspect relating to the class system is the disdain by members of the upper class for those who inhabit the lower classes. While the higher-class among the Nacirema claim they have no contempt for those in the lower class, there is evidence to the contrary. Quite frequently, they make claims of helping those in the lower class by philanthropically redistributing the wealth they have acquired to those with less wealth, ostensibly as a type of aid to those living in the lower class. Evidence is yet to be found that supports these claims. In fact, anthropologists found that many of the actions taken by those in the upper class (including the tribal leaders and chiefs, who are often included in the upper class) actually serve to perpetuate the inequality found between the classes. While rigid class systems without upward mobility are common, it is unusual to see the duplicity of those upper-class individuals who claim to help but whose actions tell a different story.

Continuing on the topic of the class system among the Nacirema, there is a persistent narrative of class mobility that is repeated, often among those in the lower class. This narrative of class mobility is another manifestation of the Nacirema’s religion of wealth. It dictates that it is possible and even common for lower-class members of the tribe to ascend to the higher classes; further, it perpetuates the belief that the highest levels of personal gratification and contentment correlate with the one’s wealth. This myth is extremely prevalent, despite there being a statistically insignificant number of success stories wherein members were able to ascend the class ladder. Anthropologists also doubt claims that those with more wealth attain higher levels of personal satisfaction than those with less wealth. Whether due to the oppressive approach by leaders to maintain the rigid class system or due to other factors, researchers were unable to find statistical basis for belief in this pervasive myth. It does, in effect, create an inflexible class system, despite the common perception among the Nacirema that the class system is very flexible and yielding to upward mobility.

These observations about the Nacirema’s religious-like obsession with wealth and success is unusual both in the way these obsessions are expressed and the prevalence of the different narratives surrounding this culture of wealth. While the extended observation of the Nacirema has helped in the study of their social, cultural and religious practices, much more observation is needed before we may fully understand the deep and complex traditions and customs of the Nacirema. We hope next to explore the political practices among the tribe, as both political and governmental structure is an important factor in understanding any anthropological group.

The opening photo, taken from here, is of “Limo Bob,” who builds, sells, and rents limousines in Chicago; he regularly wears 33 pounds of gold jewelry.