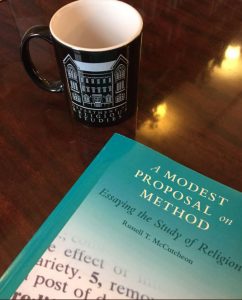 @AnnetteYReed had a great idea & I’m copying it. My 2016 @Brill_Religious book just came out in paperback–reply here with a quote about religion & matching gif and the one with the most likes on Mar 15 gets my hot-off-the-press author’s copy & Dept mug.https://t.co/GQotxUUAgy

When the dust had settled, 1st place went to Kristian Peterson:

“What other name can we give to the burst of emotion in which men find themselves when, as the result of a collective effervescence, they believe they have been swept up into a world quite different from the one they see?”
Émile Durkheim, The Elementary Forms of Religious Life pic.twitter.com/AhoU1avu5c

“Religion is the sigh of the oppressed creature, the heart of a heartless world, and the soul of soulless conditions. It is the opium of the people.” pic.twitter.com/zCe0nrSNCT

Daniel got the book.

But, of course, the competition was stiff. So buckle up — there’s a bunch of them (in no particular order)…

“Are we still in the game …?” pic.twitter.com/ztL9le8dxy

“The abstract category ‘religion’ most certainly allows the scholar to search for, arrange & compare a preselected set of cultural characteristics, but it is in the way that the picture on the cover of a jigsaw puzzle…predetermines what one will look for” – C.Barton & D.Boyarin pic.twitter.com/OCvy2FjRir

“Religion is notoriously resistant to attempts to REDUCE it to consistency.” -John J. Collins (Between Athens and Jerusalem, p26) pic.twitter.com/WIXyf765gM

“There is nothing as apt to obscure the face of God as religion.” – Martin Buber, “A Believing Humanism” [submitted on behalf of the twitterless Shaul Magid] pic.twitter.com/HWaaELbnRY

“If you don’t know the difference between theology and religious
studies, then you’re a theologian.”-Brian Bocking pic.twitter.com/EEmeg72U1I

“The modern discourse of religion is most keenly appreciated in its invisibility.”
– Robert J. Baird pic.twitter.com/myJf75H1MP

“Many laymen envy the vocation of the historian of religions. What nobler or more rewarding occupation could there be…?” M. Eliade, Images and Symbols (Search Book Edition, 1969), 27 pic.twitter.com/mKqsbwZ0x6

“Since [around the Renaissance], definitions of & controversies about [race & religion] have proliferated. But in everyday discourse, they have clear & uncontested meanings…People know what the terms “religion” & “race” mean, even as scholars debate them endlessly.” Paul Harvey pic.twitter.com/CqfecyuqUG

“Atheists are as inconsistent and unpredictable as believers” — Benedict Groeschel, C.F.R. (paraphrased from a lecture) pic.twitter.com/h0nEfrsEfl

“Religion is like a pair of shoes. Find one that fits for you, but don’t make me wear your shoes.” – George Carlin pic.twitter.com/prnr0k0tLg

“We are tied to God and bound to Him by the bond of piety, and it is from this, and not, as Cicero holds, from careful consideration, that religion has received its name.”
-Lactantius, “Divine Institutes”, IV, xxviii. pic.twitter.com/AVfTBy0gwW

“[W]hen one encounters the word ‘religion’ in a translation of an ancient text: First, cross out the word whenever it occurs . . .” (Nongbri, *Before Religion* p. 156, citing Edwin Judge) pic.twitter.com/Dzvk4XUqJD

“The invention thesis… that… Hinduism and Buddhism… but also the term religion itself are invented, that these are modern, that they are Western, emerging out of a colonial encounter, and outsiders’ terms…. I think all of those things are false.”
– Will Sweetman pic.twitter.com/QJaqTg55Mu

“Conservation of the monopoly over symbolic power, such as religious authority, depends on the ability of the institution that possesses it to make known to those who are excluded from it the legitimacy of their exclusion…” – Bourdieu pic.twitter.com/ti6MowChYR

“Religion is a cultural phenomenon that is clothed in native language in texts, rituals, and doctrines difficult to translate with precision into another language.”-Leela Prasad pic.twitter.com/Od6FeteTFc

“i found god in myself/ & i loved her/ i loved her fiercely” —@NtozakeShange1 pic.twitter.com/XziVJwZVTc

“every religion and every cult which sets up a God.. is the worship of images and consequently idolatry” – Karl Barth pic.twitter.com/U0k2A3Irsf

[so much fun!] “…the normative conception
of religion as belief facilitates other claims about what counts as evidence,
materiality, and real versus psychic or imagined harm” (Mahmood, 2009, 853) pic.twitter.com/8tZ3oiVKqG

“Religious texts are human products. Like all that is human, they are capable of high moral purpose AND crass self-promotion, spiritual longing AND material interest.” —Lincoln, “How to Read a Religious Text.” pic.twitter.com/jZmjrf410u

“Gods, like dogs, will only answer to their names.” RM Ogilvie pic.twitter.com/Pqaa7zzNWF

“Religion is the state of being grasped by an ultimate concern, a concern which qualifies all other concerns as preliminary and which itself contains the answer to the question of the meaning of life.” -Paul Tillich pic.twitter.com/Ggv43wEBRZ

“Magic is the perversion of science as well as of religion.” ~Alexander Le Roy, 1922 pic.twitter.com/dwaU5fOH68

“A religion is unified system of beliefs & practices relative to sacred things, that is to say, things set apart and forbidden—beliefs & practices which unite into one single moral community … all those who adhere to them.” Emile Durkheim pic.twitter.com/pCbraz1o6d

“it is not easy to discuss questions of
religious psychology with one who can recollect the emotions
of his adolescence, the discomforts of indigestion, or, say, social
feelings, but cannot recall any intrinsically religious feelings.”

-Rudolf Otto, The Idea of the Holy pic.twitter.com/p2iClBjUKB

“Religion is anything that sufficiently resembles modern Protestant Christianity.” Nongbri, Before Religion, 18. pic.twitter.com/Rc1UxEllHV

Guy Debord, “The spectacle is the material reconstruction of the religious illusion. Spectacular technology has not dispelled the religious clouds where men had placed their own powers detached from themselves; it has only tied them to an earthly base.“ _society of the spectacle_ pic.twitter.com/ZGmrKvcdsS

“Map is not territory.” pic.twitter.com/THPWfTbmOB

“The essence of religion consists in the feeling of absolute dependence.” #schleiermacher pic.twitter.com/ZIsJoM5uMG

“Hisbodedus, personal prayer before God, is greater than anything else. That is, a person should set aside at least an hour or more everyday to seclude himself from others and speak to God in his own language.”
-Rabbi Nachman of Breslov, Likutey Moharan I pic.twitter.com/nDEhV2ygoM

For the student of religion such as myself to willingly accept the designation of “historian of religion” is to submit to a lifelong sentence of ambiguity. – J. Z. Smith pic.twitter.com/JRKBJ5bL27

[religion is] the feelings, acts, and experiences of individual men in their solitude, so far as they apprehend themselves to stand in relation to whatever they may consider the divine.” – William James, Varieties of religious experience. pic.twitter.com/AUpiRGwOl3

“All that is solid melts into air, all that is holy is profaned, and man is at last compelled to face with sober senses his real conditions of life, and his relations with his kind.” -Karl Marx and Friedrich Engels pic.twitter.com/yDx55LAhCa

One more. I can’t help myself.

“The god, it would appear, was frequently thought of as the physical progenitor or first father of his people.” -Robertson Smith pic.twitter.com/b9heIhiCbf

“Religion … is the opium of the people.” pic.twitter.com/GLBbk29KCD

“The task of philosophy today could well be, What are these relations of power in which we are caught and in which philosophy itself… has been entangled?”
—Michel Foucault, “La Philsophie analytique de la politique” (1978), Dits et écrits, 1954-1988 pic.twitter.com/J9z3oMJPgt

“‘Religion’ and the assumption that the world is neatly divided between religious and nonreligious spheres…can be understood as a product of historical development and not a brute fact of social life.” –@McCutcheonSays, Studying Religion: An Introduction pic.twitter.com/CvQzhcbQaK

One of my favorites: “Religion is solely the creation of the scholar’s study. It is created for the scholar’s analytic purposes by his imaginative acts of comparison and generalization. Religion has no existence apart from the academy.” —J.Z. Smith, Imagining Religion (1982) pic.twitter.com/KMy3ej8A20

“Religion is like a box of chocolates. You never know what you’re going to get” #ForrestGump pic.twitter.com/bx2GYO8NkN

“Because [the religions I study are] funny. They’re interesting in and of themselves. They relate to the world in which I live, but it’s like a fun house mirror: Something’s off. It’s not quite the world I live in, yet it’s recognizable.” — JZ Smith, interview w/ Chicago Maroon pic.twitter.com/cGMUp8Ctx4

“Tell a person that you’re the Metatron and they stare at you blankly. Mention something out of a Charlton Heston movie and suddenly everybody is a theology scholar.” pic.twitter.com/RN5rmnw55O

“In fact, if I went back to college to day, I think I would probably major in comparative religion because that’s how integrated [religion] is in everything that are working on and deciding and thinking about in life today.” -John Kerry. Every reli program like ??? pic.twitter.com/qWxbHYBrBt

The truth of Voltaire’s statement regarding what one believes about the divine— “If God has made us in his image, we have returned him the favor”— is validated more by how we play #TheSims than the work of even the greatest scholars. pic.twitter.com/aZBr0JL1Ik

“Religion is one of the more effective media by which social power is realized in bodies” from Robert Orsi, “Is the Study of Lived Religion Irrelevant for the World We Live in?” p. 172. pic.twitter.com/nhq6MRpgyk

“The very existence of some thing called ‘religion’ is largely an illusion.”

Pascal Boyer, The Fracture of an Illusion, 9 pic.twitter.com/gTyPKLrbcL

“Sooner or later, the day comes when the king is driven to brandish his critic’s shit as evidence that the man was a demon, the king himself presumably being shitless and divine.”
– Bruce Lincoln pic.twitter.com/vFuAwpP809

“God is dead. God remains dead. And we have killed him.”

“Scholarly labor is a disciplined exaggeration in the direction of knowledge.”-J.Z. Smith, “A Matter of Class” in *Relating Religion* pic.twitter.com/cj2Zc344kl

The quest for the origin of religion “did not only result in discrediting itself…but gnawed at and steadily ate away the very backbone of our easy sense of history and time” – Masuzawa, In Search of Dreamtime (1993), 178. pic.twitter.com/B7cFkdXk9U

Oh, and Kristian and Annette for a mug.

Thanks to the REL main office for getting these all into one post!