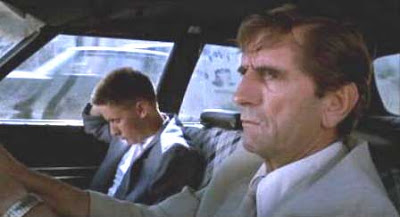 Andrew Smith is a Political Science, Criminal Justice, and Religious Studies major from Madison, AL, and is known for his exceptional kindness, intelligence, dashing good looks, and incredible humility. The following blog post was written for REL 360: Popular Culture/Humanities.

The film Repo Man – the second of the REL 360 films this semester – was absurd, ludicrous, and irreverent – or was it? Upon first viewing, this may be the understanding of the film’s message. Repo Man, a movie following a young man entering the repossession business and a car with the ability to disintegrate people, shows off a cast of strange and irrational characters, all of whom quite readily accept the presence of bizarre and impossible happenings. Perhaps, then, the ability to accept such irrationality is a function of bizarre behavior, and by extension religious thinking is absurd. Yet, on the other hand, religious themes pervade the movie that may not be so ironic. After one character is found to have left a hospital despite grievous wounds, another character comments, “He is risen!” Solemn regard is given to the “Repo Man Code”, and the hypocrisy of characters appears in abundant clarity. In a sense, what is under scrutiny is not religious belief, but the idiosyncratic religious beliefs of the modern era. So, which is it? Is this film one of reverence, or not?

Arguably, both views are valid. The interesting question is not so much whether or not the film is respectful to religion, but why the question is valid at all. How is an absurdist film about an alien car potentially reverent, and what does this show about how people see reverence?

Perhaps it would be prudent to begin with a more common scenario. How does one show reverence in a religious institution they are not a part of? Generally, adherence to ritual is most appropriate. So, if a non-Catholic goes to Mass, they may still get a dab of holy water so as not to offend anyone or cause a scene. If one does not follow those rituals, they might not be irreverent, but they may not be reverent either.

Media, on the other hand, has different standards for displaying reverence. Since a movie is judged on what it displays, the matter of reverence relies on the characters who practice the religion. If a movie shows the antagonists as Muslim extremists battling Protestant American soldiers, a subtext of irreverence against Islam may be built, while one of reverence towards Christianity may be suggested. On a more broad scale, if an atheistic villain is shown committing atrocities towards a hero of any religion, an irreverence against atheism may be the motion of the work. Following this trend, it would follow that Repo Man and its zany cast may be disparaging religion as a concept – but something still fails to fit.

Most movies reflecting the characterization-religion connection specifically look to organized religion. Repo Man, with the exception of one jab at televangelists and one at Scientology, fails to comment on organized religion at all. For all the religious commentary one may find in the film, any concerning religion as an institution is seemingly nonexistent. So, in a film where the most immediate way to find reverence (or a lack thereof) is taken, what do we look to for signals?

The most immediate tool after characterization for a movie to show reverence then seems to be tone. For example, in the rom-com My Big Fat Greek Wedding, a shift to a more serious tone can be seen in scenes where religion plays a central role, acting as a nod to the audience that the film would remain respectful to the sacred. Yet in Repo Man, this reliance on tone serves as both a boon and a bane for reverence, for there is never much of a tonal shift and thus no cue as to when reverence may begin or end.

At the end of the day, there may be no message at all, and this may be the most revealing of scenarios. In today’s media, viewers expect a stance on religion if its alluded to, and when one is not particularly clear, we will attempt to seek one out. Whether it is reverence or irreverence we would like to see, we nonetheless demand one or the other from our media, and as a result other commentary – for example, that on individualized theological beliefs, or how people interact with ethical codes – is prone to being glazed over. Repo Man serves as a reminder that such a stance may not be required, and even if that stance is there, it may take more looking than we first may think.