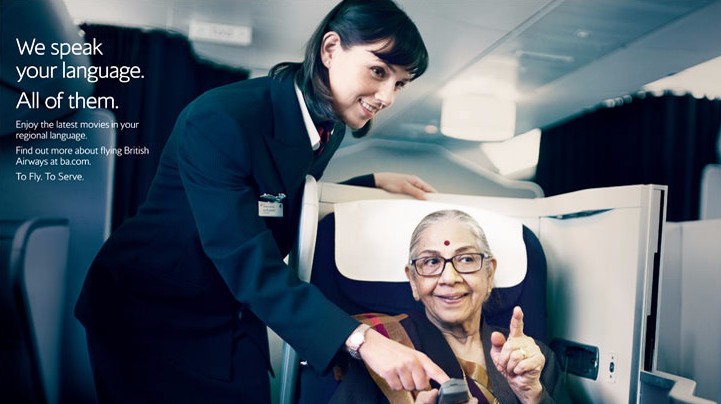 Violence? Where? A young British flight attendant has an extraordinarily heartwarming experience with one of the Indian passengers on her flight, and she comes away with a “feeling she cannot describe” for India. The violence is there, but it is something more subtle than the typical expectation of violence. It is what Gyanendra Pandey calls in his book by the same name “routine violence.” Routine violence occurs through the representation of minorities, the writing of history, the demarcation of religious and political categories, and other “routine” ways which creates facets of national identity. These techniques make invisible the ways in which select members of the population are subjected to exclusion, discrimination, and othering. So in this sense, what in this ad might be called violent?

The ad ends with the slogan “Loving India back since 1924.” This phrase is a particular conception of history that shapes the whole narrative of the ad. It was not until 1947 that India became an independent nation within the British Commonwealth, meaning that this slogan misleads its audience about the duration of the Republic of India’s political autonomy. By implying that India was the same autonomous political state in 1924 as it is today, British Airways erases the fact that India was under the rule of the British Crown at that time. The slogan creates an ahistorical representation of British/Indian relations even as it appears to make a historical statement. But the trickier component of this slogan is in its presumption of the nature of this relationship. The slogan implies that India has loved Britain since 1924, creating a monolithic and impossible sense that the population of India has an innate goodwill towards the British nation. This sense of love from the Indian citizen to the British one pervades the entire ad (note the title).

Throughout the ad, a certain kind of Indian citizen is being constructed for a (presumably) British viewer. The lead flight attendant is heard saying, “What is often served on this route would be a vegetarian alternative.” A viewer with a limited knowledge of certain Hindu practices is likely to associate Hinduism with vegetarianism. Vegetarian, Hindu, and Indian are then all conflated into a single subject, where in fact these first two identities may exist independent of the third national category. So when the viewer meets the (unnamed) woman on the flight, there is an immediate assumption that she identifies with all of these. The high likelihood that this assumption is correct reinforces the viewer’s notion that their monolithic conception of Indian citizens is accurate. All of these characteristics of this Indian woman create expectations in a British viewer that this is how Indian citizens on their trip to India will react to them, and this is the violence with which Pandey is concerned.

The ad’s characterization of the Indian woman ultimately reconfigures the conception of the colonial subject. After the woman invites Helena to her house, Helena remarks that “there was something in her smile, you know–that childlike persuasion. I actually felt myself going.” Helena simultaneously infantilizes and romanticizes the Indian woman, just as the British did in their representation of Indians under colonial rule. Such a representation implicitly, and often explicitly, justifies treatment of the subject as lesser. Even the way Helena helps the woman and comforts her seems to be undergirded by a patronizing tone. “I really do understand…” There is also a sense that Helena is pulled by something exotic and mysterious in the woman. She is treated to the family’s food and entertained as a welcome outsider, which quietly reinforces the British viewer’s idea that the Indian citizens they will encounter are obligated to provide them with these experiences.

But this ad doesn’t only create a particular view of India from the vantage of a British audience; it also reflects the national identity that the party of the Hindu Right uses to mobilize anti-Muslim rhetoric, which Pandey discusses in his book. It becomes clear from Pandey’s scholarship that this nationalistic conception of Hindu Indian identity is reflective of the British colonial influence. The divisions the British fostered between groups they identified as Muslims and Hindus remain part of the rhetoric within Indian political discourse, and such rhetoric is often used by the Hindu Right to reinforce their nationalist narrative. The characteristics of the category of “Indian” in the view of the Hindu Right are traceable to those the British assigned the category, as British Airways does in its ad.

The effects of the routine violence in this ad are, of course, not part of its narrative. But the way in which it creates a history and a particular Indian subject to be a part of this history erases the fact of colonialism and allows that violence to be reproduced.

2 thoughts on “Loving India Back? Routine Violence and Rewriting History in a British Airways Ad”