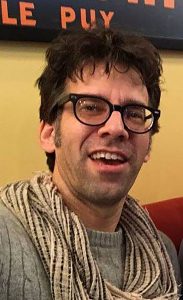 I’m from Alabama, now! Let’s have a story, too. I’ve had two stints living in the middle of nowhere Canada (just a few hundred miles north of the middle of nowhere, Montana): once on a farm near Vanscoy with my parents and off-the-grid as a young adult. Friends came to my place on New Year’s Eve 1999, because we could survive the zombie apocalypse there if the millennium bug did trigger the downfall of the world as we know it.

My time at the University of Winnipeg started in anthropology and ended with religious studies. There were several religious studies professors at U of W that made an impression on me. I had something of a crisis in the first semester when I threw myself into a course on Islam and earned C+. But that same term I had a course with the late Dr. Carl Ridd, “the Crisis of Modernity.” The course was quite literally a critical introduction to the political theory of individualism. Our inquiry – Dr. Ridd galvanized the entire class into the first person plural – into “religion” was a journey across literature, economics, politics and social theory. Before the end of the term I had switched to a religious studies major. (The anthropology courses were amazing, too!)

I was explicitly warned by my Sunday School teacher not to study religion or theology. The same teacher showed us a video about how Satan communicates through heavy metal. In general, it seems ill-advised to bluntly tell a teenager not to do something without a really good explanation. To say the least, I left Saskatchewan in a raunchy 1968 Camaro, wearing ripped jeans and a black t-shirt, planning to take some university classes on religion. I soon sold the Camaro but kept up the other proclivities (driving a big-block on a college budget hurts, even when gas is 30 cents a gallon…).

Here is my contribution to the “first seven jobs” meme: tree farming, kids camping, mail delivering, recycling sorting, church ministering, residential and commercial electrical-ing, outdoor adventure camping and a salting of metal bassist playing throughout it all. There must be something interesting in there…

“It happened” while I was studying part-time in the evenings and working daytimes as an electrician. There was a seminar on theories of embodiment with the late Dr. Marta Frascati at the University of Saskatchewan. Our readings were difficult, amazing and completely new to me. Dr. Frascati walked us through these thinkers, such as Cixous, Foucault, Vattimo, Merleau-Ponty, Irigaray and Derrida. Two factors were instrumental: Firstly, note the first person plural in the previous sentence. Outside class time, Marta cultivated community with art films, amazing Italian wines and vibrant discussions at her home. It was like attending the salons I read about in my women’s studies courses at U of W. Secondly, Marta herself broached the issue of my further studies. Did I want to continue my career in construction or attempt a PhD?

The current project is to publish a manuscript on my reading of Jacques Derrida’s work relative to the topic of “evil” among philosophers of religion. After last summer’s trip to the Derrida archives at U.C. Irvine and the biennial “Derrida Today” conference, I have the basis of an article that will propose a revisiting of the claim that Derrida had a ‘turn to religion’ in his later works. Firstly, my reading of Derrida rejects biographical claims about an author’s intentions. And secondly, I think a compelling alternative framework better situates some of his work relative to persistent issues in modern European thought on “religion.”

Despite a recent bout with pneumonia, I absolutely cannot wait to ride the amazing trails of Alabama. My good friend SID has been wondering where I went… 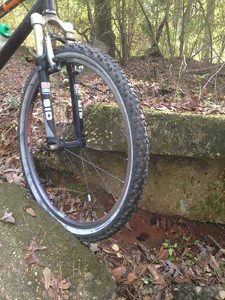 SID, pictured above, traversing one of Alabama’s many trails.

Want to learn more about Prof. Loewen? Check out his past ar·ti·facts videos here and here. Also be sure to watch his first interview with the REL film crew.