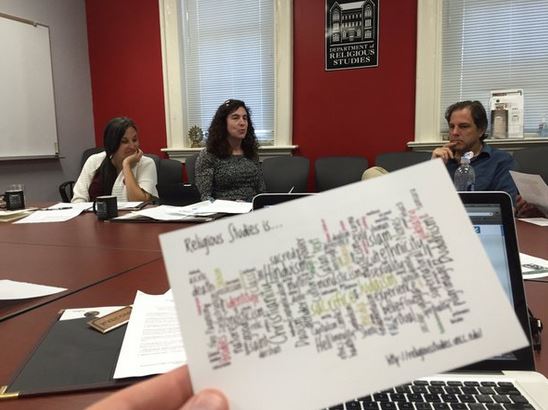 Dr. Kevin Schilbrack (pictured above, right) is a professor of Religious Studies and chair of the Department of Philosophy and Religion at Appalachian State University. He was recently at the University of Alabama for the inaugural workshop for public university Religious Studies department chairs and offers the following report.

Like many other department chairs, I suspect, I became chair after years of teaching, writing, and generally being collegial – but I received little or no training on how to be a chair.   And the work as chair of a department of Religious Studies in a public university comes with its own particular set of issues.  What does the study of religions include when it is in a state-supported setting?  Where can we profitably collaborate with other disciplines?  And perhaps, above all, how can we recruit new students to the academic study of religions? To create a forum where department chairs could meet and work on questions like these, we came together for what we hope is the first annual workshop for chairs of departments of Religious Studies.

Hosted this year by Russell McCutcheon and the folks at the University of Alabama, the one-day conference included a variety of kinds of religious studies programs: we had departments that had just begun their B.A.s and some that had existed for decades. Some had just the B.A., but some had terminal masters programs, and some had doctoral programs.

We wanted to focus in this first meeting on practices that worked. Randy Styers, the department chair from UNC Chapel Hill, discussed how students get into doctoral programs.  Russell McCutcheon gave a presentation on diverse kinds and uses of social media and spoke about the value of bringing alumni back to campus to represent the program. Rebekka King discussed how she and her colleagues created a new Religious Studies major on their campus (Middle Tennessee State).  Kevin Schilbrack listed eight strategies his faculty has used to dramatically raise their number of majors.  Joanne Robinson, from UNC Charlotte, talked us through how her department hosts student conferences and an online journal.  Alexander Henn, from Arizona State, discussed the value of having multiple concentrations in a B.A. program and their cooperation with ASU’s Center for the Study of Religion and Conflict.  And Ted Trost talked about being intentional about the number of hours in a Religion major (which can be low) and a Religion minor (which can be high).

This group is creating one of those academic venues that is focused and productive.  It provides an opportunity for those of us wanting to cultivate excellence as chairs to ask questions and hear answers that one might not be able to find anywhere else. Because Charlotte is so easy to get to by air, we hope to meet next year there (and to have more attendees able to join us).

The meeting was live tweeted — visit here for a summary.