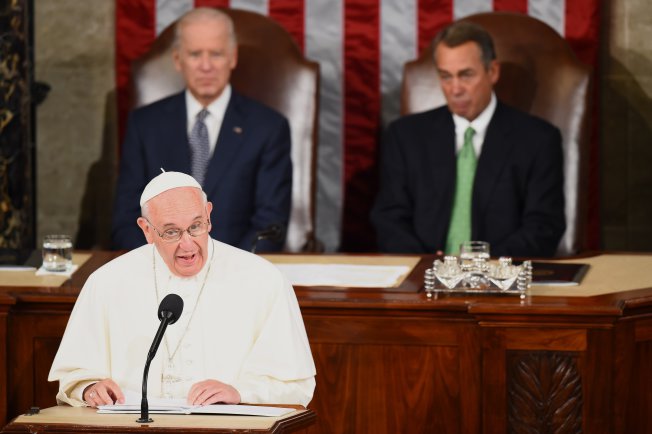 Katie Brinser is from Lindenhurst, IL.  She is a senior majoring in International Studies and Finance with a minor in Arabic Language and Culture.  This post was originally written for Eleanor Finnegan‘s REL 370 class

In September, Pope Francis visited the United States and became the first pope to address the US Congress. In his address, Pope Francis emphasized the importance of social responsibility and political activity. He called on the American people to “serve and promote the good of the human person and be based on respect for his or her dignity”, and used the Declaration of Independence to justify why the American people must act in this manner. Pope Francis did not speak only as a religious figure, but as a political activist addressing current issues such as the immigration crisis, death penalty, youth violence, and ongoing conflicts throughout the world. He spoke about the rich heritage of America and how this heritage is a call to action to help with the world’s problems.

Jose Casanova, as summarized in Talal Asad’s Formation of the Secular, argues that in order for a nation-state to be modern religion must be separate from politics and should not play a significant role in social issues. While, no one disagrees that the United States is a modern nation, it is also clear that religion plays a role in politics.

Religion not only exists in the political sphere, but is welcomed, as the invitation for Pope Francis to speak to congress demonstrates. Talal Asad proposes that secularism is not the deprivation of religion, but secularism privileges certain religions that are seen as compatible with modernity. It is becoming increasingly difficult, to separate politics and religion from the personal sphere. In fact, Asad even argues that the concept of secularism has produced its own imagined community. For the modernization of the secular life cannot occur without the changing of the religious sphere. Secularism’s history uses a religious context to free itself from the world and create a sphere where human responsibility is seen as the answer to all events. Secularism is set in its own domain where the public and private spheres have created demarcated spaces in which religion and politics can exist. These spheres in reality, however, are constantly intertwined as observed with the Pope addressing Congress.

Pope Francis’s invitation to speak demonstrates the privilege certain religions have in the secular nation-state of America. Pope Francis’s speech is filled with references towards God, Christianity, and the ways in which it can enact political change. While there are no questions about the modernity of America, the same is not usually said for Middle Eastern countries that also have a predominant religion. These countries, where the religious and political spheres are intertwined, are condemned for being non-secular and labeled as backwards because of their inability to progress towards modern times. In the same breath, many Americans greeted Pope Francis with praise and excitement while they condemned non-Western or by extension non-Christian nations for having their faith interfere with politics.

That is not to say that Pope Francis’s arrival should be condemned as well or that he has no right addressing congress due to secularism, but this event contextualizes the way Americans react to Christianity in politics as compared to other faiths. America’s own history demonstrates the influence religion has in the secularization or freeing of a nation sate. Muqtedar Khan’s “American Exceptionalism and American Muslims” explains that American exceptionalism is the idea that America is a unique nation, blessed by God. This exceptionalism leads to hypocrisy, because the U.S. welcomes the Head of the Catholic Church to speak to our legislators because he is decisively Christian, while also being fearful of Islam infiltrating our politics. It also highlights the issue in which Pope Francis specifically calls on Americans to help with concerns that are not necessarily their own. There is a savior and interventionist mentality prevalent throughout the Pope’s speech that speaks to America’s sense of exceptionalism and its expansive empire, whether real or imagined. There is this mentality in the West, specifically in American society that it is modern and secular and is therefore immune to overzealous faith in politics, while the East and Eastern religions cannot exercise the same restraint.

Indeed, Pope Francis’s remarks called for a deepened sense of compassion and understanding throughout the world. His speech touched upon many current crises around the world and how action is needed. Nevertheless, his speech while well intentioned serves to highlight the way in which Americans view religion and politics.