The American Academy of Religion recently held a consultation with its membership about “Responsible Research Practices: A Statement on Standards of Professional Conduct for AAR Members.” A grand total of four scholars responded to the statement on the AAR’s website. A online quick search for responses elsewhere returned nothing, other than a series of posts by Russell McCutcheon. Unless members of this scholarly association are just waiting for the session at the AAR’s annual meeting where further discussion will be held, the response to the Statement seems to be mostly crickets.

I was going to write a post about Statement’s lack of reference to the extant policies and bodies that govern most research in higher education, but there is a footnote that gives a nod to the fact that ” The labels and procedures vary across national borders and among educational institutions, but there is much agreement about the guiding principles.” Thus, for basic knowledge of what governs our research as members of the higher education research community, the AAR’s membership does not require this Statement. Those of us who work at publicly-funded institutions are very strictly held to these policies.

Thinking about funding led me to another item that did catch my eye. The preamble says that the Statement is to inform religious studies research “from funding to publication.” There is nothing in the Statement to guide professional conduct with regard to funding.

There is a folk adage that says “money never comes without strings.” Should the Statement say something about funding?

The first bullet point in the statement lays out the principle that, “To honor the highest ideals of intellectual inquiry and the institutional contexts that support them, researchers should defend academic freedom.” How does academic freedom relate to funding?

Were the Statement to pull on the strings that fund your research, would it come unravelled?

As a self-funded graduate student, I never worried about declaring who funded my dissertation research. As a scholar at a publicly-funded institution, I am now beholden to take ethics compliance courses and to declare all my funding sources in order to be cleared of any conflicts of interest. My obligations as a researcher to disclose my interests in this regard extend beyond whether I ask students to buy my books or if I obtain technology that just so happens to see personal use every now and then. Were my child or father to obtain any benefit from my research, I would need to declare it. 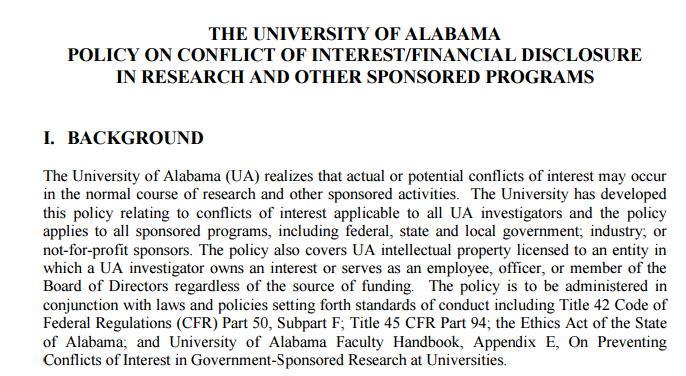 A lot, and I mean A LOT, of research in our field seems to be funded by a wide variety of individuals, groups and organizations with various – explicit and tacit – interests. Some of these just might be up for scrutiny in the interest of whatever may be the “highest ideals” of academic inquiry or in defense of “academic freedom.”

For example, why does the Statement not say anything relevant about the possibility of research funded by what it elsewhere calls “communities of belief and practice”? U.C. Irvine just announced three endowed new chairs in Hindu, Sikh and Jain studies. At past AAR annual meetings I have been approached by members of the Hindu American Foundation to fund my research. The HAF is not an outlier or an innovator. Rather, the precedent is that funding for religious studies research is often tied to groups with specific interests.

The Lily Foundation, is but one example:

“Our primary aim in this field is to deepen and enrich the religious lives of American Christians, principally by funding efforts to encourage, support and educate a new generation of talented pastors and to strengthen current pastors in their capacities for excellence in ministry…We support theological schools and other educational and religious institutions that share these aims.”

So this leads me to ask: who is pulling your strings?

3 thoughts on “Should We Pull at Our (Funding) Strings?”