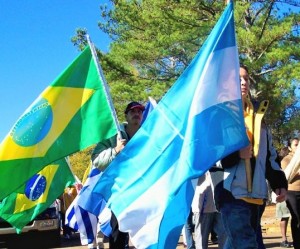 By Mary Rebecca Read-Wahidi
Becky is a PhD Candidate in the Department of Anthropology and will graduate just as soon as she finishes writing her dissertation on the Virgin of Guadalupe. She joined the Department of Religious Studies as a Graduate Teaching Assistant in the Fall of 2012, and was immediately enamored by the charming atmosphere, lofty office space, and pencils with “religion in culture” printed on them.

One thing I have gained from my experience as a GTA in Religious Studies is a more sharply-honed critical eye for labels, categories, and the act of “naming”. Now, as I write the final chapters of my dissertation, I find myself revisiting categories of “immigration”.
Back when I was writing my master’s thesis, I wrestled with the difference between migrants and immigrants. How should I refer to those people central to my study who are of Hispanic origin and are residing in Mississippi and working in the poultry industry? My understanding is that migrants are specifically driven by work, tend to be mobile, and don’t plant their roots, while immigrants come with the intent to stay and establish a new life. Sounds simple enough, but both of these scenarios exist in my research community to varying degrees. In the end, I settled on what seemed like the politically-correct compromise of “im/migrant”, an awkward term that I do not care to use for my dissertation.

More recently, to further complicate things, I began to consider how the term “ex-pat” fits into the equation. What is the difference between an expatriate and an immigrant? Why do I refer to members of my research community as immigrants, yet the Americans working and living abroad are called expatriates? Could it be as simple as country of origin? The only difference I can perceive is that an ex-pat is from a relatively wealthy, politically stable country, and chooses to work and live abroad, whereas the immigrant is from an unstable, struggling nation and has no choice but to live abroad.

A while back, there was actually an article on NPR that posed this same question. When I ran across it, I was eager to read it in hopes of gaining some clarity. In the article, Linton Weeks considers the point at which an American stops being an ex-pat and becomes an immigrant. As a step towards clarity, he begins by laying out the distinction between an immigrant and a migrant by referring to the U.N. definition of migrant and immigrant, where a migrant is “any person who changes his or her country of usual residence,” and an immigrant as, “someone who lives in another country for more than a year”. OK, then in this regard, both immigrants and ex-pats would be considered migrants, and many ex-pats would also be immigrants, right? All hopes of clarity dissolve.

Then Weeks poses the question, “What is the difference between an immigrant and expatriate?” to an American (ex-pat?) teaching a course on Global Perspectives in Kazakhstan, who explains: “The two terms are mainly used to delineate uneducated, labor migrant workers from skilled, professional migrant workers. The former are commonly referred to as ‘immigrants’ whereas ‘expatriate’ is reserved for the latter.” That is not too far from my gut-feeling that it has something to do with what nation you are from and what your social status is… But then he adds that, “all immigrants are expatriates, and all expatriates are immigrants.” Yes, that is what the U.N. definition suggests. But is that really the case?

Then why do we bother to make the distinction? Let’s face it, ex-pat is such a more dignified-sounding term to use to describe a person living and working abroad, but what would happen if I referred to the people in my study as Mexican poultry-worker ex-pats? Would I be able to get a single paper published? How seriously would my work be taken if I called myself someone who studies expatriates as opposed to immigrants? I doubt that there are many funding agencies eager to dish out funds for the study of expatriation.
These final thoughts really illustrate the extent to which categories and labels are strongly guided by politics. Even in academia, where we are most aware of such things, our language is influenced by the politics of publishing, funding, and established norms. I’ll sum up this post with a thought borrowed from Dr. Ramey’s REL 102 course: categories are made up, but that is not to remove the profound implication of their meanings.

One thought on “Expat or Immigrant?”