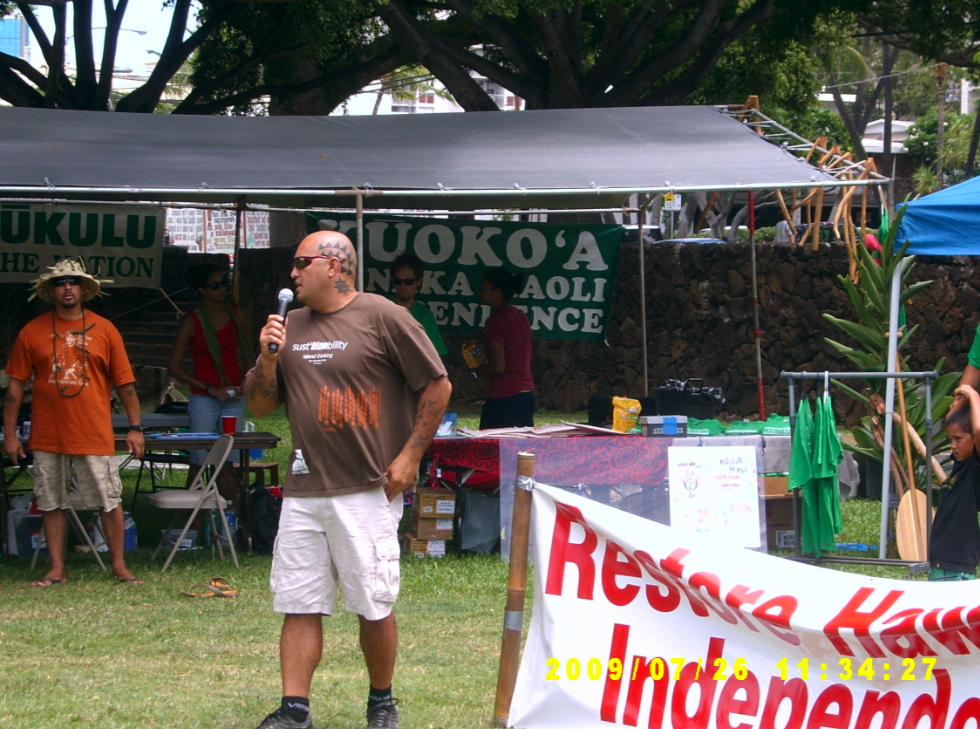 Prof. Greg Johnson, former Chair of the Department of Religious Studies at the University of Colorado at Boulder, studies repatriation and reburial disputes in American Indian and Hawaiian contexts, as a means to understand the ways religious claims are announced, enlivened, and contested in the contemporary moment. He was a guest lecturer at UA last year and has written the following unsolicited response to a recent post on our grad blog.

In your face resistance is a hallmark of Hawaiian culture. Colin McElvenny gets that right, and I find his thoughts interesting and provocative. I simply want to round out the picture a bit by way of adding a few observations pointing to the historical depth and political contexts of this phenomenon.

From fierce ki`i (images) of the god Ku, shark-tooth clubs, lua (“bone breaking,” a Hawaiian form of martial arts), male hula that resembles Maori haka in its aggressive style, and intense feats of physical prowess, including big wave surfing, open-ocean voyaging, skin-diving, to contemporary images and actions, including liberating objects from museums, occupying sites on the basis of sovereignty claims (including city parks and `Iolani Palace), to big trucks with intimidating bumper stickers (e.g., Haole Go Home), and, yes, even images of guns, contemporary Hawai`i is a place of intensely combative imagery.

As McElvenny suggests, one can certainly look to the hyper-militarized post-contact history of Hawai`i as one source of this phenomenon. There can be no doubt that violent episodes in colonial history (one thinks of the massacre at Olowalu and the forced removal of Queen Liliuokalani, for example, not to mention countless episodes of “gunboat diplomacy”) set the stage for in-kind responses, at least at the level of symbol. A similar point could be made about the manifest militarization of the islands from territorial times to the present. Here Pearl Harbor stands out in the “American” imaginary, but for many Hawaiians the target of resentment is how the U.S. government has treated Kaho`olawe, an island the military used as a bombing range for decades, quite literally blowing it to oblivion. Countless days of effort by Native Hawaiians to restore some life and integrity to the island are just beginning to show results several decades after the bombing stopped. Also notable for Hawaiians is the sheer presence of the U.S. military—not only in ports, but also on land, and lots of it, much of it land taken from Hawaiians in recent cultural memory. It would be hard not to turn to guns as a symbolic resource when they are what you see day in and day out. In terms of the gun shirts and stickers McElvenny describes, aspects of the Defend Hawai`i movement surely stem from this kind of quotidian antagonism.

Whatever its modern catalysts and expressions, I would simply want to add to McElvenny’s account by emphasizing that fierce images and actions were central to Hawaiian cultural and religious life well prior to the time of Captain Cook (1778). Indeed, one can argue that the pre-contact religious system was organized around violence and its threat, on the one hand, and peacefulness, repose, play, and sexuality, on the other. This complementary but agonistic dialectic found expression in the annual cycle of tribute to the paired deities Ku and Lono. During Ku’s time, warfare and conquest were focused upon. Once the Makahiki cycle set in with the rainy season, Lono’s time began, and it was punctuated by a cessation of warfare, and an emphasis upon sport and peaceful repose. It was a regenerative time during which the aloha spirit was meant to prevail.

After the death of King Kamehameha the Great in 1819, and with Christian influence in the islands growing, the “temple” religion of Ku and Lono celebrations was “abandoned” by many ali`i (elites), though many `ohana (families) kept its relevance alive in their own ways. After more than a century of Christian dominance in Hawai`i, the akua (gods) are making a comeback. Lono ceremonies (Makahiki) are especially prevalent, as Hawaiians look to their ancient culture for inspiration to regenerate their heavily taxed aloha spirit and to minister to the land and the ocean for the sake of its rejuvenation. Ku too has found renewed expression, though not in traditional forms of sanctified warfare, but in the metaphorical expression of battle in the present: protest movements. Beyond images of guns, if one listens to Hawaiian rallying cries in defense of their land and culture, one will hear an unmistakable summoning of traditional warrior courage: Ku`e, “resist, stand tall.” I am not suggesting that all Hawaiians wearing Defend Hawai`i shirts have Ku in mind. Some, I would guess, wear it as a fashion statement, and some others may wish to agitate for decolonization but have little connection to tradition. I have to say, however, that I am constantly surprised and humbled by how knowledgeable everyday Hawaiians are when it comes to their heritage, genealogies, and self-determination. Ku may be taking the unusual kino lau (form) of a gun sticker, but then again lots of religions postulate rather stark theories of incarnation.

I want to close by observing that “Defend Hawai`i” is one iteration of a broad-based sovereignty movement that has blossomed in particularly robust and diverse ways since the early 1990s. While unified on some basic principles—e.g., that Native Hawaiians should enjoy self-determination and that the U.S. government and some corporations have illegally appropriated huge swaths of Hawaiian land—the sovereignty movement ranges a vast spectrum and has many, many incarnations. One end of the spectrum is inhabited by hardcore activists whose dream and demand is that all of Hawai`i be returned to Native Hawaiians. They pursue this goal through direct action on occasion, academic channels, and international efforts to shame the U.S. government. On principle, these activists tend to avoid the organs and limbs of the federal and state government, including those programs and laws designed (at least putatively) to address Native Hawaiian needs. On the other end of the spectrum are Hawaiians who are largely comfortable with U.S. citizenship and the status quo, but who wish to see better social programs and so forth for Hawaiians. In the middle is a vast array of people working with the current political and legal structure to secure what rights and entitlements they can while also working to reform the larger system of governance and the economy it supports.

I would imagine that activists across the entire spectrum that I have (too briefly) sketched wear Defend Hawai`i shirts on occasion. Where did they go while wearing that shirt? To the lo`i (taro patch) to subsistence farm, to a car show, to church? And then where did they go? To a protest, to tend a grave, to go make some t-shirts to pay the bills?