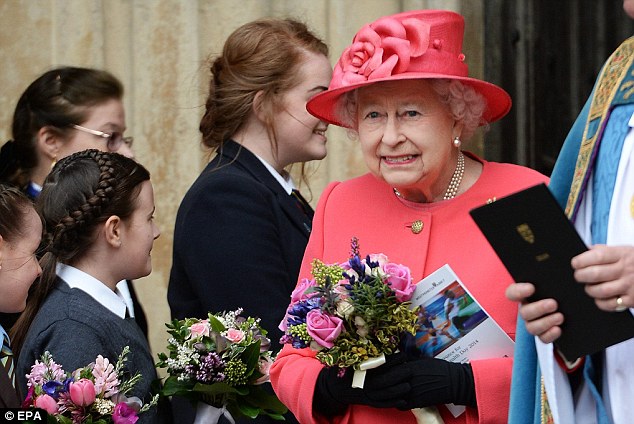 Thanks to tickets provided to us by the English-Speaking Union, Catherine Roach and I were in Westminster Abbey on March 10th to join Her Majesty the Queen and an assembly of loyal subjects in a ceremony to commemorate Commonwealth Day. The Commonwealth is a consortium of 53 states, most of which were part of the British Empire at one time or another: Canada, India, Pakistan, South Africa (not a member during the apartheid era), for example, alongside smaller nations such as Namibia, Malta, Kenya, Singapore, and Grenada. The Commonwealth Day Observance at Westminster Abbey, according to the Lord Howell of Guildford, “proclaims the vitality and ever-increasing connectedness of peoples across a third of the planet… to work together in every field, from the defeat of poverty and the stability of governance to sport and game, to art, music, and literature—and all in the best causes of humanity.” I invite others to theorize the proceedings; here’s a brief description of the event as I experienced it.

Well after the ticket-bearing congregation had been seated, The Earl and Countess of Wessex, and The Prince of Wales and The Duchess of Cornwall were escorted to their places of honor. Then, with significant fanfare, the Queen and His Royal Highness the Duke of Edinburgh were received as all rose to sing “God Save Our Queen.” In a bold juxtaposition of state and church, the national anthem was followed immediately with the Christian hymn “Immortal, Invincible, God Only Wise.” Flags carried by young representatives of all the Commonwealth nations processed in advance of the royal entourage which was accompanied by numerous dignitaries from the Church of England, the Westminster Abbey choir, and the Commonwealth Secretary-General, among others.

The ceremony, or observance, officially began with the “bidding” by the Dean of Westminster. Bonds of friendship among nations were celebrated despite differences in faith, economic condition, and geographic location. The Commonwealth Games, to take place this year in Glasgow, were signaled as a model for building a coherent international community. After a moment of silence, a prayer for freedom, peace, and justice was offered; it concluded with a common recitation of the Lord’s Prayer. This further Anglican framing of the event (in addition to the Abbey) was balanced somewhat toward the end of the ceremony when prayers were offered by representatives of some other religious communities contained within the Commonwealth: Roman Catholic, Buddhist, Liberal Jewish, Hindu, Baha’i, Shia Muslim, and Methodist.

Between these prayer moments, anthems were sung; dances, poetry, songs, and instrumental music were performed; biblical passages were read; and a variety of reflections were offered on such themes as the one body and its many members, the mutual respect and camaraderie that results from vigorous athletic competition, and the need for love to reign over the universe. The primary address was delivered Malala Yousafzai, who had been shot in Pakistan by members of the Taliban two years ago as she was traveling home from school on a bus with her friends. Now seventeen and living in Birmingham, England, Ms. Yousafzai spoke eloquently about the need to enable education for all children and to protect the rights of girls and women throughout the Commonwealth.

When the service concluded, the Royal Family processed down the side aisle on the way to the narthex of the Abbey. Our seats were in the north transept, at a remove from the major proceedings of the day but fortuitously remote, as it turned out, since during her exodus the Queen passed within a few feet of where we stood.

Prof. Trost is on sabbatical leave during the 2013-14 academic year. He is currently Visiting Research Fellow in the School of Philosophy, Religion, and History of Science at the University of Leeds, England.