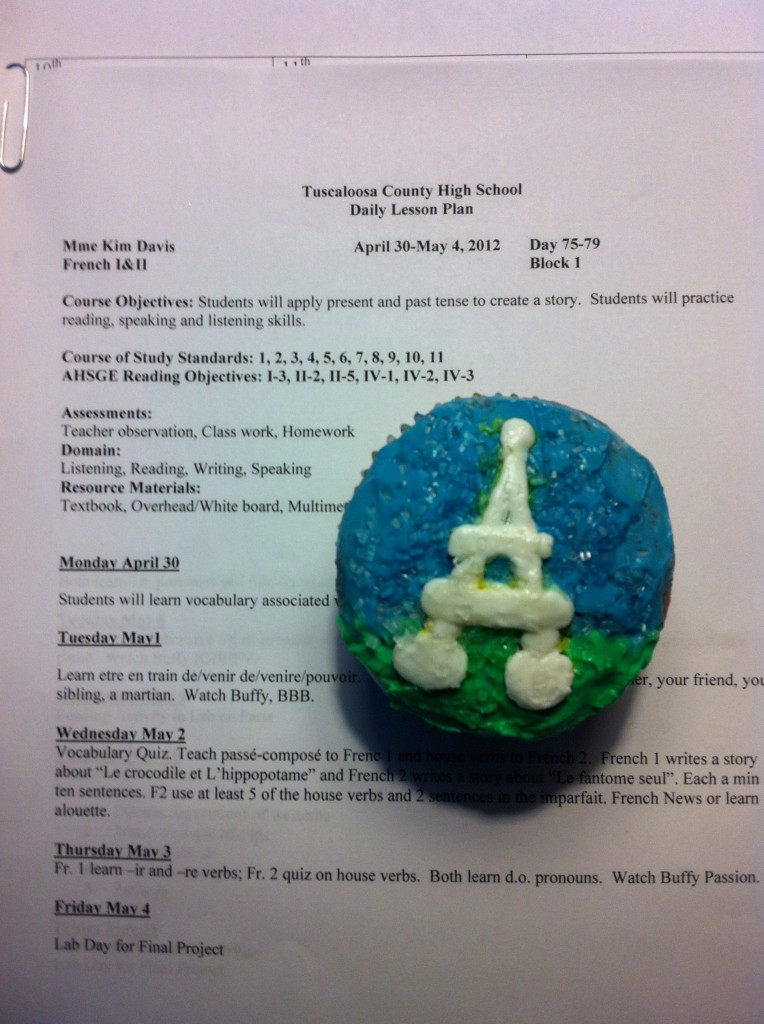 By Kim Davis
Kim Davis earned her B.A. in French and Religious Studies from the University of Alabama in 2003. She went on to get her Masters in French Linguistics and Literature in 2007 and a Masters in Secondary Language Pedagogy in 2010, both from UA. Kim now teaches French and Mythology at Tuscaloosa County High School.

I recently have gone through a period of questioning how much I have been able to accomplish in my job as a French teacher in a local high school.  When I interviewed for the job, I eagerly told my prospective bosses how I looked forward to the challenges of building a French program from the ground-up and even called upon my experience helping to re-invent the Department for examples of what I could accomplish.

I’ll admit it. I am frustrated with where I am professionally. The programs that I hoped to implement at that job interview have not yet come to fruition, and as a self-proclaimed over-achiever, the fact that I have not yet created a vibrant website, active French club, or aggressive social media presence bothers me.

So, the Department’s recent blog post about the department’s early days was nothing if not timely. See, I was a part of those early years. I worked in the main office in addition to taking classes as a major. I saw firsthand where the department started and experienced the process by which those in charge began to change it. I remember how exciting those early years were as we took steps, some large and some small, to improve and grow the Department.

Well, my French program is now what the Department of Religious Studies was those 12 or so years ago. I can’t feel bad that I am not bringing in French speakers in to interact with my students or have a lovely Vimeo account with my students doing French things. Those things will come. Right now, I have to start somewhere, and that somewhere is continuing to grow beyond the approximately 125 students I currently teach, refining the curriculum, and preparing to take a group to France in 2015. That’s not half bad for three year’s work. You gotta start somewhere, ya know?

What’s the moral of this story? Many frequent readers of this blog have already read how the skills we gained in the department help us in the real world, such my two found here and here.  Yet, no one has mentioned how the Department continues to educate us after we graduate. This Department reached out to us, the alums, inviting us to participate in this blog, and at least for me, it has been an opportunity to see what undergrads, professors, and alums are doing, studying, and researching. I may have my REL degree, but that doesn’t mean that I have stopped learning from the REL Department.

So, thanks Professors and Staff. Thanks for doing what you do. Thanks for growing the Department into something very special. Thanks for allowing your alums to continue learning and growing. Most of all, thanks for the reminder that we all start somewhere, and that we grow with baby steps.