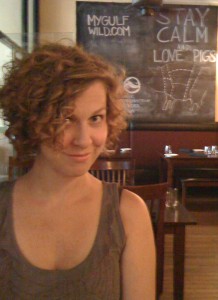 Tampa, FL.  I grew up celebrating what I took to be my “Southern heritage” of strong coffee, palm trees, and red beans and rice.  When I moved to Alabama after a stint in Appalachia, my students informed me that I was ridiculous to claim Southernness as part of my identity.  I can’t help but think that that rude awakening contributed to my interest in Southern Studies, in how various groups classify this complicated region and how those classifications shape certain relationships to power and something called “the past.”

My major in college was English.  Same goes for my M.A. and Ph.D., actually!  I always enjoyed reading, and my studies tracked toward literature early on.  That said, when I was an undergraduate, I had no idea what I wanted to do with my degree.  Very early on, I thought it would be cool to be a screenplay writer.  Then, when given the opportunity to pursue a MFA in creative writing, I thought seriously for a time about concentrating on fiction and writing short stories.  Eventually, I settled on continuing the literary studies route because I didn’t feel quite sure about where I wanted to end up.  I only knew that I loved going to school… and the idea that suddenly the cool kids would be the people who liked talking about what they were reading and writing was too good to pass up.  Looking back, I still think that was a dandy criterion for decision-making.

I took a few classes in religion while an undergrad, but they were mostly text-based (what happens when we approach one of the gospels as literature, etc.).  I learned that my own research emphasis (which questions authenticity claims in literary and identity theory) overlaps with the academic study of religion thanks to the very department in which I now work.  Ted Trost organized a conference on “The African Diaspora and the Study of Religion,” and I jumped at the chance to participate.  That was the first of many discussions about categories and culture I’ve been privileged to take part in with the scholars who would become my colleagues.  For me, it was academic love at first sight, and I continue to enjoy participating in multiple discourses and blurring disciplinary lines in my writing.

The “interesting” part of this question kills it for me.  Sorry… unless you count that summer back in ’03 when I made a go at busking in Park City…

When I first started graduate school, I thought my emphasis would be 20th-century American literature.  Then I took a course on feminism, and the theory bug bit.  I began signing up for classes on critical race theory, postcolonialism, queer theory, Marxism, migration and regional studies, film theory—really, anything I could find that would require some second-order analysis and allow me to ask different sorts of questions than what I had been used to.  I kept coming back to matters of how we talk about “identity,” and my research has maintained primary focus on theories of race and gender, as well as Southern Studies.

I’m happy to report that the full manuscript of a volume my colleague Houston Baker and I co-edited, The Trouble with Post-Blackness, has recently been delivered to Columbia University Press.  This semester, I have a few speaking gigs that accompany essays I’m currently at work on.  This March at SECSOR, I’ll participate in a panel responding to Ron Neal’s Democracy in Twenty-First Century America: Race, Class, Religion, and Region.  Later that month, I’ll be part of the Kristeva Circle meeting at Vanderbilt University, where I will present a paper on the politics of nostalgia in relation to gender and identification (using some favorite Woody Allen films!  That will be fun research).  Then in April, I’ll join some of my compatriots from the collaborative working group Culture on the Edge for a workshop on code-switching at Lehigh University.  Along the way this term, I’m working on editing Studying Religion: A Reader for Acumen Publishing.

Most recently, my favorite pastime has become hanging out with an infant who enjoys sleeping and eating (we share common interests, so we made fast friends).  I am an avid knitter, and when I need some serious de-stress action, I typically wind up knitting while watching sci-fi (Torchwood, Star Trek: The Next Generation, and Dr. Who are favorite stand-bys).  I also enjoy running (I’ve embraced the fact that I’m abysmally slow) and baking complicated recipes (it makes me feel like I can do math!).  Ooh, also listening to good records on my scratchy turntable.  I do that a lot.