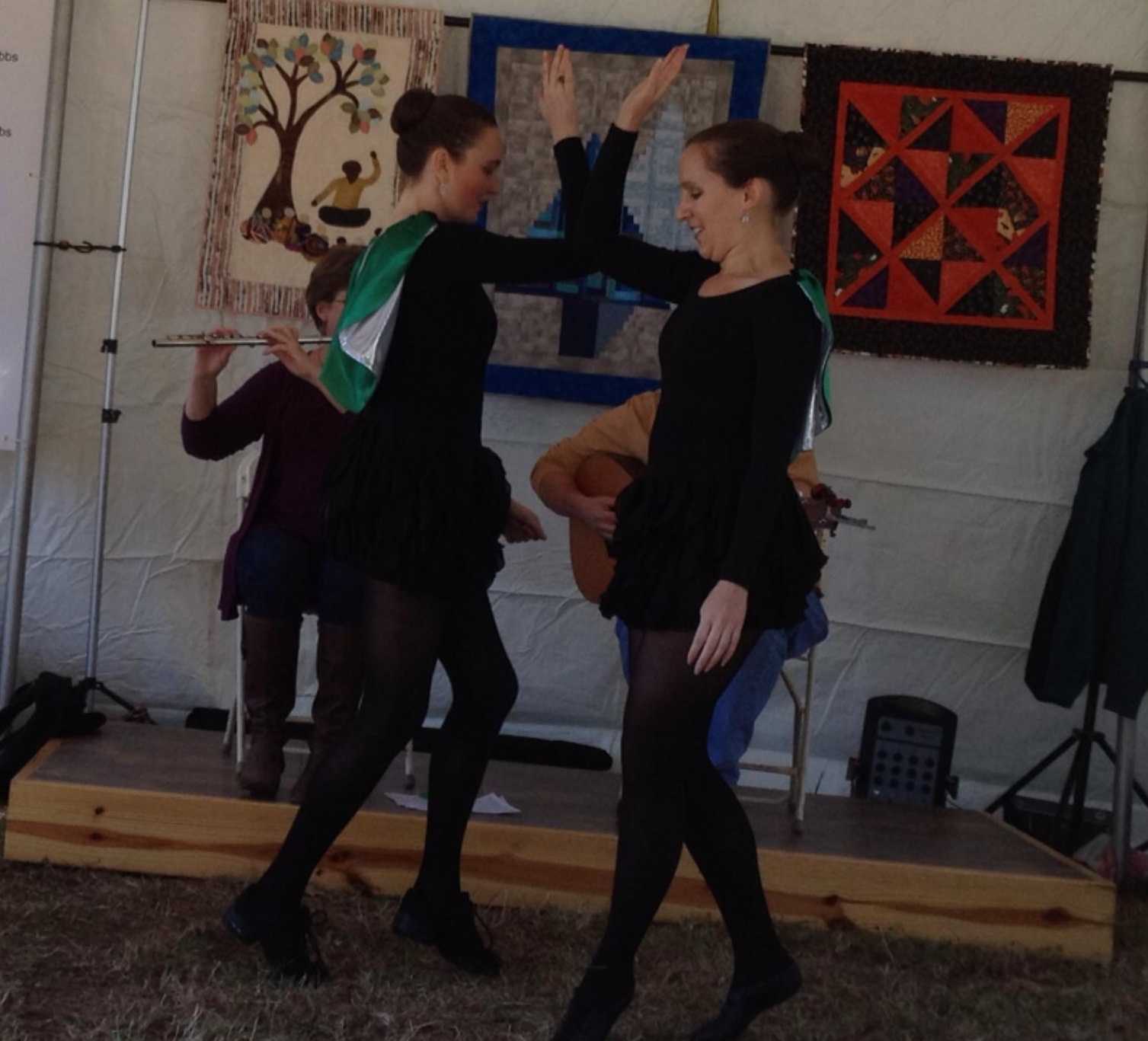 By Kim Davis
Kim Davis (pictured on the right) earned her B.A. in French and Religious Studies from the University of Alabama in 2003. She went on to get her Masters in French Linguistics and Literature in 2007 and a Masters in Secondary Language Pedagogy in 2010, both from UA. Kim now teaches French and Mythology at Tuscaloosa County High School.

It’s a question I have heard a lot in the ten years I have been a performer and teacher of Irish step dancing, and it’s always the first question people ask as if the reason I am dancing is to celebrate my long lost Irish heritage. You can probably imagine their cognitive dissonance when I tell them that I don’t know if I have any Irish heritage, I’m not interested in finding out, and I dance because I simply enjoy dancing. (I should also note that if the person is particularly prickly about my response, I work in the fact that I would go back to France before Ireland. That really befuddles them.)

It fascinates me that people assume I engage in a dance associated with a particular culture because of some cultural heritage, because no one ever assumes that ballet dancers have French or Russian ancestry.  Furthermore, Irish dance has evolved just like any other dance form, and if you were to go to a feis or the latest Michael Flatley spectacle, what you would see performed there bears a superficial resemblance to what you would see in a pub in County Cork or County Sligo.  So, I feel it is safe to assume that the reasons people get involved in Irish dance are as varied as the art form itself.

As I expanded beyond dance lessons and began performing in pubs with bands, I discovered a whole group of people who are passionate about anything having to do with Ireland, Scotland, Wales. They listen to Celtic music, watch rugby, and wear kilts, but above all they celebrate the fact that their family came from Ireland, Scotland, or the other Celtic nations. As I spent more time with these people, I began wondering why everyone was insistent on celebrating some ancestral connection to the motherland when I did not feel the same connection.

Now, I realize that “being Irish” or “having Scottish ancestors” is as much a way of forming and maintaining social groups as it is celebrating one’s heritage. I particularly think of Bruce Lincoln’s definition of affinity or creating sentiments of togetherness, solidarity, and belonging to create a social group. This shared “Celticness” creates a group of people in which in any other context may or not have anything in common. In time, I found myself entering into the same sort of discourses that I had initially found so curious.

Recently, when people ask me if I am Irish, I have begun to say, “I am now!” because I find myself engaging in many of the same group building discourses in order to build my teaching business and belong to a group that brings me much personal fulfillment.

The Alabama Academy of Irish Dance with the Vulcan Eejits at the Kentuck Festival of the Arts.