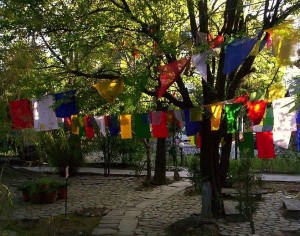 Hannah Etchison, a graduating senior majoring in Religious Studies with a minor in Asian Studies, is spending six weeks of this fall in India, staying primarily at a monastery where she will learn from the women and help them with their English. This is her first post about that experience.

I became enraptured with the study of Buddhism through a variety of experiences during my time in the Religious Studies department of the University of Alabama, but there was a specific experience that I have begun to revisit that truly captures what I find interesting about this ‘religion’.

I was fortunate enough to have a very small seminar course on Buddhism and the Environment with Professor Kalzang Bhutia. We took some close looks at Tibetan Buddhist practices involving environmental attitudes and naturally a discussion of Tibetan society and the political atmosphere of the location took place among a class of uninitiated and fairly ignorant undergraduates. Although the allure of Tibet, the myth and the mystery in the vein of Lost Horizons intrigued us, we were eventually presented with some alternate scenery in the cultural topography of Tibetan fantasy. If I recall correctly, a classmate with an interest in China pointed out some controversial opinions of the good that China’s infiltration and takeover of Tibet initiated, and some of the lesser-known horrors of pre-Chinese occupied Tibet, including torture, poverty, corruption, and social inequality. Doubting this, I looked it up for verification and found corroborating evidence. The article I read had considerably damning tone and presented a stark contrast to the mystique I was familiar with. Was Tibet really a debased, immoral society led by power-hungry clerics with the status of prophets? Was the shroud of mystery and the spiritual wisdom of Shangri-La just a work of fiction used to obscure the corruption and political agenda of these robe-clad fascists? Was communist China actually trying to help a backwards society, bringing egalitarianism and infrastructure to a primeval, barbaric society? Were the images presented commonly in the West just propaganda for an anti-communist agenda? Such questions troubled me greatly, but upon revisiting them with a little more critical knowledge of religion and the constructive processes of all societies, I realized that my place as a scholar of religion is not to prove one binary or another, but to challenge the construction of binaries and more importantly to examine how such dichotomies come to exist and become perpetuated by entities with personal motives. As Donald S. Lopez, Jr. mentions in his examination of the presentation of Tibet, “the important questions are why these myths persist and how they continue to circulate unchallenged.” (Lopez, Prisoners of Shangri-La)

Now, since Mr. Lopez has already kindly laid out many of the western myths focused on Tibet and its religion, what can I as an undergraduate add to the discussion? Because I have the amazing opportunity to go to the Indian Himalayas and volunteer as a teacher at a Tibetan monastery for women, I have a unique chance to look at an image of Tibetan Buddhism that is not imposed by foreigners, but by the practitioners themselves and their neighbors. Furthermore, I will see up close how the political borders of states affect or do not affect a regional religion. According to the website for the Jamyang Institute, for whom I am volunteering,

Jampa Choling Institute is situated in Meeru, Kinnaur, in the state of Himachal Pradesh. Kinnaur enjoyed close relations with Tibet, especially before India’s independence and China’s occupation of Tibet. It is said that the entire region of Kinnaur used to be Buddhist; the people from Upper-Kinnaur look more Tibetan than Indian. However, since the border with Tibet closed, Buddhism has been gradually disappearing in Kinnaur.

In the villages in Kinnaur, people draw on Hindu and Buddhist beliefs and practices. Almost every village has at least one Hindu temple and one Buddhist temple. The village of Meeru reveres the village god, who is responsible for everything that happens there. The village god has been around ever since the villagers can remember and is respected in a large number of villages, with residences in two temples, one old and one new. (http://jamyang.org/pages/kinnaur.html)

The borders of Tibet and India, Buddhism and Hinduism, religion and politics, are constantly negotiated and continually contested. Their existence is not solid, it is theoretical, and there are uncountable reasons why one theorist needs validation over another. The critical examination of these contested borders is what I intend to examine, describe, and hopefully further understand within the context of my location.