Ben Simmons, an REL major, graduated in 2009. Since then, he has started his own online business. This originally appeared as an article in the Department’s 2011-12 Newsletter. View the Newsletter here (PDF). 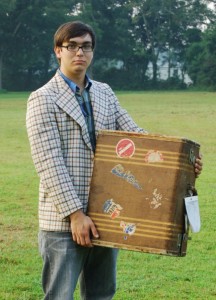 I came to the University of Alabama in the fall of 2007 with an eye toward a degree in History because I enjoyed it, without considering how useful that degree would be out in the “real world.”  So, I signed up for other classes that I thought would be “easy A’s”. One of these classes was Introduction to Religious Studies taught by Professor Russell McCutcheon, and if you know anything about that man, then you will know that he saw right through me from day one. Raised the son of an evangelical pastor in Southern Alabama, I figured I would do well with minimal effort. That is the way my religious classes had always been. In the end, I did do well, but not without being challenged by the academic study of religions.

About half-way through the semester, I gathered up my courage to ask him a question after class, a question I had been pondering for some time. He didn’t give me an answer, but instead invited me to a luncheon discussion at the Department later that day. The discussion had nothing to do with my question, but the issues it raised encompassed the next few years of my life and shaped it for the better. The people at the luncheon discussed what it meant to study religion from an academic perspective and how to discourse about something that was passionate to billions of people without being biased. This intrigued me as it went against every notion that I had previously held about the idea of religion, but in the end, I saw the value of the academic study of religion, not only for discussing religion but for the everyday practice of life.

I graduated in May of 2009 with a double major in Religious Studies and History, and my time spent in Manly Hall taught me so much more than I expected. Not only did I learn to “try” to approach things objectively (and I say “try” because I also learned that it is nigh impossible for any person to really accomplish this), but I also learned how to research properly and how to look for the agenda behind actions or words. In my life, these lessons have been invaluable, not only in my personal relationships but also in the professional world. I started an online media retailing and wholesaling business that sells across more than 30 websites and fulfills orders internationally. And I could not have even come up with my business plan without the skills I learned in the Department of Religious Studies at the University of Alabama. In fact, writing that 30 page business plan was nothing compared to one of Dr. Ramey’s papers! I cringe at the thought of seeing all that red on those pages if he were to ever get his hands on it.