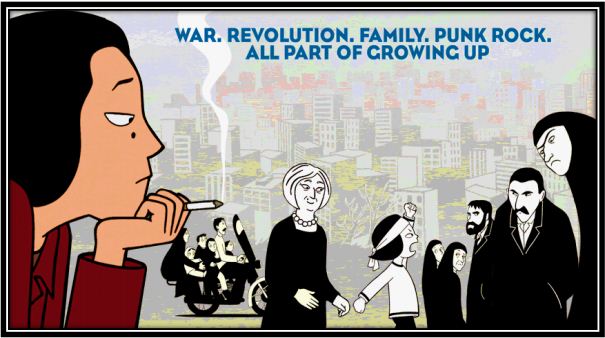 Liz Long is a junior from Colorado who is double-majoring in Psychology and Religious Studies. She is interested in the effects of religion and culture on behavior. This post was originally written for Dr. Rollens’ course,
REL 360: Popular Culture/Public Humanities.

Persepolis, a film based on Marjane Satrapi’s autobiographical graphic novel of the same name, looks at a number of oft-discussed issues in the study of Islam. Though the story takes place post-Iranian revolution, many of the problems Marjane faces are not contained to this time frame, people, or culture. Of particular interest is the portrayal of women, not just in Iran, but also during Marjane’s time in Europe. Islam is frequently portrayed as inherently oppressive to women, especially in contrast with Christianity. However, the film demonstrates that while parts of the Iranian regime restrict women’s rights and freedoms, the negative attitude towards women and their sexuality is essentially the same across cultures.