Vincent M. Hills is a senior at the University of Alabama majoring in History and minoring in Religious Studies. This post was originally written for Dr. Rollens’ course, REL 360: Popular Culture/Public Humanities.

Lage Raho Munnabhai is a prime example of the statement that “appearances can be deceiving.” What at first glance looks like a mediocre comedy ends in a film that not only provokes laughter, but also serious thought. The movie attempts to show that people, regardless of their social status or religious affiliation, can learn valuable lessons from Mahatma Gandhi. The film’s protagonist Murli is in love with a radio DJ whom he has never actually seen. As he makes his first appearance, it is obvious he is supposed to be some type of “thug”. Murli wins a contest and is eventually interviewed by Janhavi, the radio DJ. He tells her a series of lies that make her fall for him, and the movie is about him trying to further his relationship with her using Gandhi as his “Jiminy Cricket,” his invisible companion who supplies him with all the information he needs to be an expert on Gandhi’s life. From this point on, the purpose of the movie—to demonstrate the relevance of Gandhi to a variety of people—becomes clear.

END_OF_DOCUMENT_TOKEN_TO_BE_REPLACED 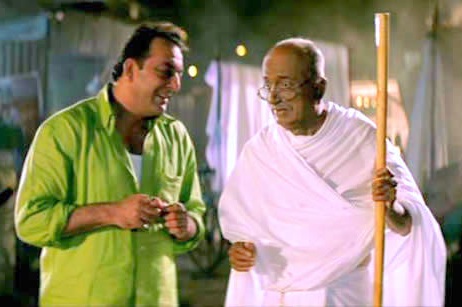 END_OF_DOCUMENT_TOKEN_TO_BE_REPLACED

If you’ve been keeping up with the latest developments in the REL department, you probably know that we have a brand new one-credit course this year: REL 360. REL 360 screens a select group of movies throughout the semester, and the next one is coming up on Tuesday, Oct. 21. Everyone’s invited, not just those enrolled in the course! 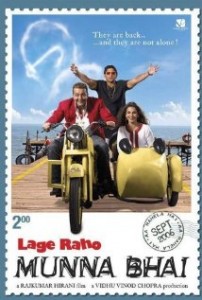 We’ll be watching Lage Raho Munna Bhai. We’re hoping for a good turnout from students involved in Asian Studies, too. Dr. Ramey will be on hand to lead the discussion after the film; he’d probably be happy to chat if you have any questions you about the Asian Studies Minor. Here are all the details about this event: 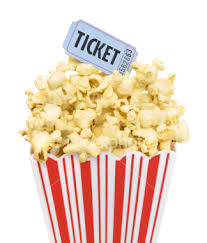