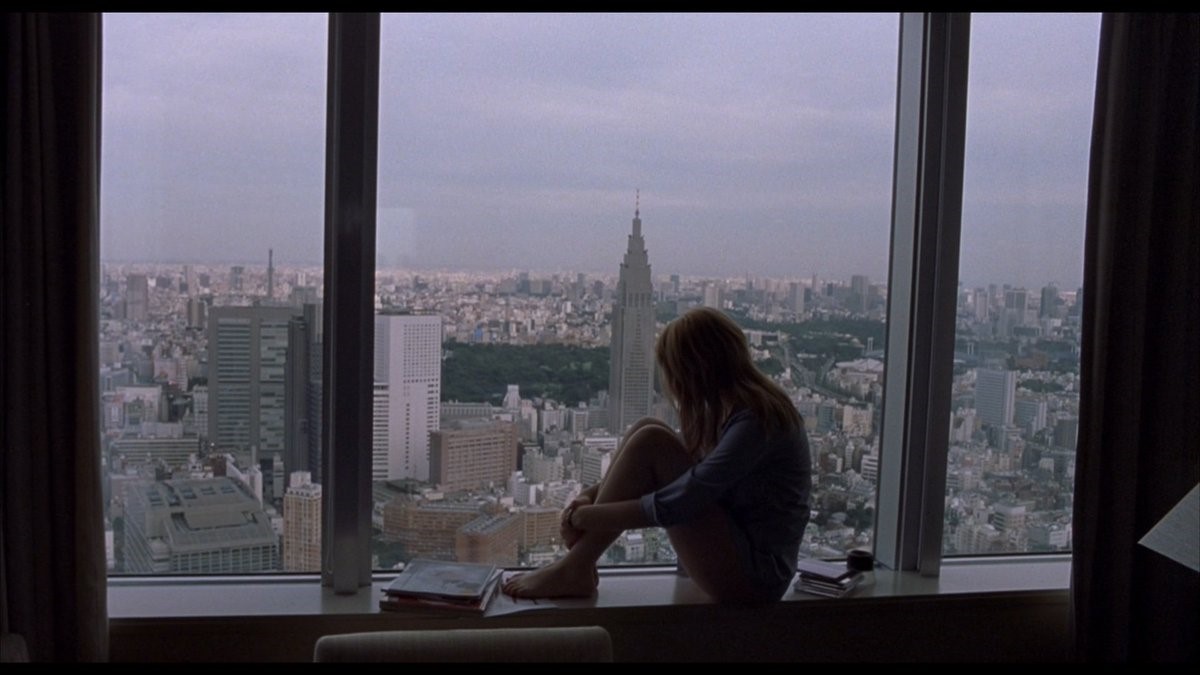 Alexander Leonardo Tamez is a senior majoring in Religious Studies. He resides in San Antonio, TX. The following blog post was written for REL 360: Popular Culture/Humanities.

“Sometimes there’s so much beauty in the world, I feel like I can’t take it, and my heart is just going to cave in.”
–Alan Ball, American Beauty

The image of Charlotte (Scarlett Johansson) overlooking Tokyo in Lost in Translation epitomizes the sense of loneliness she experiences. Her setting in a massive foreign cityscape with ten million others forces her isolation and causes her to confront herself. The overwhelming vastness of the city reminds her of her loneliness and magnifies it proportionally with her heightened sense of self-awareness, thereby intensifying her distress; which is skillfully captured by the shift of perspective that the camera permits, creating the illusion that Charlotte is bigger than the city: the source of her anxiety. The window reflects Charlotte’s insecurities, putting them on display for all to see, yet the physical barrier of a sheet of glass also suggests her fragility – her hesitance of entering into the outside world. At first Charlotte is unsettled to realize how alone she is in the tranquility of her own mind (the room acts as her subconscious), but she learns that isolation can wean one away from dependence on the external world in order to nurture a true sense of autonomy. Internal contemplation in turn, produces external awareness. Being curled against the window in her room, as if mimicking a fetus in the womb, portrays the development she must undergo as an individual before she can ultimately reenter into the outside world.

Charlotte, as we learn, loves photography (something writer/director Sofia Coppola did at Cal Arts), and as if in a single exchange of words we can imagine how she fell in love with her husband John (Giovanni Ribisi) – himself a professional photographer. It is ironic that he would run off into the external world to capture its superficial appearance because it reflects his inability to capture Charlotte’s emotional depth, instead being charmed by an actress (someone whose job it is to pretend). Her increased awareness of the situation creates perpetual tension between the desire to love John and the knowledge of not being in love with him anymore. However, the choice to be single seems more traumatic than remaining in a failed relationship when romance is conflated with happiness. Charlotte tries to suppress the growing presence of her conscience by diverting it with self-help CDs, visiting a temple, and calling a “friend” she knows could care less. It isn’t until Charlotte meets Bob (Bill Murray) that she finds solace in being herself.

Like Charlotte, Bob also loves the arts – he’s a movie star, but his star is fading (whether it be due to keeping his career alive, or salvaging whatever is left of it); and now he can only see himself for what he is underneath the artistic façade: a brand, for the whiskey he sells is attached to the mystique of his name. But Bob’s brand has aged and he is expected to posture himself like an “old friend”, or “Roger Moore”. The image of who he was suffocates him and confines him to the past, preventing him from participating in the moment. The whiskey is a particularly potent metaphor for the sobriety of disillusionment and the insatiable drunkenness of the media. He is like a bartender who keeps serving customers long after the bar has closed (long after his star has faded); and like any drunkard, the media doesn’t want to listen to Bob, they just want to see him act. And yet, Bob must face the camera, looking at his mirrored self in its lens, while its aperture acts as the window that risks exposing him for the world to see. He must continue to act to cover his disillusionment. However, rehearsing to suppress it only intensifies it due to his increased awareness of it. His disillusionment becomes the secret he must hide from the entire world, leading to loneliness.

When Bob and Charlotte meet there is no window (the barrier which prevents human touch), yet their mutual unfamiliarity creates a doorway for compassion by identifying traits in each other that they see in themselves. Bob is unaware of Charlotte’s marital stress, and Charlotte isn’t sold by Bob’s celebrity brand. In turn, Charlotte provides the key for Bob to reclaim his authenticity and Bob possesses the key of wisdom that will lead to Charlotte’s self-acceptance. The bond that they create empowers them to enter the outside world anew. At the end, after Bob gently whispers the ineffable into Charlotte’s ear, they disappear into the crowd; and as the distance between Charlotte and Bob lengthens – as we follow Bob drawing closer to authenticity – the city grows bigger and bigger, and we begin to see the light shimmering on countless windows.