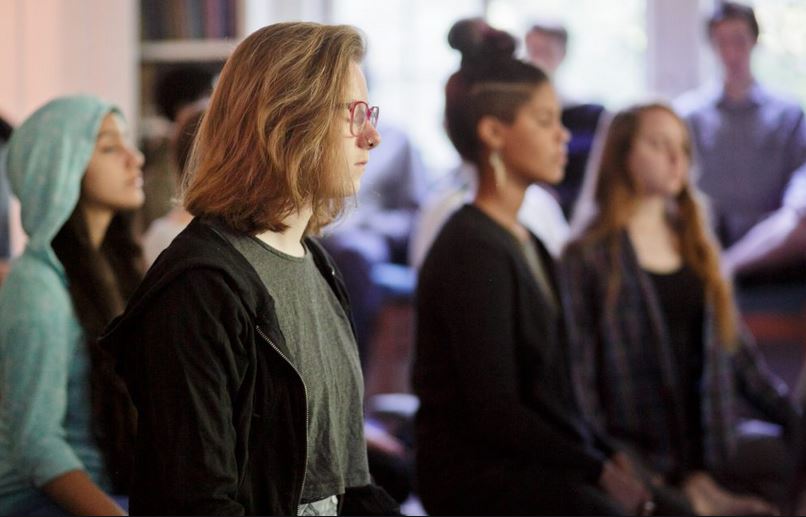 A couple weeks ago I was at a session of the American Academy of Religion’s annual conference where the topic of experiential learning came up, mentioned in the context of classes that do such things as invite students to meditate so that they can experience for themselves a taste of the mindfulness that they’re reading about in the course.

It seems to me that such approaches are responding to wider trends in academia that, in part, aim to counter the inevitably larger (and sometimes huge and thus impersonal and maybe even alienating) class sizes — what with cuts in funding — by coming up with new ways to engage (and thereby attract and retain) students. Sure, the pedagogical movement known as experiential learning predates all this, and can therefore be linked to a specific theory of learning, but to the degree that it is now tied up with such things as student-centered learning, living-learning communities on campuses, and, of course, outcomes/assessment initiatives, it’s tough to see it as somehow removed from the current challenges facing higher ed. But whatever the structural factors that have led us to a moment when such approaches are advocated and then tracked and tallied by administrations, in our field some faculty are adopting approaches that are designed to provide students with some sort of first-hand experience of the religions studied in class.

It has long struck me that there are a number of problems with such approaches, however. But this post isn’t about what I think.

For, as was made clear by another scholar attending that AAR session, adopting such a classroom activity is entirely dependent on just what you’re teaching, for there’s a large number of courses where we’d surely land in plenty of hot water if we invited our students either to mimic or re-enact the practices under study. (As was made plain, scholars teaching courses on Islam certainly don’t have the same freedoms to adopt these pedagogical methods in their classes.) Using an experiential learning approach could therefore be seen as an instance of what my colleague, Steven Ramey, once called accidental favorites, whereby claims, practices, or institutions seen as normative often get preferential treatment, whether we know it or not, such as a class focused on simply describing, in rich detail, some action instead of a class that follows that up by trying to explain why anyone would even do such a thing in the first place — with the former reserved for classes on familiar items and the latter approach probably expected of a course on things seen as foreign, exotic, or maybe even dangerous.

But there’s another problem, as another colleague present at that session later pointed out: it risks trivializing the people whom we study. For it takes some action that is interconnected with the so-called life-world of a person and isolates it as if it was something that we could try on for ourselves — but without all of the other entanglements or implications that usually come with it (such as actually believing this or that or living this or that way). To put it another way, despite the supporters of experiential learning likely thinking that they’re taking the participant really seriously by inviting students to engage in some of their local practices for a while, it’s the “for a while” that’s the problem, for it’s easy to imagine those who actually take such practices seriously, as part of who they see themselves to be, being just a little put off by what they might just see as, well, tourism. (Cue the critiques of modern appropriations of mindfulness.)

As for me…? Well, our Department offers a variety of internships for our grad students, which are things that count as experiential learning, sure — but they’re all about using and refining the skills that they’ve learned in our classes, and doing it in some possibly unexpected placed: whether that be working with a magazine editor and book publisher or maybe a staff member on campus who is working on making websites accessible. And because it’s about skills, those internships are not about the people, claims, or actions we may study in classes. So yes, applying outside class what student learns in our classes, so as to reinforce and even advance classroom knowledge, can be tremendously beneficial, but engaging in the practices of the people we study in any way other than one informed by considerable preparation for detailed and continuing ethnographic fieldwork strikes me as risking far more than it might accomplish.