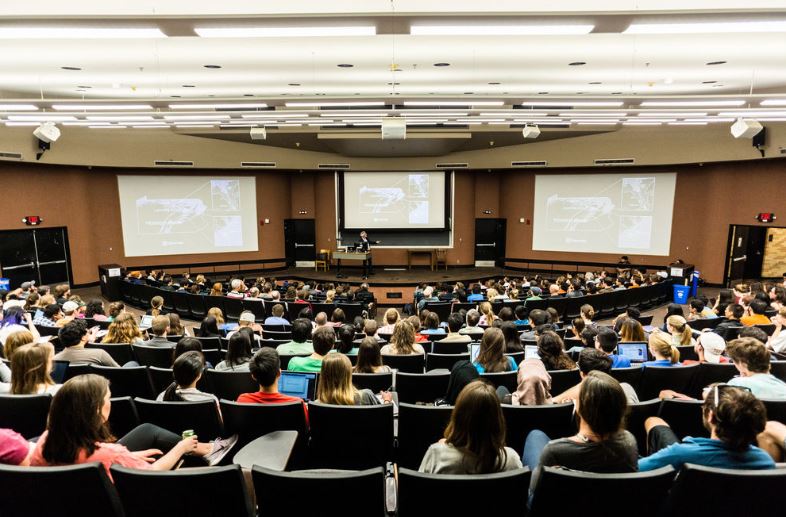 At the University of Alabama, honors courses are offered by each department to count towards an Honors College designation. The courses offered are typically very similar to non-honors courses in their material, but they primarily differ in class size; non-honors introductory class sizes hover anywhere between 80 to 200 students, while honors courses typically cap out at around 30. As an Ambassador for the College of Arts & Sciences, I am often meeting with prospective high school students and their parents to discuss the College, give tours, and answer questions about life at UA. Many times, while meeting with these students, another ambassador and I will share details about the variety of opportunities and involvement options that are offered on our campus – the Honors College being one of them. While in these meetings, I have heard numerous ambassadors who are part of the Honors College characterize their experience and they never fail to highlight one fundamental quality – smaller class sizes.

“What this entails for the student,” the ambassador might say, “is that every student gets noticed, their learning experience is enhanced, and ultimately, better academic results are achieved.”

Because I have never taken honors courses at UA, I have not had the opportunity to experience the supposed differences between an honors and a general intro course. Now, thanks to Prof. Emily Crews’ class, I have experienced both – I am now an “insider” in both a typical, large enrollment introductory course as well as a small honors course. Throughout the semester though, and as I mentioned in my first post, there was not a major change in the material that was taught; I could still refer to my old class notes. The class was taught from the same book, Prof. Russell McCutcheon’s Studying Religion: An Introduction, and aside from minute variations that mostly developed from differing teaching styles, the courses are predominantly the same in terms of content. The class form, on the other hand, was radically different.

While my introductory course offered intriguing readings and compelling lectures led by the brilliant Prof. Merinda Simmons, a major component that I did not even realize I was missing was in-depth discussions with fellow students. (I should add that I do recall having some time in which we were encouraged to discuss particular concepts or chapters with those sitting next to us. However, when there are more than 100 students in the room, who mostly do not know one another at all, it is difficult to suddenly engage in thought-provoking discussion on the spot. Moreover, the layout of the room also made discussion difficult, as each student was situated in their own little swivel chair that is actually connected to the long desks which stretch horizontally in rows across the room. These swivel chairs are positioned so that you must be facing the front of the room, rather than toward your peers during an exercise, unless you are forcibly holding your chair against its centered position.)

This spring, in the honors course, I have been able to revisit the same topics which perplexed me and led me to the department where I would quickly declare my major. The difference, however, is that this time around, I was privy to incredibly impressive, curious, and challenging conversations that would not be possible without dedicated student engagement. While such striking conversations could have just as easily occurred in my introductory course (or even more striking, given the 100-plus students in the room), the form of the class dictated the result. That is, the number of students and the design of the classroom (yes, the attached swivel chair/desk combo) is immensely influential in how the course will play out. And while Prof. Simmons and Prof. Crews may have been teaching from the same book, what they could each do with the students, how they could profess, and how they could facilitate student interaction in the class was, ultimately, a product of setting.

Although large enrollment lectures are commonplace for core introductory courses at a large, public institution like UA, there actually are some noticeable distinctions. Those ambassadors were right all along. In Prof. Crews’ class specifically, many exercises that she has had the students participate in would not have been possible in my lecture class. It would have also been much more difficult for every student to participate in discussion in my REL 100 course. As a result, I do think that the students were not only more engaged with Prof. Crews, but with each other, unknowingly forming bonds and relationships through their persistent sharing on such intimate topics. With more overall involvement and energy in the room, Prof. Crews is then equipped to give more precise, personal feedback to each student. Whether “better academic results are achieved,” may be up to the individual, but from where I am sitting, the class discussions on typically controversial subjects were definitely enhanced. I thoroughly enjoy hearing what every student has to contribute.

A student in any given class has no idea that there is such a difference as a result of the seemingly inconsequential setting of the class. Only through the comparison of now experiencing both do I have the ability to see such contrasts. So, while content may have been almost identical in the honors and non-honors introductory courses, the form ultimately decides some of the student’s experience.