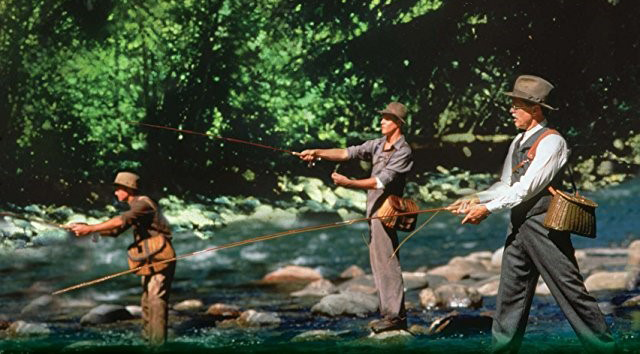 A River Runs Through It was screened in REL 360, a one credit hour course that one may take up to three semesters. The 1992 film about a family living in early twentieth century Montana portrays the lives of two brothers, Norman and Paul Maclean. Norman, the more educated, older brother, moves from his hometown, while Paul, the younger brother,  just can’t seem to ever leave. The one thing that the two brothers do seem to share a bond over is fly-fishing. This is mainly due to the fact that Norman understands how important fly-fishing is to his younger brother Paul.

This movie is one of my favorites that I have ever seen. I could not help but feel as if it was much like my own family. The feeling of having a brother that you are so close to, don’t completely understand, but love anyways. Although I am an older brother, I feel I am more like Paul than my younger brother is. There is apart of me that doesn’t really know everything that goes on with my brother, and as we get older we grow apart but are always best friends. My brother is like Paul in the way that he doesn’t ever seem to want to leave where he comes from even though he may distance himself from our family the older he gets. I loved the way this movie showed how growing up is something that is inevitable but the way we handle it and the people we choose to keep close is up to us.

Paul’s death in the end after catching that fish and fighting for it the way he did was a testimony to how he lived. He lived hard-headed, and most of the time it seemed he was over his head in the things he did, in the same way that he would get swept away in the current of the river. It always seemed, nevertheless, that he would come out on the other side, solid ground under his feet, having accomplished what he had set out to achieve. Then one day he got too deep and never could stand up, both literally and figuratively.

This is by far one of the best movies I have seen. Its testimony to loving even without complete understanding is applied in so many ways: religiously, racially, or even more broadly yet. Our differences should never affect our ability to love the people in our lives. Those differences, rather, should be grounds to learn more and grow in our understanding of others.