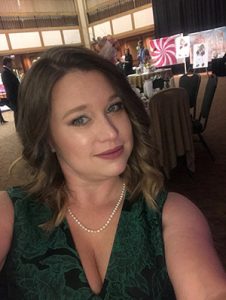 I have a Bachelors of Arts majoring in Religious Studies and minoring in Advertising (2007). I was slated to double major, however, in my final semester I discovered that I needed extra, unplanned classes for the Advertising major so I decided to drop it to a minor.

I wasn’t really certain what I wanted to do, only that I wanted to attend UA. I knew that I didn’t want to be one of the standards: lawyer, doctor, teacher or engineer. The mother of one of my friends suggested Public Relations so that’s what I originally declared. After my first semester, I switched to Advertising.

I took REL 220 Survey of Asian Religions in my second semester. I won’t name the professor but that class was messy and all over the place and I loved it. I was hooked and declared REL as a second major. I learned that everything that I thought could be clearly defined was much more subjective. It was truly eye opening when I sat in a certain someone’s class and we discussed things like soil and dirt. It was also extremely fun! The department as a whole was small and close.

When I graduated in 2007, I became a restaurant manager for Logan’s Roadhouse. I opened and operated locations in the Birmingham and Huntsville areas. In 2013, I joined the Waffle House team as the Area People Director. I supported 28 restaurants across North Alabama and Northeast Mississippi. I joined Edward Jones Investments in January 2018.

My REL background has been instrumental in my success. I use things that I learned in my REL classes daily. Not only did it teach me how to think critically, it also helped me hone my communication skills.

Don’t let others discourage you from your choice of major. Careers as a whole are much more fluid and there are humanities graduates that are very successful. A business degree isn’t your only option if you don’t want a career in one of the standards: law, medicine, education, or engineering.