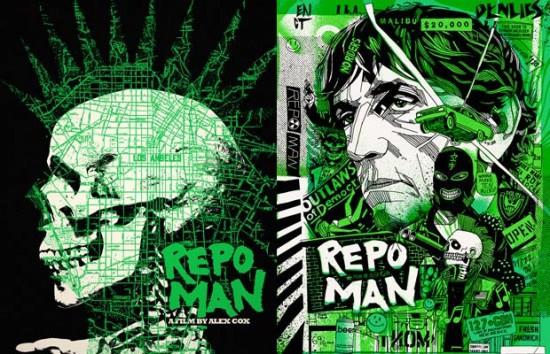 The film, Repo Man, opens on the outskirts of a Los Angeles highway, the city of lost angels. A Chevy Malibu is recklessly speeding down the highway, the driver catches the attention of a motorcycle cop. The officer pulls out from behind a billboard and proceeds to pull him over. He walks up to the window. The driver of the Malibu is a very shaken, sweaty, and nervous man, who appears to be blind in one eye. The man doesn’t respond when the officer asks him why he was speeding, or when the officer asks about his suspicious behavior. The officer now makes his way towards the trunk to search it for any contraband. The driver finally responds and shouts to the cop “you don’t wanna open that”. It’s too late unfortunately; the trunk of the Malibu swings open, and bright red light flashes and the officer is vaporized into thin air, leaving only his smoking boots. The driver pulls away.

The protagonist enters in the next scene, Otto, an Iggy Punk who lives in LA during the 80’s. He is currently being fired from his job as a super market stocker for being late one too many times. After he gets laid off he gets drunk and listens to punk music with his other punk friends by an abandoned factory which they graffiti. Around 3am Otto leaves the group, to mourn alone over the loss of his job, perhaps. He goes to the LA railyard where he is isolated, sets up shop on some shipping container, and proceeds to drink until the sun rises. I view this as meditation. He begins to make his way back home when a man in a Cadillac pulls up next to him and asks him if he wants to make $10. Otto responds with “Fuck off fag, I don’t swing that way”. The man explains that he has him all wrong and that he needs help getting a car across town and he needs Otto to drive it. He even offers him $25 instead. Otto agrees, but while he is pulling away, he is attacked by the car’s real owner. The two thieves drive across town and Otto learns that he has been tricked, not into stealing a car, but into repossessing it (repossession refers to taking back property through judicial processes, foreclosure, or self-help when a borrower fails to make required payments). Without even thinking about it, he has found his new job as a repo man. Although he first took the job because he needs the money, he soon falls in love with the lifestyle of a repo man. The man who tricked Otto now becomes his mentor, teaching him all the tricks of the trade–from cocaine use to chronic alcoholism–and all while driving in the late hours of the night until sunrise.

We learn that the pine tree air fresheners are artifacts; you collect one for every car you
repo. Midway through the movie we also learn that Otto’s parents are zombies who sit in front of the TV all day, get stoned, and give their money away to African witch doctor priests on the TV. This is also the only time his parents are shown in the entire film, so it was very hard for me to determine if that was what his parents were really like, or if that is just how his subconscious viewed them. It is at the this point in the film I begin to worry that none of the events are actually happening, and Otto got hit by a train that night in the railyard. This would mean he is dead or in a coma. We also see traits like this in Otto’s friends. They are typical criminals who like stealing pills from a pharmacy, robbing liquors stores, and stealing cars. They seem like very stock characters. Everything is this universe is labeled as generically as possible, with a white label and
blue lettering. For example, all the beer is labeled “BEER,” all the cigarettes “SMOKES,” and all the food is canned and labeled “FOOD”. I believe this further supports my claim that Otto is in some type of coma dream, being that he could not imagine any new labeling for all the different products in the world in his condition. His mentor also tells him that repo men have a code, and that not many people live by a code these days. This code is an allusion to the rituals a repo man must perform, I see a very close relation between these rituals and the rituals performed by Forest Whittaker in Jim Jarmunsch’s Ghost dog, The Way of the Samurai. Very much like in Ghost Dog, the protagonist begins to devoutly take the role of his character. Once he is paid for his first job he turns into a devout student of the “repo” arts, learning all the aspects and rituals taught to him by his predecessors. Ghost Dog does the same thing by reading ancient Japanese books, though he is self-taught as opposed to Otto who learned from the older Repo Men.Whether it be practicing sword fighting at sunrise, or repo-ing cars in the middle of the night, these men live and die by their code.

The overall theme of the film, in my opinion, is never to judge a book by its cover. This happens all over the course of the film. When we are introduced to Otto, he is nothing more than an L.A. street punk. Throughout the film, he is learning, and being literally thrown into new and dangerous situations. Each one of the different Repo-men have something to teach him from their years on the road. Constantly having to adapt to new people and environments and then become immersed in their norms in order to be accepted.

The director and screenplay writer, Alex Cox, attempts to shoot the movie as though it
were an old comic book found discarded in some old basement. He accomplishes this aesthetic by utilizing comic strip panel scene changes, and large exclamative titles to introduce any new characters. The lighting is always dark because most of the movie happens at night. They used one of the old 60 mm tapes to record the film so it has a grainy, warm feel. The film played almost like an old VCR tape, with skips and pops put in the film on purpose.

I do not believe the purpose of the film is to solely entertain, and this is not to say it was
one of the most entertaining pieces I’ve ever seen. One cannot, however, overlook the big ideas Cox is trying to get across, such as parents who seem non-existent of their children’s lives or resurrection (whether it be by the older repo man, Otto, or the mechanic), but all of the characters’ lives are changed drastically since meeting each other, with two of them flying away in a glowing Chevy Malibu at the films conclusion while the other lies dead in a pool of blood. But to find out which ones, you’ll just have to watch the movie.