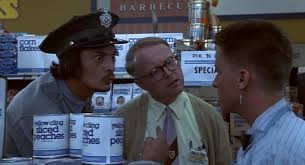 Repo Man ,directed by Alex Cox, is a cult culture classic that follows the extremely unusual story of Otto, a punk teen, through his transition from a scattered part-time worker to repossessing cars for a repo agency. On a macro level, the film is used to exemplify the role that identity plays in relation to the existence and manipulation of myth in society. Along with these utilizations of myth and attitude come the cyclic allusions to the genre of apocalypse and its role in human life and religion.

Upon watching the film, I found it somewhat similar to the book of Revelations. Much like the book itself, the movie was chaotic and hard to follow. Events don’t seem to make sense or align in coherence with one another but are meant to carry some significance. Also implied is the circular and repetitive movement of attitude shown by the punk teens of the suburbs. Otto and his friends were raised in the suburbs and rebel from them in their teen years, claiming to be fighting an oppressive power over their lives. In the beginning of the film, however, Otto still returns home and relies on his parents for money and Food (as every manufactured product is interestingly named after itself). In the later moments of the film, when Otto has broken free of the suburban style, he is considered divergent. An agency of all blonde professionals begin hunting down an “alien” car and the Repo Men involved with it. In a scene where Otto’s old friends, punk suburbians who have been robbing shops, meet the woman with the metal hand (the head of the agency hunting the car) the woman shows zero disturbance to the attitudes that the teens express. Building on this, the woman with the metal hand is not affronted by the punk attitude, perhaps suggesting that it, too, is a “normal” and expected aspect of society whereas peaceful coexistence of diversity is not. To me, this truly defined the members of the culture being ridiculed in the film. Because the teens are still within the social norm, due to the fact they would eventually return to the suburban lifestyle and despite that they break the law, they aren’t a threat in the eyes of the enforcers, the agency. This can be interpreted to mean that “normal” and “accepted” motives mean only to cover up or extinguish the creative and unique outlets available to those who are different, without necessarily attempting to be so. The agency represents those that give and take authority from myths to redefine and maintain social forms as suggested by Bruce Lincoln in his chapter “The Politics of Myth” of Discourse and the Construction of Society.

I suppose, recognizing my interests, I was focused a lot on the idea of bias and prejudice as I found it represented in the film. The agency set against Otto and the Repo Men and their connection to the glowing, “alien” car all had blonde hair or wore blonde wigs whereas the Repo Men were pointedly different, in both method and style, but were united by a code of respect and method between them. The message of the movie clearly speaks to the creators and audience, but goes even further as to suggest that individuality breaks the momentum of societal affiliation. I mention this last aspect as a gateway into Otto’s friends at the beginning of the movie. Otto says that Duke is just another white, suburban punk wannabe like him as he dies (and blames society for his existence).

The film concludes with Otto and the stick-out amongst the Repo-Men, Miller, riding away in the glowing car that no one else was able to touch. This final distinction shows me one more layer of social rings that conform to a definition. The Repo Men follow a code, the blonde agency look to cease individuality and push the suburban ideal, but Otto and Miller could never conform to either, becoming self-aware; mentally divergent.