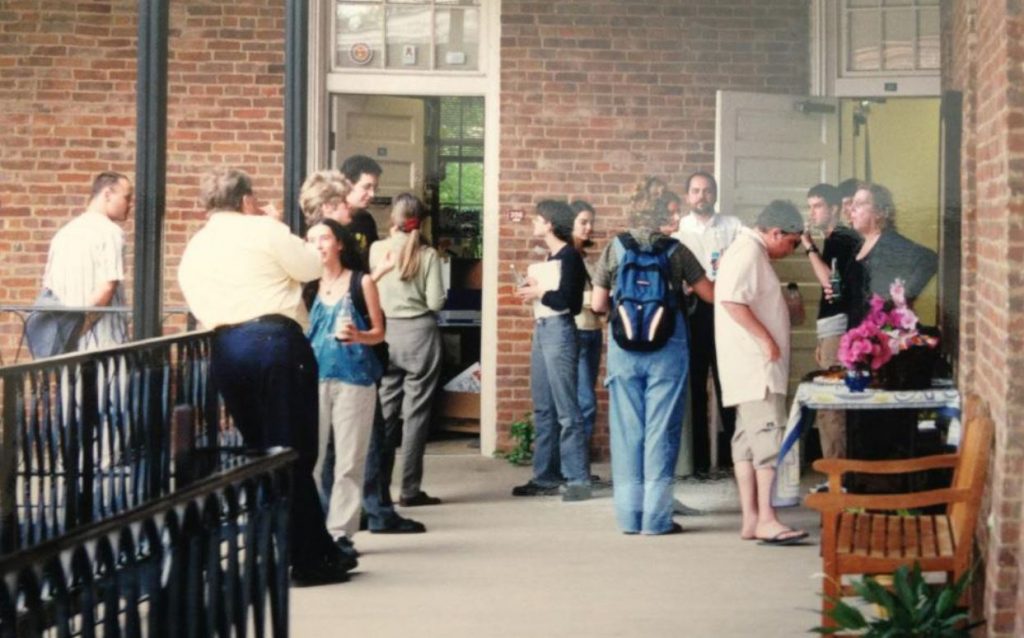 Have you heard? We have a new Department website.

And, as a result, I’m all discombobulated.

The old site, which we’ve had for about 15 years, is a place I’ve grown quite accustomed to visiting for tidbits of information about the Department’s past — i.e., what courses did we teach in the Spring of 2004? What was that name of that student worker back in 2006? Where can I find a PDF of an article I used in class that time…?

So pretty much everything in our Department made sense to me in light of that website. It was a way to orient myself, since the site was a bit of an origins narrative for me.

You see, I was involved in making much of it — an event took place in the Department? Better take some pics and make a web page right after; that was in the days before Facebook, and the site played a prominent role in our reinvention, for it was a way not just to communicate with students but also a way to help them identify with what this little Department was becoming.

We would never be accused of hiding our lamp under a bushel.

It was also a way to get students in the Department learning how to use technology; many of the pages were made by student workers over the years — pages like the time a former member of our faculty came back to give a guest talk. 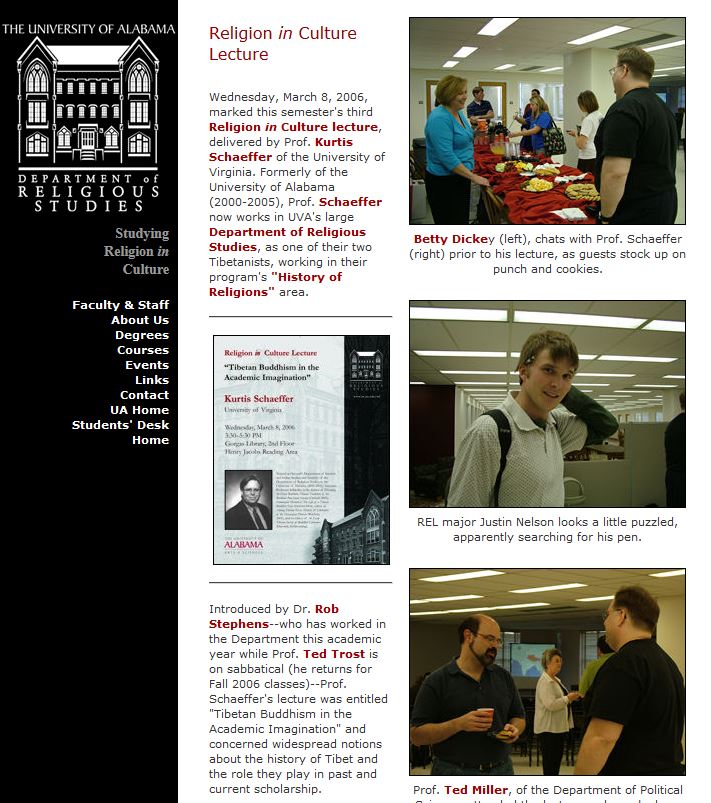 Over the years, it had grown to well over 400 pages, and many of them were substantive, providing information on the field that people elsewhere got accustomed to using. (Sorry for the broken links our new site has introduced….) But it worked poorly on smartphones (which were not even invented when we started that site, of course) and, with the Department now on Facebook, Twitter, Instagram, Vimeo, and now Soundcloud, we needed to rethink the work a website did for us today.

So, with input from Mike Altman, one of our in-house tech gurus, our College’s tech office got to work.

I’ll admit that I was uncooperative at first; resigned to losing my baby.

But I must say that I’m pretty pleased with the outcome — somehow, thanks to etech’s ingenuity, we were able to keep a bit of the “look” that has come to be associated with our Department. 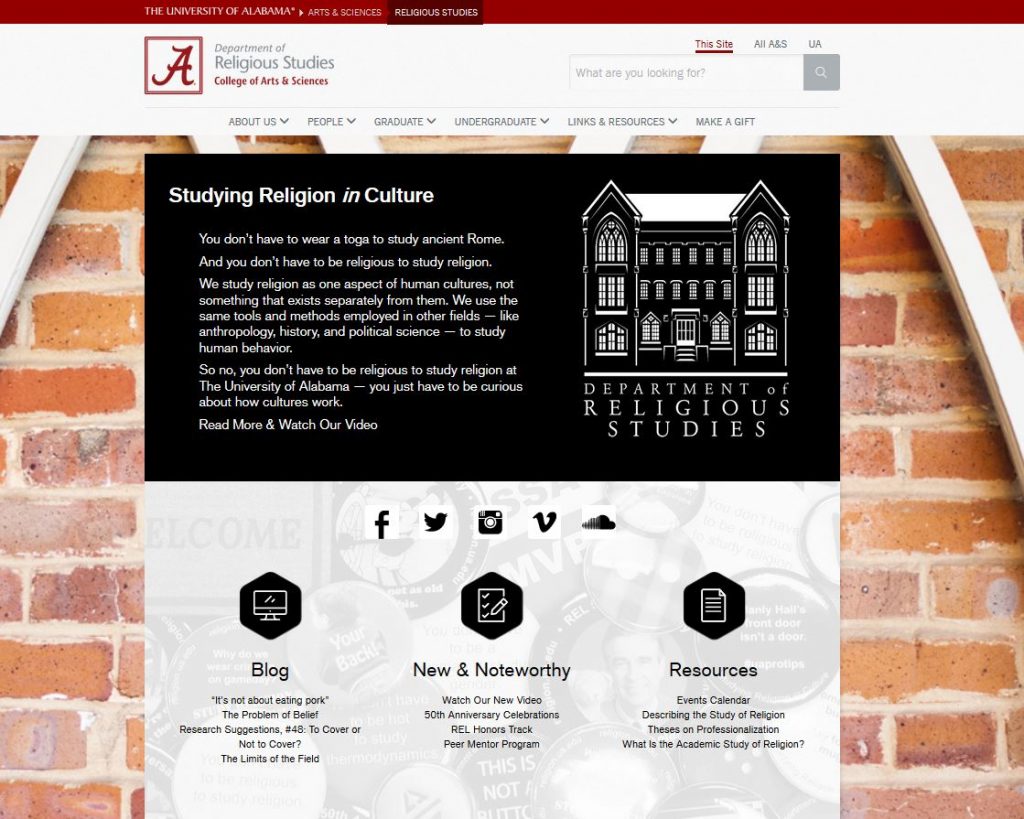 I knew where everything was on the old site — I was involved in the naming system for the files and pics, after all. But now…?

For instance, take what happened just the other day.

We’re moving pictures from the now off-line, old site to newly created “archival” photo albums on our Facebook page. There were hundreds of photos, on what have become little known pages, on the old site, from guest lecturers to student events. So we’re moving a sampling of those images over to Facebook (that was Mike’s idea, as a solution to the problem of the old site disappearing), where we can caption them and tag people, inviting some longtime grads to take a stroll down memory lane.

One of those pages is devoted to our Silverstein Scholarship, given out each Spring semester during what we, here at UA, call Honors Day.

Now, I know that at the end of my first year (2001-2) we didn’t have much of an Honors Day event — the opening pic, above, was from that year. We still hold it on the balcony to this day, but we now have resources to put on a rather nicer event, with, I should add, rather more substantial awards for our students. In fact, we didn’t even know, back then, that we had the Silverstein award to give out. So, understandably, we’ve never listed that first year’s award winners on our Silverstein web page….

But then, looking over the new version of that page, I noticed a group of 17 students listed as having received it for 2002-3.

But we didn’t award it that year….

You see, early on we got in the habit of awarding it in the Spring of any given year but considering it as an award for the coming year, to help students fund their further education (whether here at UA or elsewhere, should they be going on to further studies). So receiving it in, for instance, the Spring of 2002 meant that, although we awarded the funds right away, we considered it to be an award for the 2002-3 academic year.

And so, according to our new site, we awarded it in the Spring of 2002 to those 17 students.

But I knew that we didn’t.

After all, the Spring 2002 Honors Day was that small affair pictured above, where, as part of an informal event, we only had the ability to recognize the accomplishments of Clay, Kathleen, Jeremy, and Nic. We didn’t award any Silverstein Scholarships.

So what do I do when such quandaries present themselves? (Let them go is just not an option, by the way.)

I went next door to the main office and recruited the efforts of everyone who happens to be here.

So I called Betty, our Department’s longtime admin assistant, over to a computer and showed everyone the new website; I explained the years and how the award worked (Betty knew that already, of course); I exhibited my mental breakdown by focusing just a little too much on the issue, I’m sure — Caity, working in the main office this summer, started flipping between web pages to compare things; Andie, a grad who’s in Tuscaloosa for the summer, went down to the lounge, got up on a stepladder, and compared the website’s names and years to those on the award plaques that hang high on the wall; and Betty….? Well, she went to the filing cabinet and emerged with hard copy files dating all the way back to 2002, with print-outs of emails that I’d sent to her, instructing who was getting which award when and for how much.

And through the combined mental effort of four people — one with a PhD and one who has worked here for 30 years — we were perplexed but we solved it.

It took us about half an hour.

The interesting thing, though, is that Betty and I were involved in inventing all of this, back in the very early 2000s, and I actually made most of those web pages — but we had no recollection of what we’d done back in 2002.

Lesson 2: don’t trust memory as a verbatim repository of past events.

(Come to think of it, it might have been longer than 30 minutes. Maybe 45. Not more than an hour, I’m pretty sure…)

It turned out that not long after that initial Honors Day, back in 2002, we learned that we had this new endowment and, after a faculty committee discussed its use in light of the donor’s wishes, we began awarding it that very first year, retroactively, as it were, after Honors Day had already happened — so that our students could immediately begin benefiting from a donor’s kindness.

Betty and I had forgotten all of this. Completely. But it rings a vague bell now…

So that first group of students listed on our Silverstein page — some of whose names I’ve not thought about in many years, so this quandary was a nice chance to remember some old faces — never went to an Honors Day celebration (thus explaining why we had no pics of them getting their awards), since they just got a letter from me in July 2002, informing them of their good fortune.

Yes, a copy of the letter was in Betty’s file too.

Lesson 3: hard copies are a good thing to have.

The interesting part about all this, at least to me, is that because I’d forgotten what we did that very first year, I came to take for granted procedures and traditions that we had developed long after; so, in making sense of my world in general (and that new web page in particular), it turns out that I had anachronistically projected those understandings backward in time, as if the things we invented at a specific moment in history were themselves timeless and thus always around. That’s why I couldn’t make sense of the 2002-3 awardees’ names on the new site or even on the plaque down in the lounge — I kept saying: “But we didn’t give out the Silverstein at Honors day in April 2002?!”

I was right, of course.

But I was also wrong.

For we gave the awards that summer, after Honors Day and just before the new school year started.

Lesson 4: be careful how much mythmaking you do coz you may start to believe it yourself.

Oh, and I learned, or better re-learned, one final thing in the midst of all this:

Lesson 5: if you have a question, just ask Betty. 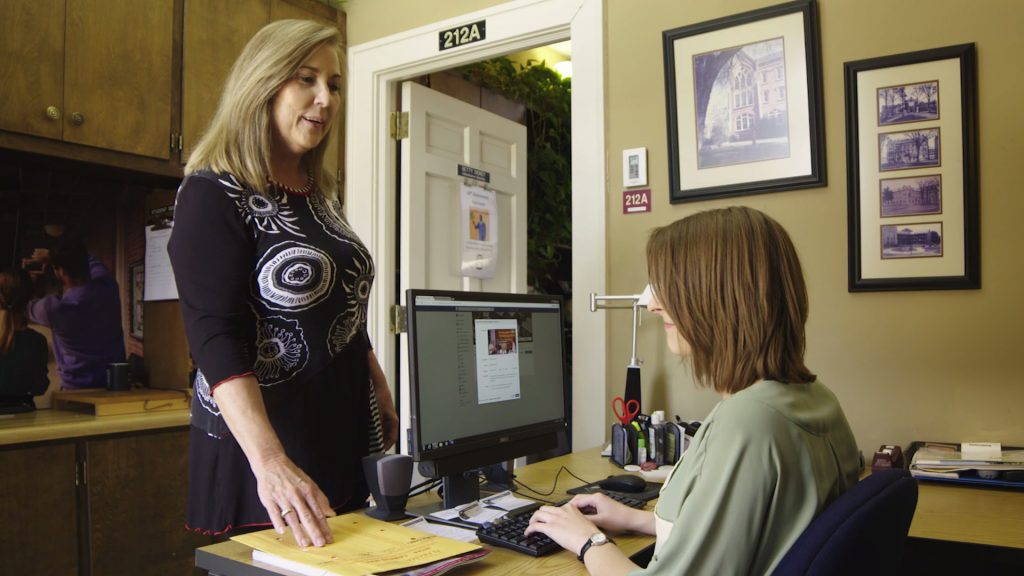