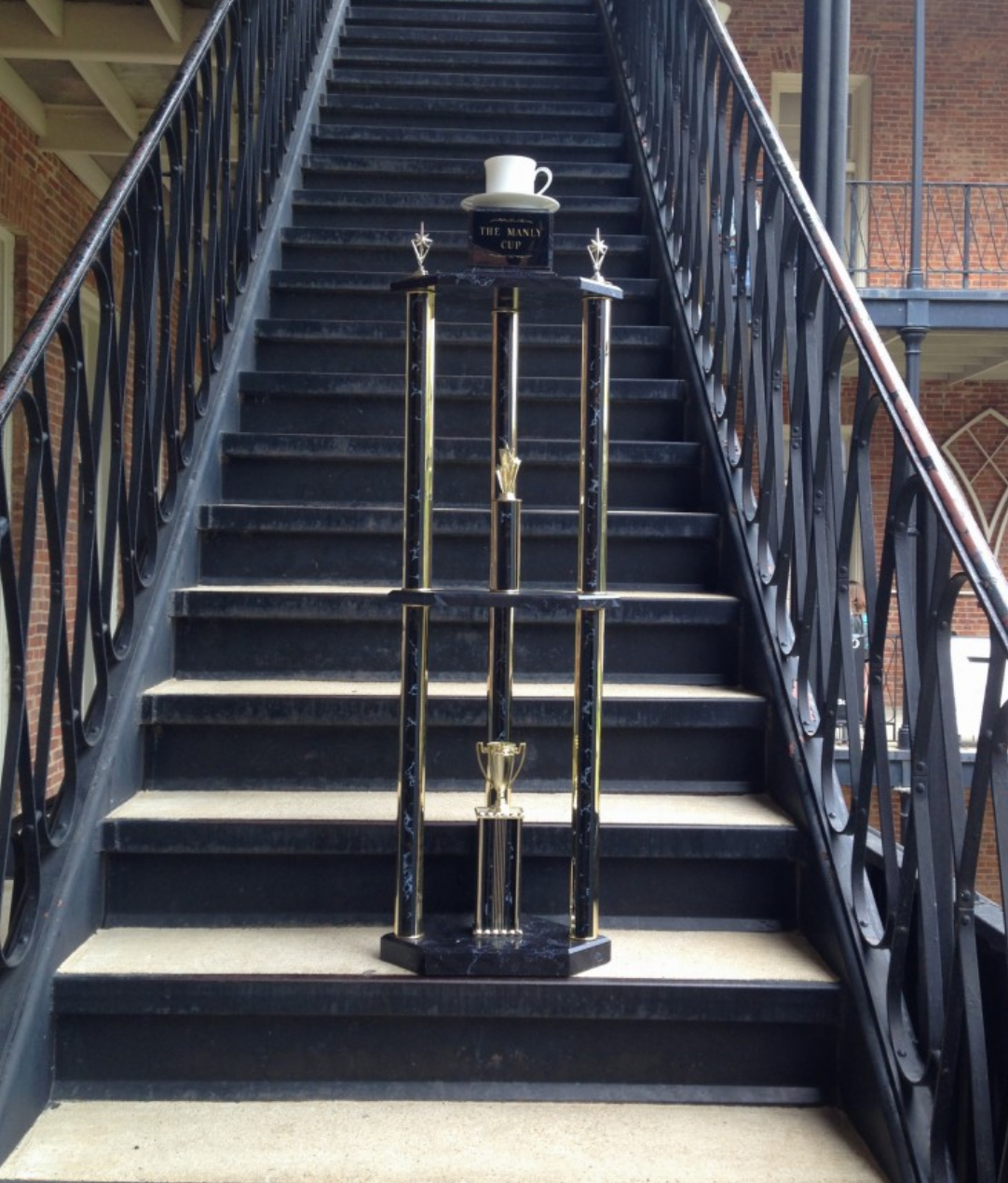 Yes, it’s that time of year again — the Spring semester’s classes are winding down but the competitive spirit is ramping up, in preparation for the what is now almost a decade old tradition: the Manly Cup.

Old timers know that it started, back in 2008-9, with a self-designed trophy that communicates the event’s austere sophistication (it has a tea copy on top, after all) but also a baking competition between the students, in which (or so rumor has it) our own Betty Dickey simply bought one of the team’s a really nice cake at a local bakery. The other team not only didn’t realize what was happening but marveled at their competitors’ delicate skills. 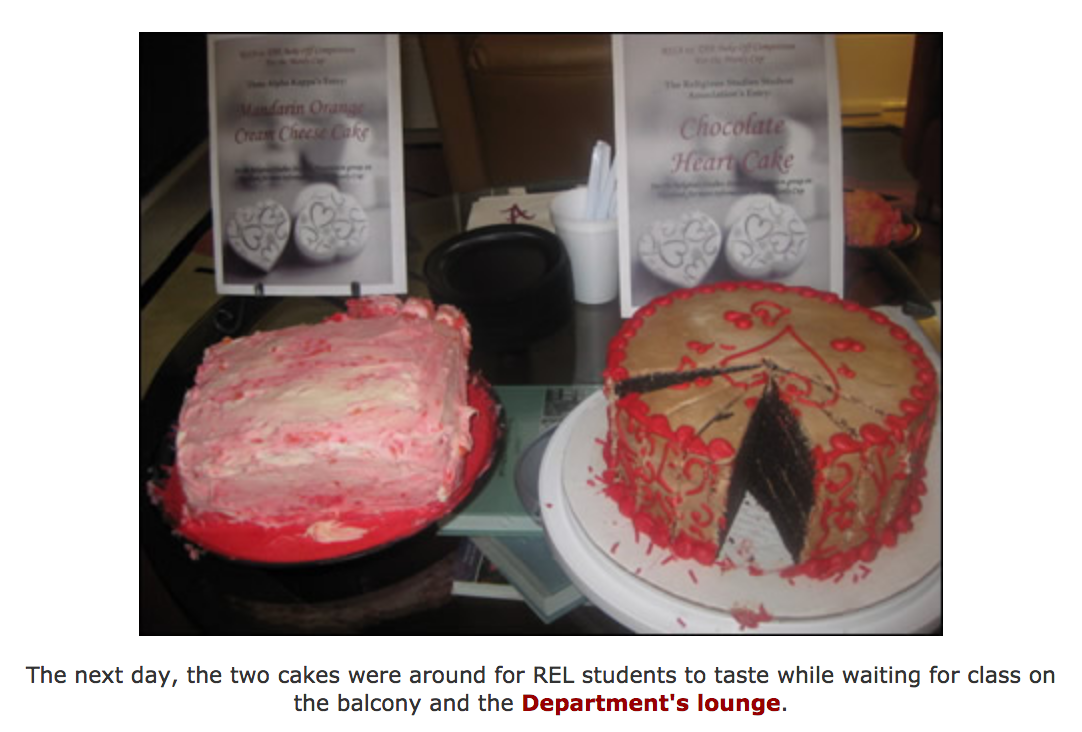 In subsequent years bowling, lawn games, a return to baking, and then kick-ball all followed, with the 2014 tournament restructured as the eternal struggle between faculty and students. Wikipedia Races was the theme of 2015, with faculty losing badly to the quick-thinking students, whose fingers flew over the keyboard like fast fingers flying over a computer keyboard. (2015’s victors are pictured below, taunting the faculty with their post-victory team photo.) 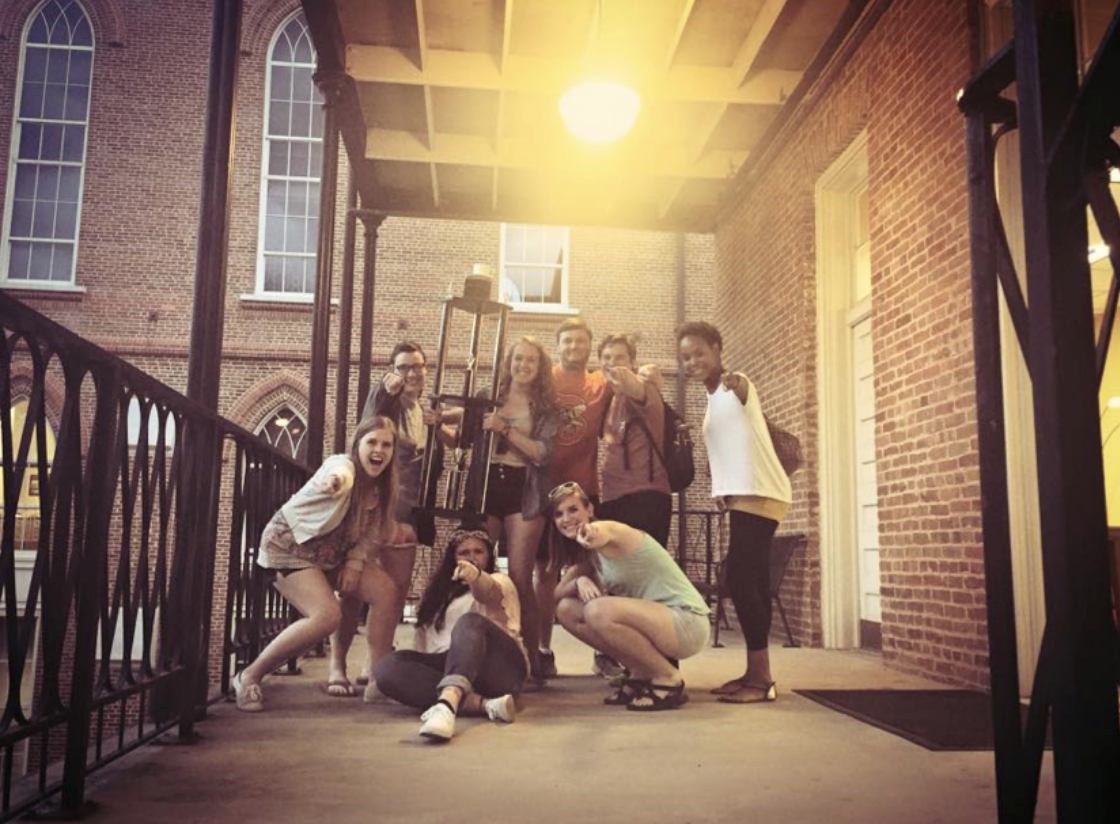 Then, in 2016, badminton on the quad provided the faculty with an opportunity to crush the students and humbly accept the coveted cup. “Look sad, students…” 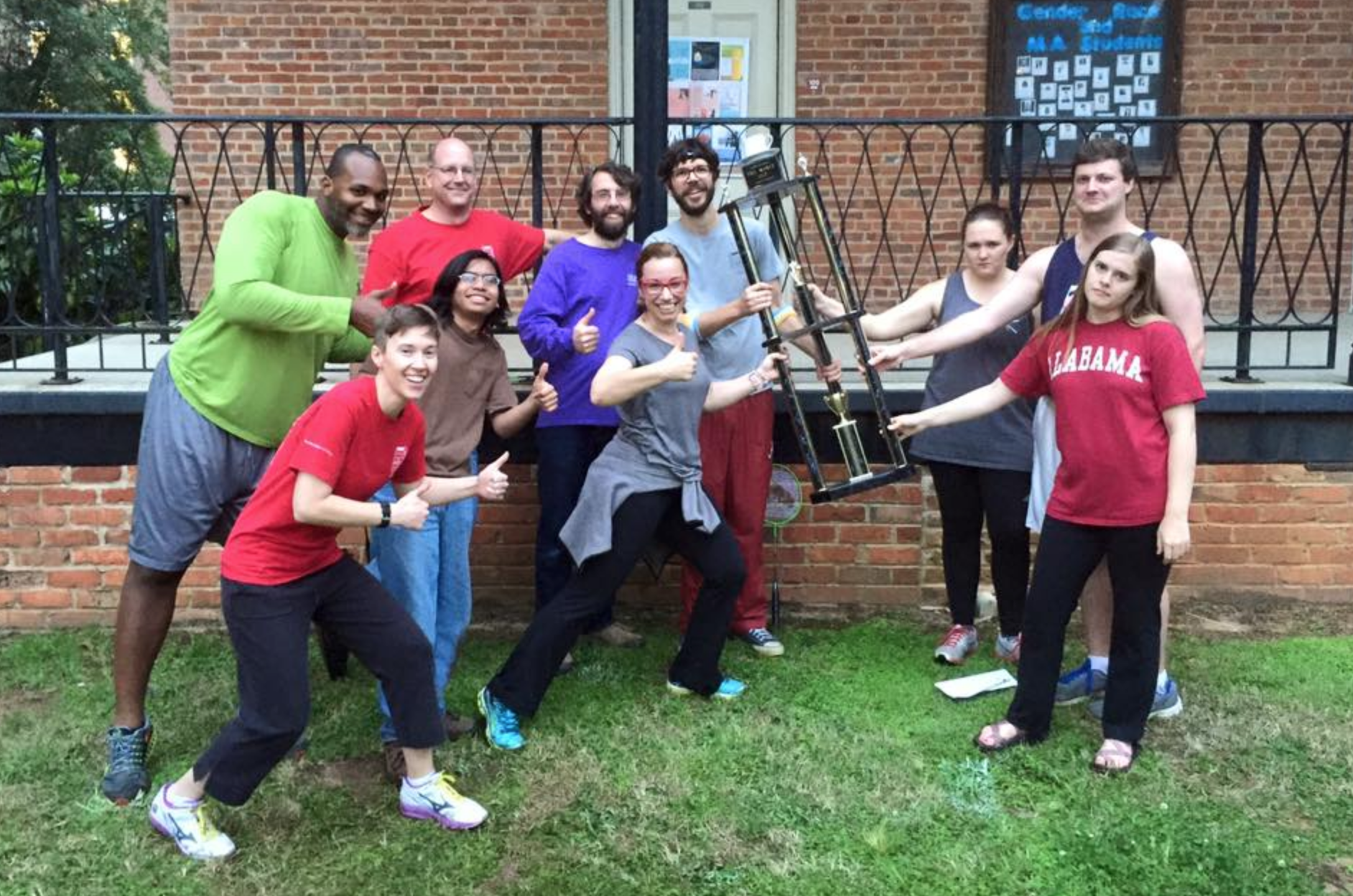 But, all good things must come to an end…. Wikipedia Races was the field on which these mortal foes met once again, last night, with some veterans from the student’s 2015 winning team returning to see if they could repeat their victory. Despite a valiant effort, and running counter to all common sense (as well as the Vegas bookies whose wagers so plague the Cup each year) the faculty were unable to repeat last year’s impressive win — did we say that it was a crushing badminton defeat for the students? 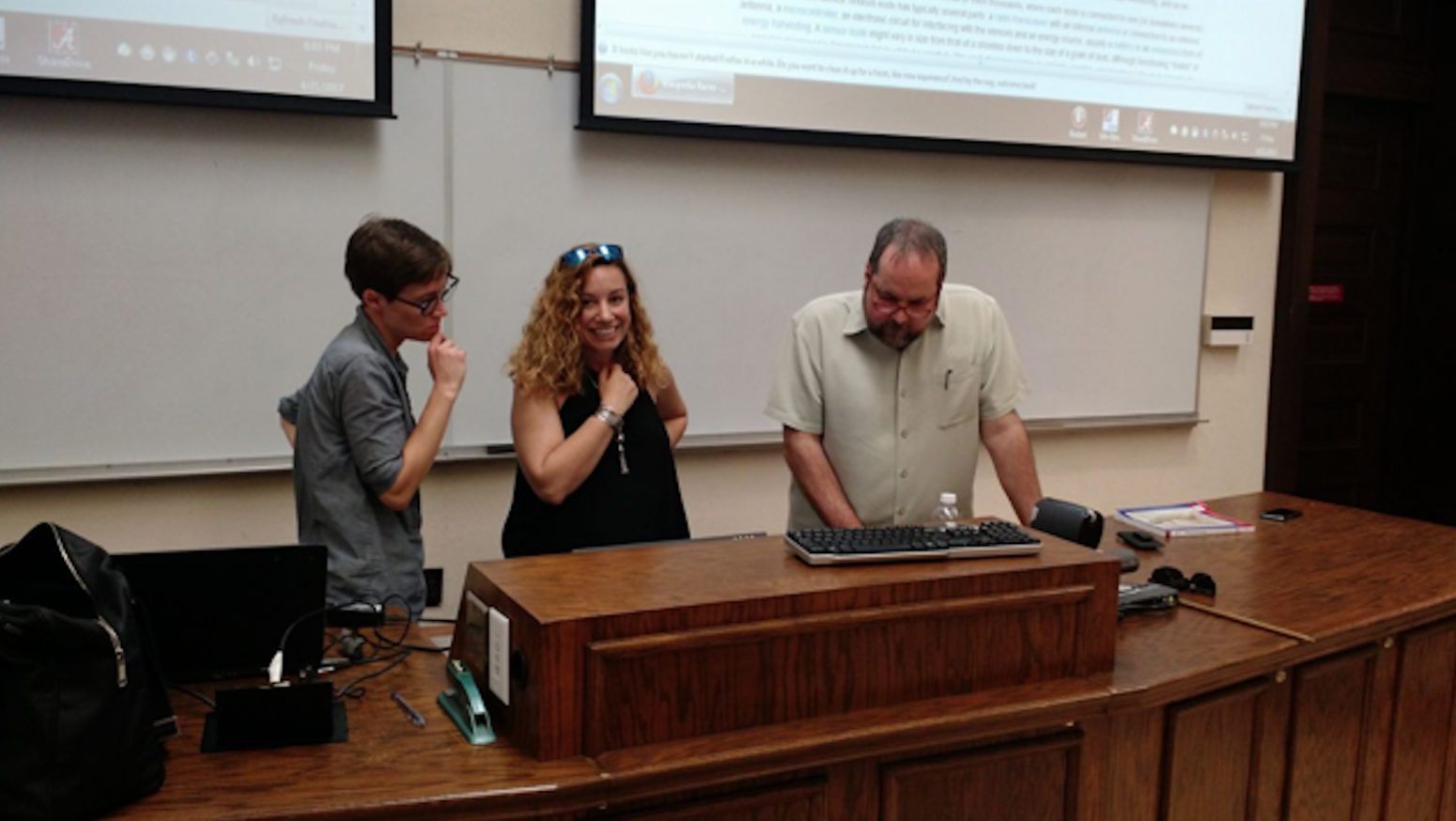 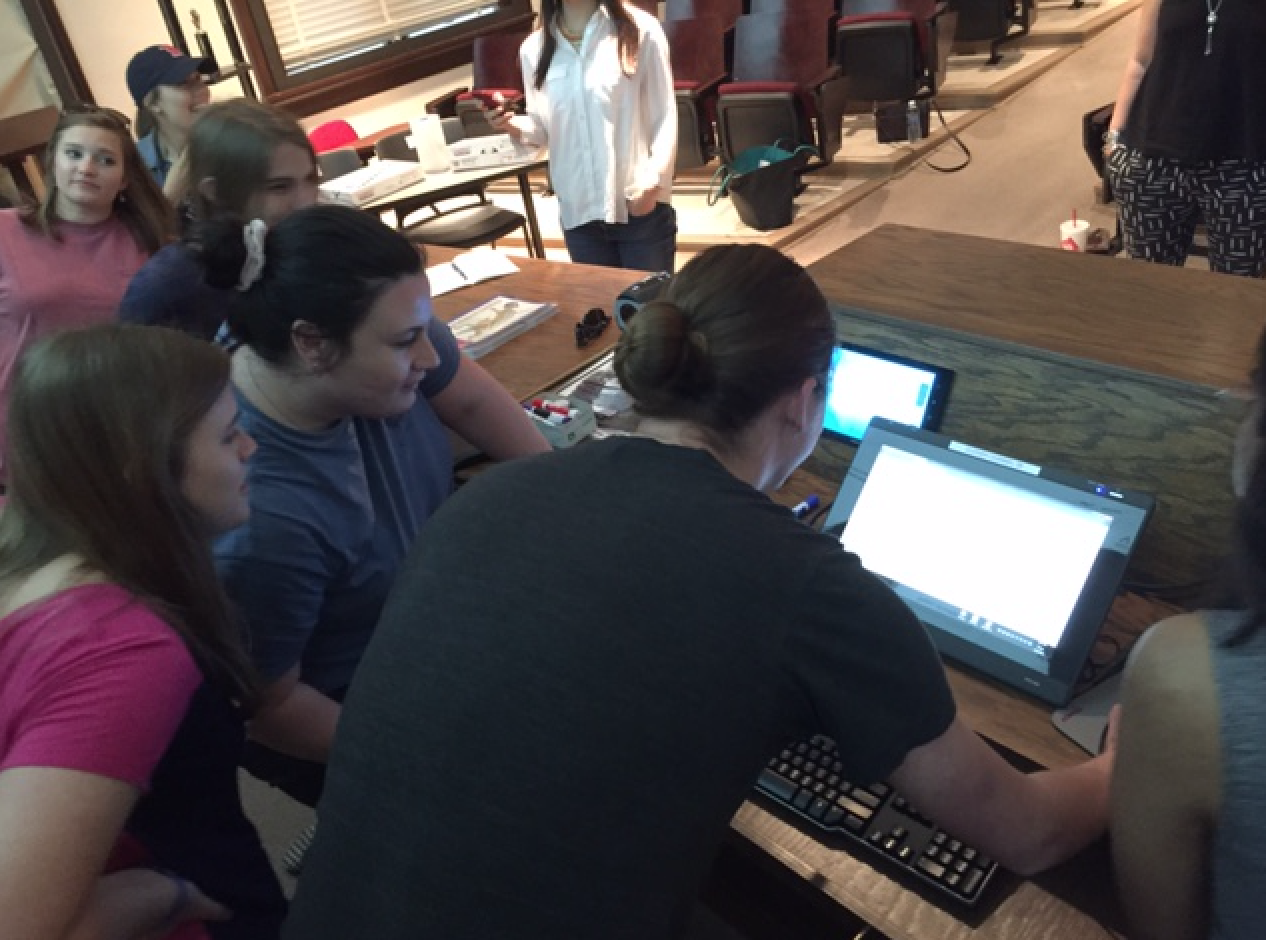 Randomly generated start and finish points were then thrown at both teams, at a dizzying pace — such as the nearly impossible task of getting from Hugh Jackman to Muhammad by only clicking on hyperlinks on Wikipedia pages. Unfortunately for the faculty (but not for Hugh, of course, let alone the students), it turns out that his ancestors came from the Ottoman empire and, voila, in 25 seconds that round was in the books.

Given that some of the faculty’s grueling rounds timed out at 5 minutes, the students’ under-30-second performance helped to clinch their eventual win. 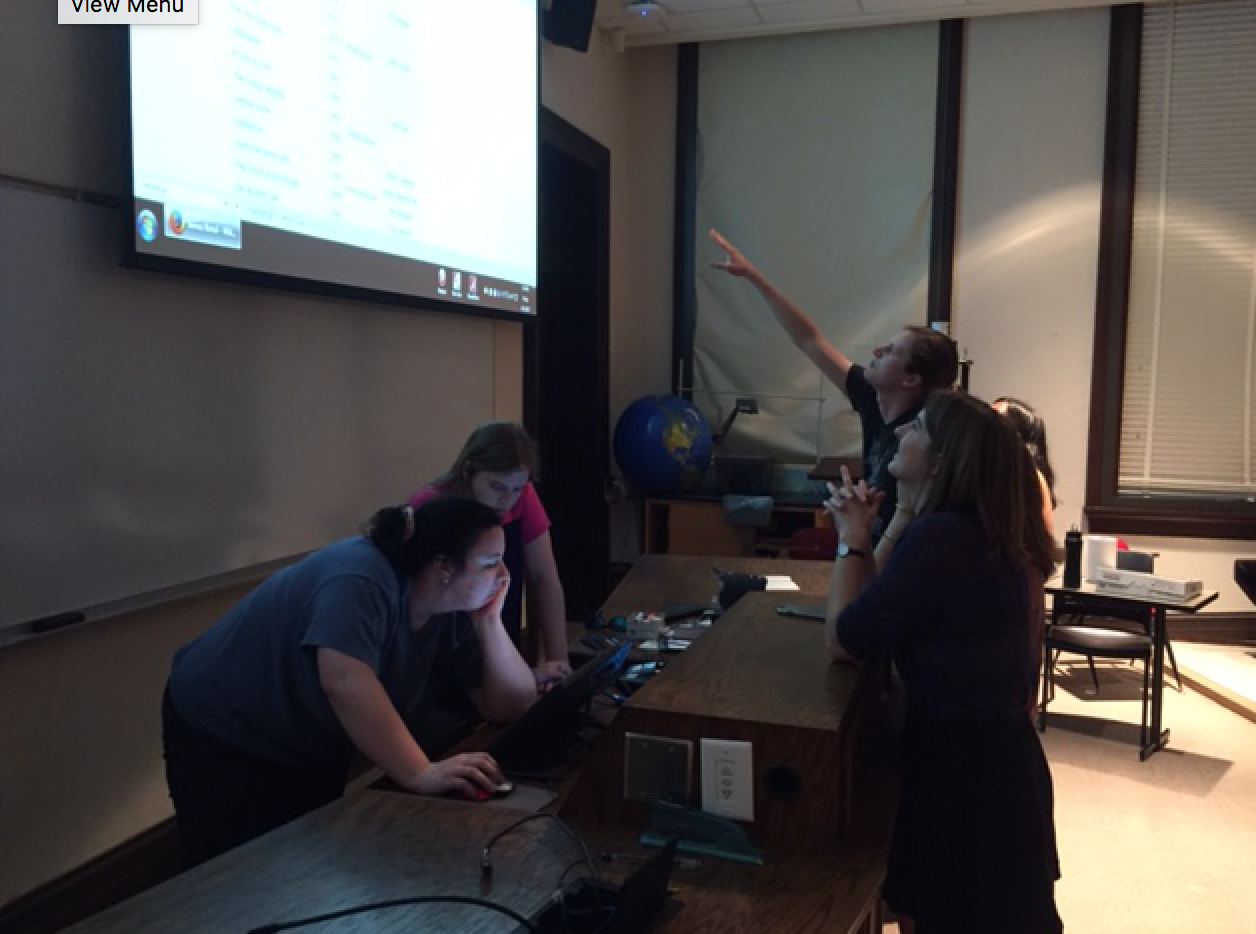 As the evening wore on, the technique and cooperative team-spirit of each team were something to behold; a particularly effective strategy was pointing at the big screen and loudly yelling “There! There!” while your teammates, working the keyboard, were looking at the monitor in the opposite direction. “Don’t just say ‘There’!” was the usual retort.

Surely their win was due to such collegial rapport. 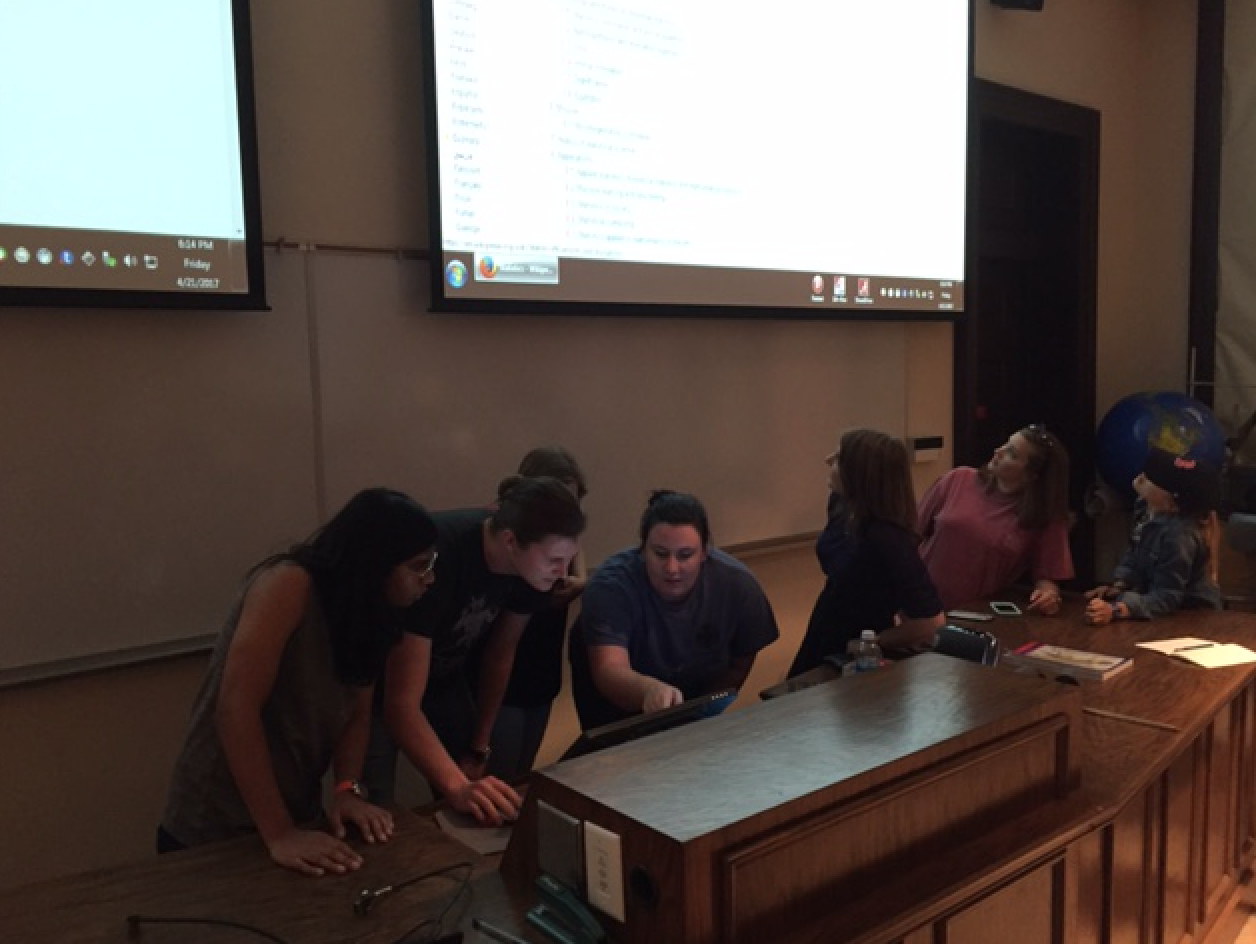 The historical knowledge demonstrated by the students was also truly impressive, such as their tactic of identifying movie stars by figuring out whether or not they were in “Citizen Kane.” This became known as the Kane Test. 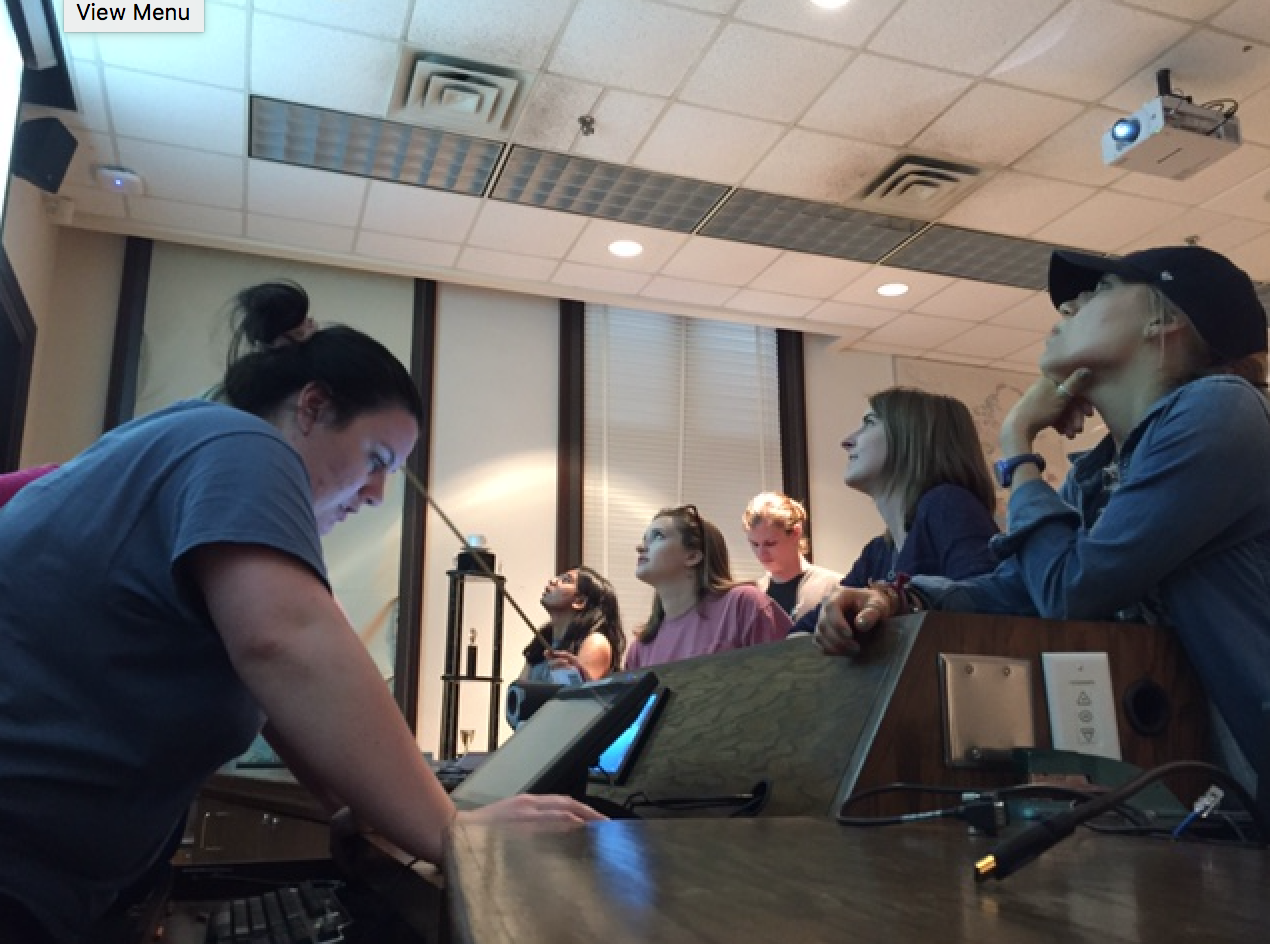 In the end, the students’ critical acumen, heavenly gazes, and pensive postures proved to be just too much of a mountain for the rag-tag group of faculty to climb. Twice the students finished their round in under a minute (if we’re to believe the time clock…) while on more than one occasion the faculty’s round timed out while they were randomly clicking links in the vain hope that their end point, such as the city of Ojai, California, would magically appear. “Time moves faster when we play!” they reasonably noted to each other, but to no avail. The faculty also contested that some of their destination pages didn’t actually exist, prompting them on two occasions to frantically circle around their goal but without ever landing. But all of their protests couldn’t match the fact that the students somehow intuitively knew that Brad Pitt wasn’t in — yes, you guessed it — “Citizen Kane.”

The Kane Test wins the day. 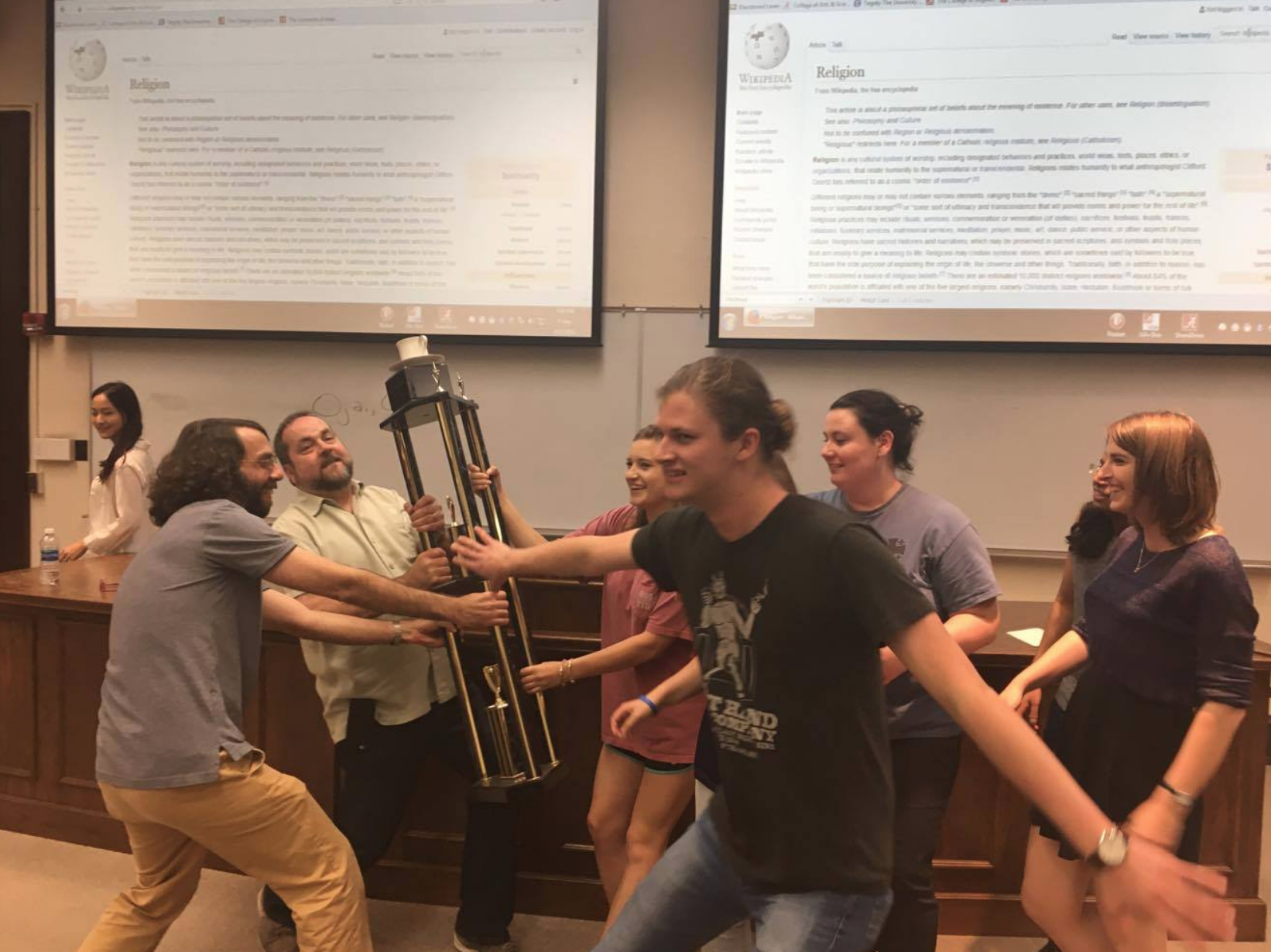 The evening ended with the time-honored ceremony of the previous year’s victors graciously handing over the trophy to its new holders. That the students have a surprisingly firm grip (linked, perhaps, to sugary donut residue from the brain food that fueled the event) was one piece of information that the faculty took away with them as they left the field of battle — that, and when we talk about football in the US we don’t mean what they call football in Europe. (The faculty’s internationalism sometimes comes at a price.) 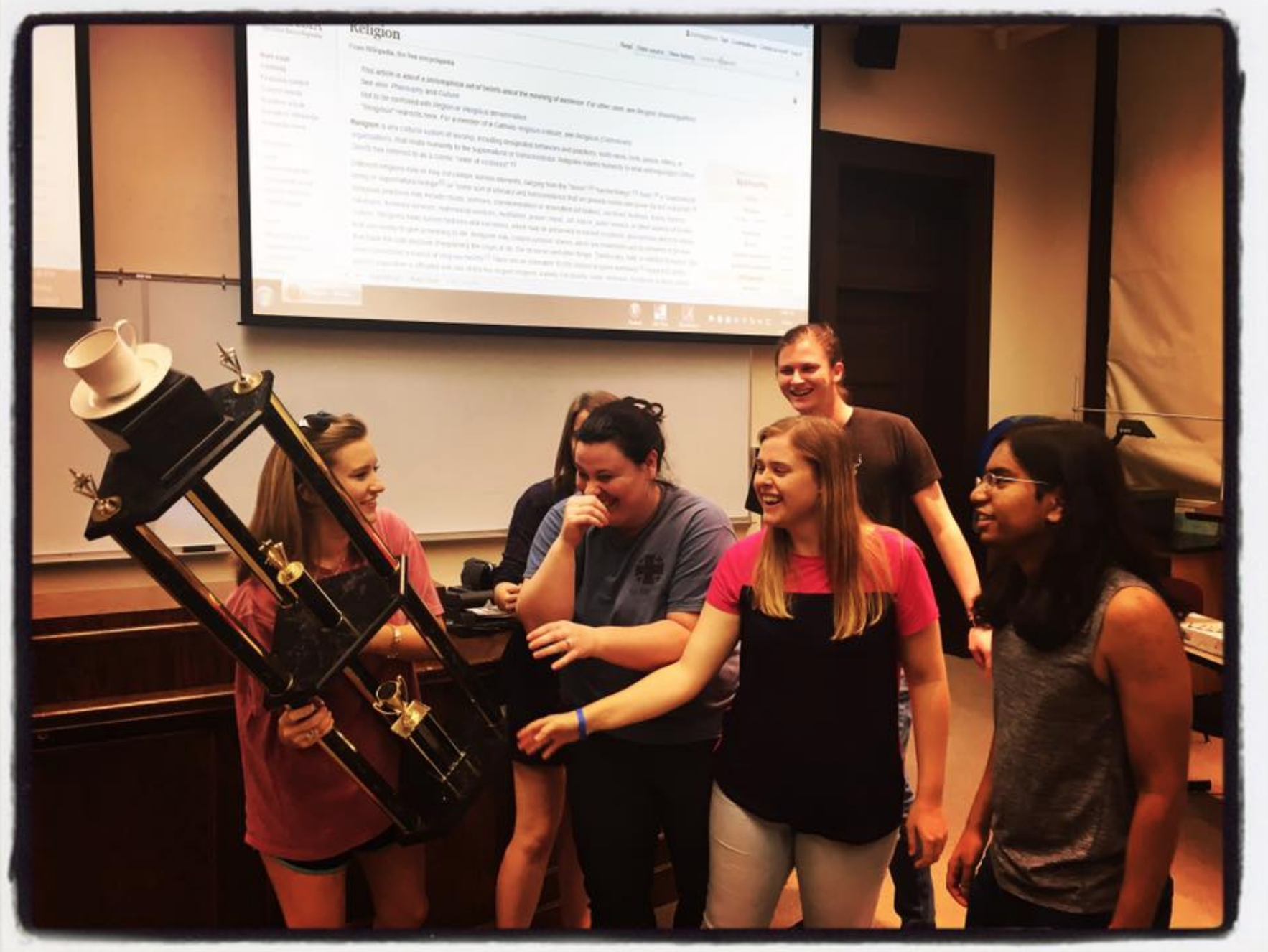 So congratulations to Caitie, Parker, Sierra, Ellie, Caity, and the two ringers that they brought in for the occasion (Emily, a recent REL grad, and Raj, who is poised to join UA as a student in the Fall).

We’ll see you a year hence for #ManlyCup2018 — bring your birdies.