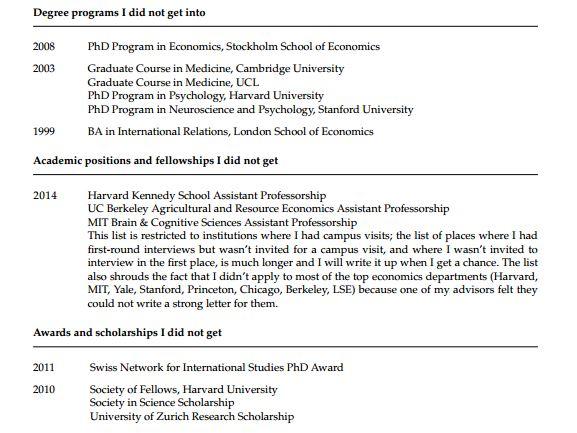 I assume you’ve seen the discussion over the past month of so around the CV of failures — a movement among some academics to publicize, and thereby make apparent to others, a list of their failures, so as to dispel the myth of merit, i.e., that success just naturally comes to those who already have the goods.

I thought of this when hearing a story on National Public Radio this morning (click here if the player doesn’t load). Give it a listen.

So, according to this study, kids are more interested in science if scientists are seen as real people, with limits and who have faced challenges of their own — people with struggles, with whom one can identify oneself, since we too have struggles.

Kids who see so-called geniuses in this new light might then stand a greater chance of becoming scientists themselves.

Which brings me back to the CV of failures: the issue is whether findings from how young kids perceive adult success can be generalized to doctoral students — one of the groups, presumably, to whom the CV of failures is aimed. For do they too idealize those ahead of them in the game (their profs and supervisors, the people they read, etc.), and thereby fail to see the behind-the-scenes missteps and regrouping that attends any career? Does seeing others in this light prevent them from imagining themselves as also having a career?

Well, if the failures are behind-the-scenes…

While being bothered by the unspoken irony that only successful professional people have the luxury of putting their failures out there for the world to see — for who else is even making a CV? — as well as the irony of how meritocracy is implicitly reinforced by making your failures apparent (i.e., “but I persevered and look where I am today!”), I admit that, early in my own doctoral career I was told a story by one of my supervisors, about how a friend of his was among the first of his doctoral cohort to get an article published. Considering his friend’s work to be rather less than superior, my prof said that he reasoned to himself, back then, that “if his shit could get published then so could mine.”

And so began his publishing career.

Although it wasn’t a systematic list of rejections, that “clay feet” story stuck with me; it functioned to level the playing field and suggest to me that each of us were making it up as we went. Sure, there were likely all sorts of structural factors that were beyond our changing, no matter how much huff and puff we put into it and no matter how positive our attitude; but, given the problems I saw in so much of what I was then reading in our field, I took that story and started to ask why wouldn’t my stuff strike someone as worth publishing and maybe even reading as well?

So I started submitting book review requests to journals.

But if you look at my CV you’ll see a lot of book reviews in the early years — I was hoping to get writing experience, experience working with editors, possibly to help make the leap to review essays and maybe eventually an article. And the free book didn’t hurt. At least that was my logic, as I recall it now, looking back.

So there may be something to making sure those behind us in the career understand that none of what they see in those ahead of them came naturally; there were lots of late nights, sure, but there was a ton of dumb luck as well — right place at the right time sort’a thing. Social life is always filled with both and who knows which way the scale will tip.

But like I said, I have some troubles with this whole CV of failures thing… — but did I ever tell you the story of how my first book manuscript was rejected twice, by two different people, within a week of each other, at just one publisher…?