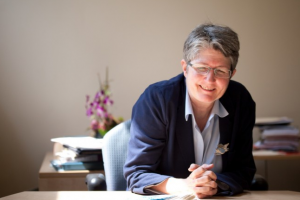 Susan Henking is President of Shimer College, an unconventional great books college in Chicago, Illinois. She got there by going to college as a first generation college goer, majoring in Religion and in Sociology at Duke University and then pursuing a Ph.D. at the University of Chicago in Religion and Psychological Studies. While there, she fell in love with undergraduate liberal education. Her scholarly work includes co-editing two books, Que(e)rying Religion (1997) and Mourning Religion (2008) as well as many articles and chapters in the fields of religion and the social sciences, and LGBTQ matters as they intersect with religious studies.  Susan was founding editor of the Teaching Religious Studies series of the American Academy of Religion and served on the AAR Board for 9 years. She taught religious studies, women’s studies and related matters for several decades and lives in Chicago and Geneva NY with her partner, Betty Bayer.

Some time ago, I was in a beautiful office high up above the streets of Chicago, looking out over Lake Michigan with a man who once led one of the most powerful energy companies in the world. He was, I discovered, a history major in college – and no, he who was not “born” to the silver spoon.

Perhaps the reason that day stands out for me is that we are surrounded by voices each and every day that dismiss the value of liberal arts degrees and most especially humanities degrees, arguing that they are either useless or a luxury.  Senator and presidential candidate Marco Rubio claimed some months ago not only that welders make more money than philosophers but that we need welders more than we need philosophers President Obama has joked about art history majors (and apologized for doing so). Failure to understand the value and importance of the humanities, it seems, is a bipartisan issue.

This failure is not only a failure of politicians. Though the show has retired, some of us still remember voices on NPR Car Talk making fun of the liberal arts. Elsewhere, there are what appear to be endless headlines and data storms about the ways that various majors affect one’s income both immediately after graduation and across a lifetime. In many cases, the headlines seem to raise the question: why would anyone do that?  What is the use of such a degree?  Isn’t it simply a luxury? Certainly, recent data shows humanities majors who actually graduate from college have an income well in excess of those with no college, but the income measure lags when compared to some other majors.

We can, of course, argue with this kind of evidence (or prejudice).  We can draw on data that shows strengths of the humanities (and liberal arts) as those most desired in today’s workplace (examples include critical thinking and the capacity to work in teams).  We can point, as I have above, to exceptional individuals who have succeeded in socioeconomic and leaderly ways.  We can argue, as the Gallup-Purdue index does, that there are other measures of life that matter, including (and do not gasp) happiness, length of life, or moral stature.

One must survive, and for those reasons income matters, but as Abraham Maslow taught us long ago, survival is not everything. Indeed, it is not enough.

While those who target the humanities often pick and choose amongst areas to critique,  religious studies is not exempted from the concerns raised here – or the value added that is highlighted in the Gallup-Purdue index. The arguments are, in some ways the same, right?

Yes. And no.  There are additional reasons why a religious studies (which I too think of as a studying religion in culture) major is a worthy degree.  To address the specifics let me point to how I answer when asked how – or why – my religious studies trained PhD connects to my work as a college president, where balancing budgets, regulatory concerns, and related matters make up much of work life.

Having said this, religious studies did prepare me for leadership of a college in several major ways that are part of what a religious studies major prepares folks for as well – whether one enters the academy or becomes, as the history major I mentioned above did, a part of the business and corporate world.

So: the humanities are, in my view valuable. Religious studies is too. They prepare us to survive – and for much much more. They do so largely because they can support our curiosity, our creativity, our humaneness and our hope.