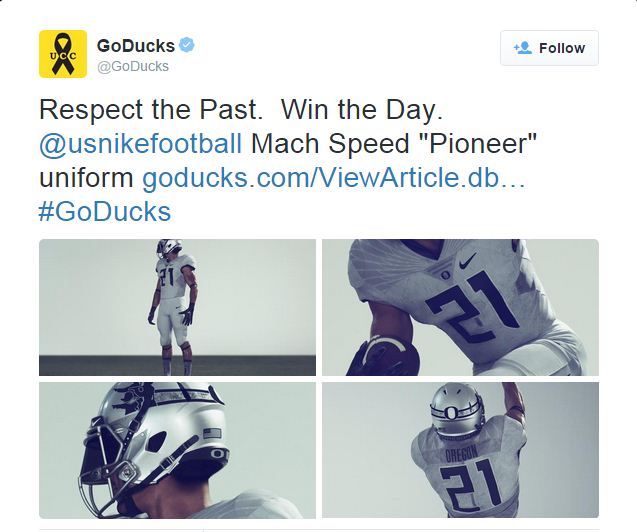 By Jared Powell
Jared Powell is a senior from Canton, Mississippi
majoring in English and Religious Studies

If you follow college football, like most folks around here do, then you’ve surely heard a thing or two about the Oregon Ducks. Oregon has carved their place as one of the most successful college teams of the past five years with an imagined rivalry with the Tide (“We want Bama” anyone?), but they also make waves week in and week out with their jersey designs. The Ducks have been known to sport bright neon green and yellow getups in games past, but the designs for the October 10th matchup against Washington State branch off in a new direction—the overt creation of an origins narrative.

If you haven’t yet seen the jersey designs, check out the above tweet from “the official Twitter account of University of Oregon Athletics.” If we take a look at the details of the uniform, we can see Oregon and Nike working together to weave a particular origins narrative, which serves a particular purpose for the future. To start, Nike is calling this uniform the “Oregon Pioneers” look and it prominently features allusions to a narrative of American exploration in the region. The helmet logo shows the Oregon duck mascot alongside Lewis and Clark, all pointing off in the distance. The jerseys and helmet have topographical maps of the state and the Oregon Trail printed on them, with each jersey highlighting a unique area. There are several other specific features, which one can read here if interested, but they all work towards the same goal, aptly summed in the pictured tweet. The jerseys call the players, coaches, fans, and students to build on the image of the trailblazing Lewis and Clark and the brave souls that traveled the dangerous Oregon Trail and use such images as the guiding light to a successful football season. Seems pretty cool, but how about the other pasts that are left out? After all, human history in Oregon doesn’t begin with Lewis and Clark, just like the history of the continent we now call North America doesn’t begin with Christopher Columbus or the Mayflower. Notice that the jerseys don’t tell the stories of the Native Americans in the region, for instance.

Of course, there are other teams that do choose to use the narratives, or at least a perceived narrative, of Native American origins as their inspiration. There’s the Florida State Seminoles, the Atlanta Braves, and who could forget the controversial Washington Redskins. But even much simpler logos and jersey ensembles can tell a narrative. For instance our beloved Tide rarely branches from the tried and true red shirt and white pants for home games. Why? Well, because it’s “tradition.” Quite clearly there’s more than just colors and clothes at play in these jerseys; there’s an origins narrative weaved into each thread.